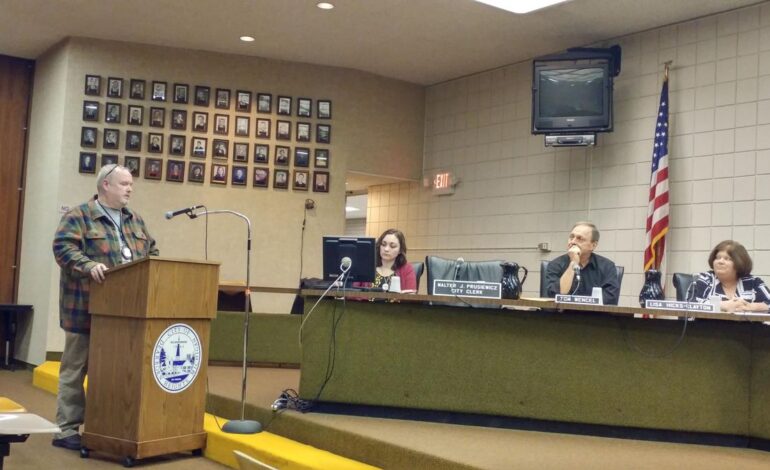 Dearborn Heights Ordinance Director Jack McIntyre (left) explained how he was entrapped for an incident that happened between consenting adults 27 years ago. Some in the community are now using that as an attack on his character.

DEARBORN HEIGHTS — During a recent Dearborn Heights City Council meeting, a resident brought a city employee’s past to the attention of the City Council.

Resident Dana Parish questioned Mayor Paletko on his knowledge of an employee’s background.

“Through the chair, I requested extra time this evening and it was approved in writing,” he said. “Mayor, when you appoint a director to a position within the city, are they subject to the same background check as other employees are?”

Paletko said that he is not responsible for all department heads in the city.

“Some of the department heads I have control over their appointment,” he said. “Some of them I do not.”

Parish again asked about background checks and the mayor’s involvement.

“The directors that you have involvement in,” he said, “that you have appointed, are they subject to the same background checks as other city employees are subject to?”

Paletko said that he believes they are and Parish proceeded to continue his questioning.

“Do any of the current directors that you have control over or you appoint have a criminal record?” he asked.

Paletko said that he is not aware of anyone on the city staff with a criminal record, but Parish said he has become aware of at least one.

“I’m aware of at least one person that may have a criminal record,” he said. “Third Circuit case number is 93-009119-01-FH. This case is a criminal sexual conduct case, a rape case, which was originally charged as a felony and plead to a misdemeanor in the circuit court in Detroit.” Parish also said that cases in circuit court have to be a felony in order to be heard in Detroit.

“This means this was a second degree, which was pleaded down to a fourth degree,” he said. “Since you’re not aware of this, are you going to check-in and verify and get back to the Council immediately?”

Parish continued to question the mayor on his appointed directors.

“And there’s no one else that you’re aware of that you’ve appointed with a criminal record?” he said. “Is that correct?”

Paletko said that he is not aware of any of this.

The department head Parish referenced, Ordinance Director Jack McIntyre, said that the case is not what it is being made out to be.

“I was struggling with who I was,” he told The Arab American News. “Twenty-Seven years ago, I was working for a hospital, raising my three kids basically on my own and I met a man who I thought was interested in the same things that I was and it turned out to be a sting operation by an undercover police officer.”

In a written statement provided by McIntyre, he explained the entire situation.

“In June of 1993, I left the funeral of a family friend and drove over to Hines Park,” the statement said. “I met a man there and he followed me to a picnic table and sat down in front of me. He gave every indication that he was interested in physical contact.”

The statement said that at that point McIntyre was informed he was being arrested.

“When I did touch him over the clothes, he informed me that I was being arrested and I was transported to a cell near Newburgh Road,” the statement said. “I elected to be released on my own instead of contacting my parents. I was charged, plead guilty to a misdemeanor charge and sentenced to two years probation.

“I completed the sentence and paid fines and costs. I was not required to register as a sex offender. I took responsibility for my part in this.”

During that time, McIntyre worked at a residential mental health treatment facility for young adults and it allowed him to remain employed.

“I was required to let the CEO and my direct manager know of the charge and probation I had received,” his statement said. “I met with an independent psychologist who released me to continue working in my capacity as a mental health worker. I worked there from 1992-1996. I also worked at Comerica Bank as vice president of operations from 1997-2004.”

This was entrapment, which isn’t even legal to do today. I won’t be defined by an incident that occurred 27 years ago with a consenting adult. —Dearborn Heights Ordinance Director Jack McIntyre

Despite this event in McIntyre’s life, he said it shouldn’t determine who he is.

“I have been in a committed relationship for 25 years,” he said. “We have raised four very successful kids together. I have grandchildren and I am very involved in their lives. You can make a poor choice, but it shouldn’t dictate your life.”

McIntyre said it’s disturbing what is being said about this incident.

McIntyre said this shouldn’t change anything or anyone’s views of him.

“I’m committed to this community and to the residents,” he said. “I love doing the job that I do, that’s why I do it every day. I am the exact same person I was two weeks ago. I made a poor choice and it never had an impact on my family status, jobs or even my church.” McIntyre also said he doesn’t know what the motivation was behind this being brought up, especially during a City Council meeting.

“I don’t think it was fair,” he said. “It should have been addressed to the mayor separately. People shouldn’t be stereotyped for a poor choice. I’m defined by so many other things and in so many other ways. I’m still the same person I’ve been for seven years with this city. People make mistakes, but it doesn’t define who they are.”