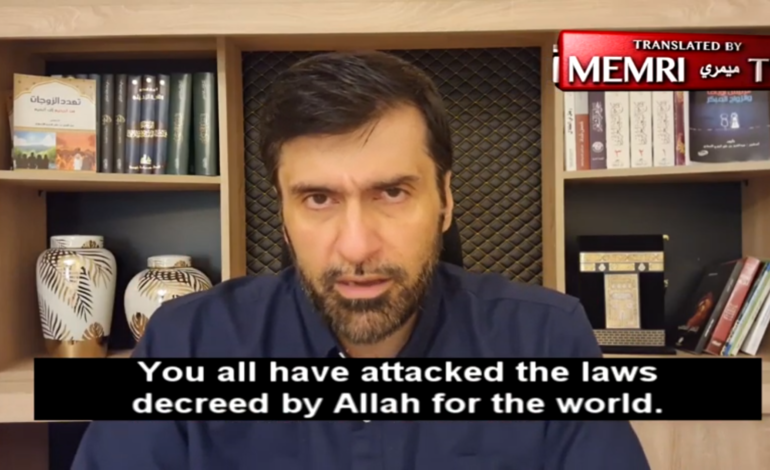 QATAR — A Qatari sociologist known for posting videos of his controversial viewpoints on YouTube, has sparked outrage once again.

The popular sociologist, Abd Al-Aziz Al-Khazraj Al-Ansari, said in his most recent video that the port explosions in Beirut is a sign of divine punishment.

“This is a message to our people of Lebanon,” he said in his video. “You all have attacked the laws decreed by Allah for the world. The number one reason for the disaster is blasphemy.”

“Dear brothers, when you go to America, Britain, to France and you meet the British or the Americans, what do they say to you?” he said. “They curse on your mother. They call on Allah to curse you and stuff like that. But when you go to Lebanon, you hear ‘may your religion be cursed. May your God be cursed, may your whatever be cursed.’”

Lebanon is famous for the prevalence of sodomy. And the abundance of homosexuals in it. In the Lebanese media, they bring people who tell sexual jokes… Can anything infuriate Allah more than this? — Abd Al-Aziz Al-Khazraj Al-Ansari

The consistently controversial Al-Ansari said that God and religion are cursed.

“Everybody curses the religion,” he said. “You curse Allah and his religion and expect him to give you success? This may be the main reason for the torment you are experiencing.”

Al-Ansari said that cursing Allah has become as prevalent as drinking water.

“The second reason is that Lebanon is famous for changing Allah’s creation,” he said. “You want to puff your lips? Augment your breasts? Change your face? Go to Lebanon.”

The sociologist also blamed the explosions on homosexuality.

“In addition, Lebanon is famous for the prevalence of sodomy,” he said. “And the abundance of homosexuals in it. In the Lebanese media, they bring people who tell sexual jokes. You all saw it and you know what I’m talking about. Can anything infuriate Allah more than this?” In Beirut, rescue workers take an injured man who was pinned under a vehicle following an explosion in the city’s port area. Mohamed Azakir/Reuters

“85 percent of Lebanese girls are not married,” he said. “What do you think they are doing? Making Origami models with the boys? Collecting stamps? Most of them are involved in forbidden relationships.”

Al-Ansari has a history of making controversial comments about women, including sparking global outrage when he posted a video in March of 2019 that he called a “tutorial on how a Muslim man should beat his wife”, which he demonstrated on a child.

“Many people, especially people who are married, would like to know how to beat one’s wife,” he said in the video from 2019. “Is beating your wife necessary? Must a man beat his wife every day? No.”

Al-Ansari went on to say that everyone must understand that the man is the leader of the house.

“A leader has authorities like a company manager,” he said. “The leader of the house may decide to discipline the wife so life can move on. How does a husband beat his wife?

“He gives her a disciplinary beating out of love, he loves her. The beating should be light and must make the wife feel her femininity and her husband’s masculinity. Let’s see how Islam teaches how to beat your wife; first, he must admonish her. Then, he should refrain from sharing a bed with her. If all that doesn’t help, we start the beating as a last resort.” The aftermath of the explosion at Beirut’s port on Tuesday, Aug. 4. Photo: Mohamed Azakir/Reuters

“Each Lebanese must go out on the street and cut out, with scissors, the tongue of anyone who curses Allah,” he said. “You want to get better? Start with that and you shall see how Allah will change your life for the better.”

Just two weeks ago, Al-Ansari posted another video regarding cutting people’s tongues out.

“The rabid dogs that oppose Islam are on the rise these days,” he said in the video posted two weeks ago. “Let no one tell me we need to approach them with ‘wisdom and beautiful preaching.’ If the Prophet Muhammad or the rightly guided caliphs were here, they would not be talking to them the way that I am talking to them. They would hang them from the gallows; these people are heretics. Strong Islam is when we are actually present and implement Allah’s law. Then the tongues of these people will be cut off.”