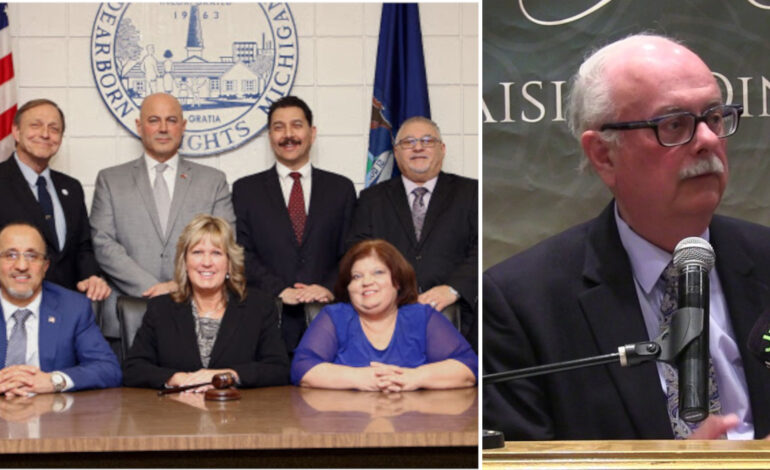 DEARBORN HEIGHTS — Despite having agreed to proceed with its financial audit during a City Council meeting in June, the Dearborn Heights City Council has overridden yet another veto by Mayor Paletko on the matter.

The latest of nine vetoes was in regards to a resolution that the Council had voted on at its July 28 meeting requesting documents pursuant to charter section 6.13.

Yet another veto and override

In Paletko’s veto, he stated his five reasons for vetoing this particular resolution, some of the reasons being the same as every other veto previously presented.

“First, most of the items sought have nothing to do with the original issues that were supposed to be the basis for the financial review,” the veto read. “Second, this makes it clear that the financial review is a politically motivated personal attack and witch hunt against me. “Third, many of the document requests are simply misdirected, where they should be directed to other city officials or offices other than those to whom they have been directed. Fourth, the City Council has failed to put any reasonable limitation on the scope of the financial review or the professional fees that will be paid for it. Fifth, this lack of any reasonable limitation ensures that the financial review is going to be outrageously expensive.”

The bigger issue stated in Paletko’s veto is the concern surrounding the request for payroll reports for as many years as possible.

“Another reason for my veto is Corporation Counsel Gary Miotke’s advice related to the requests contained in the resolution and its exhibits,” the veto read. “While he has noted several procedural problems with them, he has also expressed extremely grave concerns about paragraph three of exhibit two, which requests remote access to the payroll service used by the city to obtain detailed payroll reports for as many years as are available, going back at least three to five years.”

The veto said this is concerning as this specific request would run afoul of legal restrictions in the HIPAA, FMLA, ADA, Michigan’s Social Security Number Privacy Act and/or their related regulations.

The motion to reintroduce the resolution was made by Councilman Bill Bazzi and supported by Councilman Ray Muscat. The motion passed with a 5-2 vote, with Councilmen Dave Abdallah and Bob Constan voting no.

Muscat said this shouldn’t be continuing to happen.

“I mean we have overridden numerous vetoes on this subject,” he said. “How many times do we get to have vetoes here? This is all stemming from a financial review. I don’t see why we have to keep overriding vetoes.”

The back and forth began in Feb. 2019 when Muscat mentioned that over the past several years there were nearly $1.4 million missing from the city’s PEG fund set up specifically for special television channels.

Council Chairwoman Denise Malinowski-Maxwell said that this is the ninth veto that has been overridden as it pertains to the lawsuit, the financial review and requests for documents.

“This has cost us lots of money from Corporate Counsel Miotke to write these up for the mayor,” she said.

The back and forth on this all began in Feb. 2019 when Muscat mentioned that over the past several years there were nearly $1.4 million missing from the city’s Public, Educational and Government programming fees, or PEG fund, set up specifically for special television channels. This discovery sparked a legal battle on whether the city should have a forensic audit completed on all financial records that lasted more than 17 months, until it was finally decided during a June Council meeting that the city would in fact be moving forward with the financial review.

Paletko said in his veto that there is nothing to find.

“As I have stated many times, my administration has nothing to hide from the City Council or the public,” his veto read. “My objections to the approach taken by the majority of the City Council have been and continue to be that its approach is politically motivated, poorly considered, unnecessarily legalistic and unfairly confrontational, hostile and accusatory. To these objections, I must now add that it will unlawfully, imprudently and insensitively sacrifice the privacy of the city’s employees.”

In addition to continuously stating that the purpose of the review is politically driven, Paletko said he still believes this entire process to be a waste.

“Based on all of the foregoing, this approach has wasted and will continue to waste the time of those working for the city as well as significant amounts of precious and limited city resources,” the veto read. “To this I must now add that it may also result in employee lawsuits against the city. In vetoing this motion, I am hoping that a more constructive and prudent approach might be taken in the future.”

Paletko told The Arab American News that access to payroll records will not be provided regardless.

“My biggest issue on this is that there’s no name associated with where the information should go,” he said. “Plante Moran can provide financial records for a cost, but they haven’t been paid for their last two bills. I don’t even have access to these payroll records they are requesting because it involves healthcare.

“This request into payroll records isn’t going to happen. Their request would allow them to maneuver payroll around and what if they change someone’s rate of pay or deductions? There is information in the payroll records that is not their business.”

Paletko also said that he feels he is at a loss.

“This is going to be so expensive and I just don’t know what to do,” he said. “It’s very hard to satisfy and I believe it’s intentional so they can say I’m refusing to provide it. Almost all of the information requested has nothing to do with PEG fees. I can’t provide what I don’t have and it seems we have incompetent people that are going bankrupt this city, and we are under tight constraints as it is.”