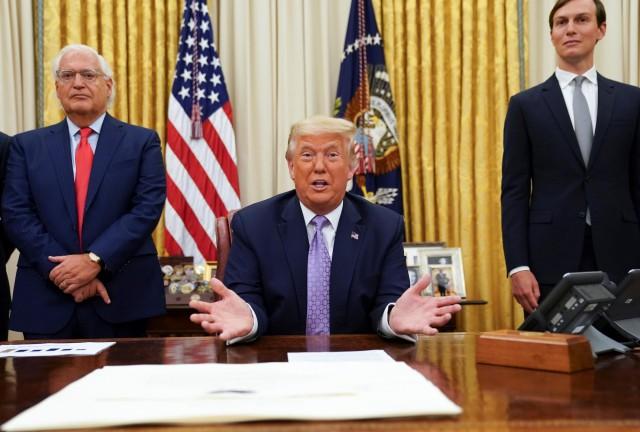 Flanked by U.S. Ambassador to Israel Melech Friedman and White House senior adviser Jared Kushner, President Trump announces that Israel and the United Arab Emirates reached a peace deal that will lead to a full normalization of diplomatic relations between the two Middle Eastern nations in an agreement that Trump helped broker at the White House in Washington, D.C., Aug. 13. Photo: Kevin Lamarque/Reuters

WASHINGTON, D.C. — Israel and the United Arab Emirates reached a “historic” deal on Thursday that will lead to a full normalization of diplomatic relations between the two nations in an agreement that President Trump helped broker.

Under the agreement, Israel has agreed to suspend applying sovereignty to areas of the West Bank that it has been discussing annexing, senior White House officials told Reuters.

The deal was the product of lengthy discussions between Israel, the UAE and the United States that accelerated recently, White House officials said.

In the White House Oval Office, Trump said discussions between the two leaders had sometimes been tense. He said similar deals are being discussed with other countries in the region. A signing ceremony including delegations from Israel and the United Arab Emirates will be held at the White House in the coming weeks, Trump added.

“Everybody said this would be impossible,” Trump said. “After 49 years, Israel and the United Arab Emirates will fully normalize their diplomatic relations. They exchange embassies and ambassadors and begin cooperation across the border.”

The U.S. officials described the agreement, to be known as the “Abraham Accords”, as the first of its kind since Israel and Jordan signed a peace treaty in 1994. It also gives Trump a foreign policy success as he seeks re-election on Nov. 3.

Netanyahu, in his first comment on the deal, said on Twitter it is, “a historic day for the state of Israel.”

Abu Dhabi’s crown prince said on Twitter that an agreement had been reached and that it would halt further Israeli annexation of Palestinian territories.

“During a call with President Trump and Prime Minister Netanyahu, an agreement was reached to stop further Israeli annexation of Palestinian territories,” he said. “The UAE and Israel also agreed to cooperation and setting a roadmap towards establishing a bilateral relationship.”

A joint statement issued by the three nations said the three leaders had “agreed to the full normalization of relations between Israel and the United Arab Emirates.”

“This historic diplomatic breakthrough will advance peace in the Middle East region and is a testament to the bold diplomacy and vision of the three leaders and the courage of the United Arab Emirates and Israel to chart a new path that will unlock the great potential in the region,” the statement said.

Brian Hook, the U.S. State Department’s lead official on Iran, said the agreement amounted to a “nightmare” for Iran in its efforts against Israel in the region.

“This deal is a significant step towards building a more peaceful, secure and prosperous Middle East,” Trump said. “Now that the ice has been broken, I expect more Arab and Muslim countries will follow the United Arab Emirates’ lead …. and normalize relations with Israel.

“We are already discussing this with other nations, very powerful, very good nations that want to see peace in the Middle East, so you will probably see others of these,” Trump added. “Things are happening that I can’t talk about, but they’re extremely positive.”

Delegations from Israel and the United Arab Emirates will meet in the coming weeks to sign bilateral agreements regarding investment, tourism, direct flights, security, telecommunications and other issues, the statement said.

The two countries are expected soon to exchange ambassadors and embassies.

The statement said that as “a result of this diplomatic breakthrough and at the request of President Trump with the support of the United Arab Emirates, Israel will suspend declaring sovereignty” over areas of the West Bank that were envisioned in the U.S. peace plan unveiled by Trump in January.

The agreement envisions giving Muslims greater access to the Al-Aqsa Mosque in the Old City of Jerusalem by allowing them to fly from Abu Dhabi to Tel Aviv, White House officials said.

The joint statement said the United Arab Emirates and Israel will immediately expand and accelerate cooperation regarding the treatment of and the development of a vaccine for the novel coronavirus amid the pandemic.

The Gulf state of Bahrain welcomed the deal.

All in all, Netanyahu paid a relatively minor price. Although the hoped-for annexation plan is on hold, a half-century status quo remains in place in which Israel maintains its occupation of the West Bank and continues to expand its scores of settlements while Palestinians live in small autonomous enclaves. Those settlements are now home to some 500,000 Israelis.

The Palestinians claim all of the West Bank, captured in the 1967 Mideast war, as the heartland of a future state. The Trump Mideast plan envisions granting Israel permanent control over 30 percent of that territory, while offering the Palestinians limited autonomy in the remainder. After embracing the plan, Netanyahu backed away from moving forward with annexation last month in the face of fierce international opposition and misgivings by White House officials.

The Palestinians have rejected Trump’s Mideast plan out of hand.

Palestinian Authority President Mahmoud Abbas convened a meeting of his top leadership Thursday night and afterward his spokesman Nabil Abu Rdeneh said the agreement amounted to “treason.” He added that the UAE must reverse the decision and urged other Arab countries not to follow suit “at the expense of Palestinian rights.”

Abu Rudeineh, reading from a statement outside the Palestinian Authority’s headquarters in Ramallah in the occupied West Bank, said the deal was a “betrayal of Jerusalem, Al-Aqsa and the Palestinian cause.”

Hanan Ashrawi, a senior Palestinian Authority official, said Israel had been rewarded for its actions in Palestinian territories since 1967.

In Gaza, Hamas called the deal a “stabbing in the back of our people.”

Moving to head off the Palestinian criticism, UAE officials said the deal had prevented the annexation and kept hopes alive for Palestinian statehood.

“The UAE is using its gravitas and promise of a relationship to unscrew a time bomb that is threatening a two-state solution,” said Anwar Gargash, the UAE minister of state for foreign affairs.

Netanyahu also came under criticism from Israeli hardliners who accused him of missing an opportunity to annex parts of the biblical land of Israel. Naftali Bennett, a pro-settler lawmaker, welcomed the agreement, but said it was “tragic that Netanyahu did not seize the moment.”

Netanyahu insisted there was “no change” to his annexation plans. He said Israel would “wait temporarily” at the request of Trump.