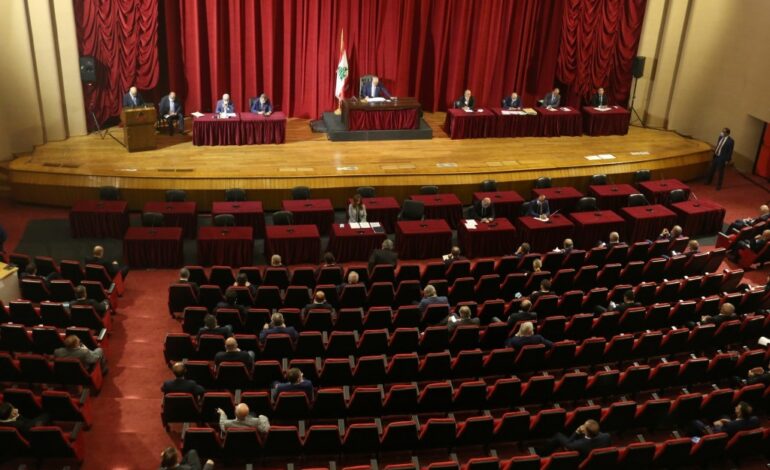 BEIRUT — Another day of unrest and protests in Beirut on Thursday, as Lebanese security forces tried to stop angry protesters from approaching a meeting of MPs. The MPs gathered for the first time since the port side blast that killed 172 people on Tuesday, Aug. 4, with dozens still missing.

The death and injury toll (estimated 6,000 wounded) is surpassed only by the hundreds of thousands left without habitable homes, in a country already facing deep financial challenges. U.S. official David Hale visited the capital on Thursday to tour the devastation.

On a tour of a demolished Beirut neighborhood, Hale, the U.S. undersecretary for political affairs, said Lebanon needed “economic and fiscal reforms, an end to dysfunctional governance and to empty promises.”

He also promised that the FBI would soon join Lebanese and international investigators to help answer questions about how and why the nearly 2,700 tons of ammonium nitrate stored on the city’s port exploded.

Lebanese President Michel Aoun has said his government and international investigators will seek to answer whether the cause of the explosion was plain negligence, an accident or possibly “external interference.”

They are all criminals, they are who caused this catastrophe, this explosion. — Lebanese protester Lina Boubess

The MPs’ meeting began with a moment of silence. Outside, security forces scrambled to block the roads leading to the UNESCO Palace on the southern outskirts of the capital, where the parliament has been meeting during the COVID-19 pandemic, in anticipation of demonstrations.

“They are all criminals, they are who caused this catastrophe, this explosion,” protester Lina Boubess, 60, told Reuters. “Isn’t it enough that they stole our money, our lives, our dreams and the dreams of our children? What more do we have to lose. They are criminals, all of them means all of them.” Protesters attack a vehicle belonging to a Lebanese MP as he arrives to the parliamentary session at the UNESCO Palace in Beirut. Photo: AFP

Parliament Speaker Nabih Berri reaffirmed that a parliament existed, despite the resignation of eight MPs and Prime Minister Hassan Diab and talks of early elections. The Lebanese government will resume in a caretaker capacity until such elections take place.

Lebanon is looking at an estimated $15 billion in losses from the Beirut blast, after already defaulting on its sovereign debt in March. The government’s talks with the International Monetary Fund (IMF) have been stalled for now.

Though humanitarian aid has poured in from various parts of the world, international donors have stressed that they will not give funds to help the country’s economy unless reforms to tackle state corruption and waste take place.

Formation of a new government not in immediate future

Since he came here, Macron is acting as if he is president of Lebanon now. Which is not bad because there is nobody today to play this role internally. — Lebanese political source

Political sources in Lebanon stressed that the formation of a new government will be a slow process.  Protesters have demanded not only the removal of the political elite, but also an overhaul of the sectarian power-sharing system in the country.

French President Emmanuel Macron, who has been at the center of international efforts to bring widespread changes to the Lebanese power structure, is pushing Lebanon’s political leaders to install an interim technocratic government to win back public confidence and release billions in aid from donors.

A senior Lebanese political source told Reuters that Macron was personally making calls to Lebanon’s rival parties as well as other foreign powers.

“Since he came here, Macron is acting as if he is president of Lebanon now,” the source said. “Which is not bad because there is nobody today to play this role internally. Nobody trusts anyone.” French President Emmanuel Macron hugs a resident as he visits a devastated street of Beirut on Aug. 6. Photo: Thibault Camus

There are talks of Macron preferring two-time former Prime Minister Saad Hariri to lead the government of technocrats, but Aoun and the Lebanon’s Christian parties have rejected such a proposal. Lebanon’s former government was backed by Hezbollah.

Macron has also spoken to Iran and Russia, who are tied up in their support for Syrian President Bashar al-Assad, in order to gain broad international support for his mediation.

France has also threatened sanctions if Lebanon’s various factions don’t bend to donors’ demands, including asset freezes or travel bans on the elite, some of whom own pricey property in Paris. Even before the Beirut explosion, France had spearheaded a donor’s conference where $11 billion was pledged for infrastructure investment, with the money hinging on reform.