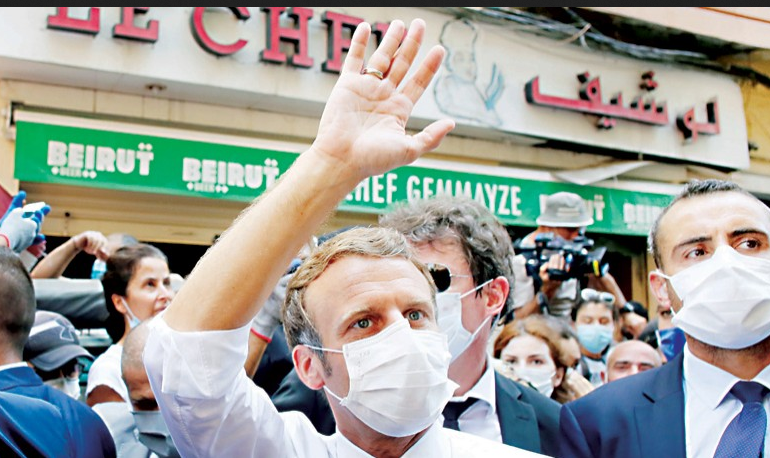 In this photo taken on August 6, French President Emmanuel Macron, center, waves in front of Beirut’s landmark traditional restaurant Le Chef during his tour of the Lebanese capital’s heavily-damaged Gemmayzeh neighborhood, two days after a the massive port explosion which devastated the city in a disaster that has sparked grief and fury across the world. Photo by AFP

French President Emmanuel Macron is in no position to pontificate to Lebanon about the need for political and economic reforms. Just as thousands of Lebanese took to the streets of Beirut demanding “revenge” against the ruling classes, the French people have relentlessly been doing the same; both peoples have been met with police violence and arrests.

Following the August 4 blast, which killed more than 200 people and wounded thousands more, the irony was inescapable when Macron showed up in a bizarre display of “solidarity” on the streets of Beirut. Macron should have taken his roadshow to the streets of Paris, not Beirut, to reassure his own people, burdened by growing inequality, rising unemployment and socio-economic hardship.

However, the French show went on, but in the Middle East. It was a perfectly choreographed scene, engineered to be reminiscent of France’s bygone colonial grandeur. On August 6, Macron stood imperiously amidst the ruins of a massive Beirut explosion, promising aid, accountability and vowing to never abandon France’s former colony. A young Lebanese woman approached the French president, tearfully imploring him “Mr. President, you’re on General Gouraud Street; he freed us from the Ottomans. Free us from the current authorities.”

It is unconvincing that all of this, the sudden visit, the pleas for help, the emotional crowd surrounding Macron, were all impromptu events to reflect Lebanon’s undying love and unconditional trust of France.

Macron could have easily assessed the damage caused by the devastating explosion at the Beirut port. If the thousands of images and endless video streams were insufficient to convey the unprecedented ruin created by the Hiroshima-like blast, satellite and aerial footage certainly would have.

But Macron did not come to Lebanon to offer sincere solidarity. He came, like a “good” French politician would — to exploit the shock, panic and fear of a dumbstruck nation while it is feeling betrayed by its own government, bewildered and alone.

“I will talk to all political forces to ask them for a new pact,” Macron said. “I am here today to propose a new political pact to them.”

Certainly, Lebanon is in urgent need of a new pact, but not one that is engineered by France. Indeed, France was never a source of stability in Lebanon. Even the end of formal French colonialism in 1946 did not truly liberate Lebanon from Paris’ toxic influence and constant meddling.

Alas, devastated Lebanon is now receptive to another bout of “disaster capitalism”:  The notion that a country must be on its knees as a prerequisite to foreign economic takeover, political and, if necessary, military intervention.

If the words of the woman who beseeched Macron to “liberate” Lebanon from its current leadership were not scripted by some clever French writer, they would represent one of the saddest displays of Lebanon’s modern politics — this woman, representing a nation, calling on its former colonizer to subjugate it once more, in order to save it from itself.

This is the crux of “disaster capitalism.”

“In moments of crisis, people are willing to hand over a great deal of power to anyone who claims to have a magic cure — whether the crisis is a financial meltdown or … a terrorist attack,” wrote the acclaimed Canadian author, Naomi Klein, in her seminal book The Shock Doctrine: The Rise of Disaster Capitalism.

Lebanon’s current tragedy is the perfect opportunity for its former colonial masters to stage a comeback.

The political fallout of the explosion — whatever its causes — were triggered perfectly from the perspective of those who want to ensure Lebanon never achieves its coveted moment of stability and sectarian harmony. Unprecedented in modern history, the country’s current economic crisis has dragged on interminably, while the ruling classes either seem to have no answers or are, largely, not keen on finding any.

On August 7, a United Nations-backed tribunal was scheduled to issue its final verdict regarding the assassination of former Lebanese Prime Minister Rafik Hariri. Hariri’s killing, also by a massive blast in Beirut on February 14, 2005, has torn the country apart and, somewhat, placed Lebanon at the hands of foreign entities.

Whether the now-postponed verdict was going to further divide Lebanese society or help it achieve closure is moot. The port explosion will surely renew the French-led Western mandate over the country.

On August 6, four former Lebanese prime ministers called for an “international investigation” into the causes of the blast, hoping to win political leverage against their political opponents, setting the stage for another sectarian and political crisis.

Local forces are quickly scrambling to position themselves behind a winning political strategy.

“We have no trust at all in this ruling gang,” leading Lebanese Druze politician Walid Jumblatt, said. He, too, is demanding an international investigation.

Times of national crisis often lead to unity, however temporary, among various communities, since mass tragedies often harm all sectors of society. In Lebanon, however, unity remains elusive, as most political camps have allegiances that transcend the people and nation. People often hold onto their clans and sects due to their lack of trust in the central government. Politicians, instead, are beholden to regional and international powers — as in Macron’s France.

But France should not be the last lifeline for the Lebanese people, despite their desperation, anger and betrayal. France is currently involved in two of the ugliest and protracted conflicts in the Middle East and West Africa: Libya and Mali. Predictably, in both cases, Paris had also promised to be a force for good. While Libya has essentially been turned into a failed state, Mali persists under total French subjugation. It is no exaggeration to argue that France is currently involved in an active military occupation of Mali, one of the poorest countries in the world.

Lebanon should be aware that its current tragedy is the perfect opportunity for its former colonial masters to stage a comeback, which would hardly save Lebanon and her people from their persisting calamity.

Macron’s bizarre and dangerous political act in the streets of Beirut should worry all Lebanese, at least those who truly care about their country.