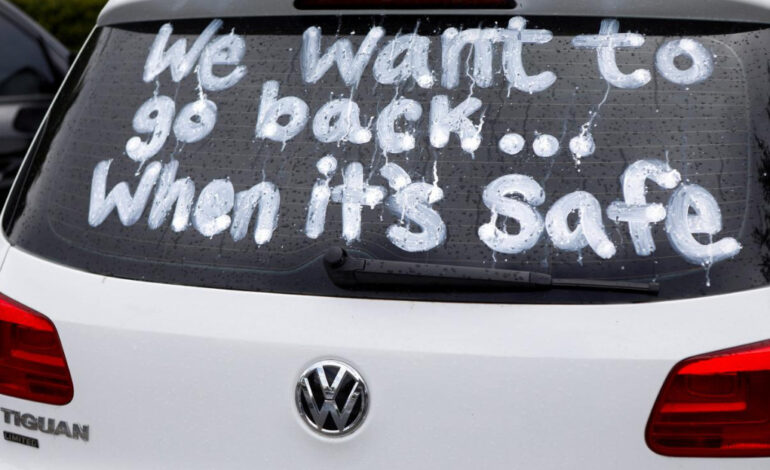 A message written on a car window is pictured as Florida teachers, whose unions are against their members returning to school, hold a car parade protest in Land O' Lakes, Florida, U.S. July 21. All photo: Reuters

WASHINGTON, D.C. (REUTERS) – On Tuesday, the Department of Homeland Security classified teachers as essential workers during the coronavirus pandemic as the Trump administration presses schools nationwide to bring students back to class.

The move comes as new COVID-19 infections have fallen for four weeks in a row in Texas and Florida, according to a Reuters tally.

The Homeland Security Department’s guidance on teachers marks the latest salvo in a political dispute over the best way to educate America’s schoolchildren until a vaccine can be found for COVID-19. The teachers’ unions have threatened to strike or sue if members are told to go back to class.

In Texas, where many schools across the vast state began in-person classes this week, a Dallas school district official said Thursday that all 155,000 students would be taught online for at least the first month of the new term.

Houston, San Antonio and Austin have also decided to begin the academic year with online-only classes.

Texas Governor Greg Abbott, a Republican, has battled against local leaders in a city where the Democratic Party holds sway. Abbott issued an executive order last month, giving local school districts — and not local health authorities — the power to determine when and how schools open.

However, the governor gave schools an eight-week maximum for the time they could offer online-only instruction, saying that if they went beyond that their state funding would be cut, though some exemptions might be possible depending on the situation with the coronavirus. In New York City, Mayor Bill de Blasio stood by his vow to reopen in-class learning beginning in September despite threats by the teachers’ union to strike or take legal action. The city’s positive test rate was 0.88 percent on Thursday.

New York City public schools, which make up the largest school district in the U.S., are due to open Sept. 10 for a blend of in-person and remote learning.

Educators in Florida and Iowa have filed lawsuits challenging plans to reopen schools in those states, while educators across the country have held protests and threatened to strike if they are forced to go back into classrooms this autumn.

Dr. Anthony Fauci, the country’s top infectious disease expert, said this week that schools in parts of the country where the rate of those testing positive for coronavirus exceeds 10 percent would benefit from easing into the new academic year with virtual classrooms.

Recent research has found that children can carry high amounts of the virus in their airways and might be more contagious spreaders, even though they typically have milder illnesses than adults.

At universities and colleges where students are heading back to campus this month, many are expecting to take classes remotely from their dorm rooms. But administrators have expressed concerns over parties and other social gatherings.

Parties at Indiana University in recent days prompted the school’s president to send out a warning email to students, according to photos of the email posted to Twitter.

“If too many of you fail to comply, our decision will be simple: We will reverse course as other universities have done and go back to all-virtual instruction,” President Michael McRobbie wrote.

Crowds of unmasked students hanging out on the Pennsylvania State University campus on Wednesday night also received a stern warning from the university president. Penn State suspended a fraternity caught hosting an indoor social gathering against the rules.

“Last night’s behavior is unacceptable,” school president Eric Barron wrote in a public letter to students threatening to switch wholly to remote learning. “I ask students flaunting the University’s health and safety expectations a simple question: Do you want to be the person responsible for sending everyone home?”