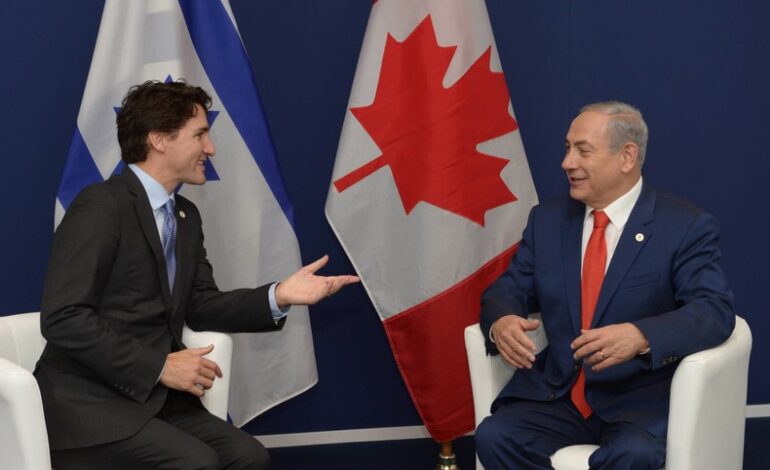 This article is cowritten by Ramzy Baroud and Romana Rubeo

The notion that “Canada is better”, especially when compared with U.S. foreign policy, has persisted for many years. Recent events at the United Nations have, however, exposed the true nature of Canada’s global position, particularly in the matter of its blind and unconditional support for Israel.

On June 17, Canada lost its second bid for the coveted U.N. Security Council seat, which, had it won, would have allowed Ottawa the opportunity to become a world leader, pushing its own agenda — and those of its allies — on the global stage.

However, this, too, was a wasted opportunity. Only 108 countries voted for Canada while 130 and 128 voted for Norway and Ireland respectively. Both these countries will be admitted to the Security Council, starting January 1.

What is striking about Canada’s missed opportunity is that it was in retribution for Canada’s bias towards Israel, at the expense of Palestine, international and humanitarian laws. Over the last 20 years alone, for example, Canada has voted against 166 resolutions supporting Palestinian rights, says Canadian author and human rights advocate Yves Engler.

Moreover, Canada has lobbied — and continues to lobby — against the International Criminal Court (ICC) investigation of war crimes in Palestine. Along with Germany, Austria and others, Canada has challenged the ICC’s jurisdiction on the matter, erroneously alleging that Palestine is not a state.

Shortly before the June vote on new Security Council members was held, a group of human rights activists circulated a letter to all U.N. members, detailing Canada’s poor record on Palestine. “Despite its peaceful reputation, Canada is not acting as a benevolent player on the international stage,” the letter read.

It added, “Since coming to power, the Justin Trudeau government has voted against more than 50 U.N. resolutions upholding Palestinian rights, even though they have been backed by the overwhelming majority of member states.”

The vote against Canada at the U.N. was understood to be a stance against Ottawa’s position on Israel and Palestine, despite Canada’s ambassador to the U.N., Marc-Andre Blanchard, going on the defensive in a desperate attempt to dissuade member states from voting against his country.

In a letter sent to all member states, Blanchard argued that an earlier document written by “a group of Canadians regarding Canada’s position on the Israeli-Palestinian conflict … contains significant inaccuracies and characterizes Canada’s longstanding policy positions.”

This succession of actions is unprecedented in recent years, where a country like Canada loses the respect and support of other U.N. member states largely due to its failure to respect the rights of the Palestinian people. To better understand the significance of this event, we spoke to Yves Engler, who played a direct role in championing the Palestinian cause and pushing for Canadian accountability at the United Nations.

Engler has also authored several books, among them Canada and Israel: Building Apartheid and Left, Right: Marching to the Beat of Imperial Canada.

“It is important for people to realize that this anti-Palestinian position that Canada pursues today is not new,” Engler said. “It is grounded in at least a century of Zionist policy in this country.”

Explaining the context of the June U.N. vote, Engler said that, “The current prime minister, Justin Trudeau, who is a liberal politician, expended a lot of energy into winning that seat; he undertook a huge campaign, called dozens of leaders around the world, lobbied very hard for that seat, but, on the first round of voting, Canada was defeated resoundingly by Ireland and Norway.”

Engler added, “In my mind, there was no issue that contributed more to Canada’s loss in its bid for a Security Council seat than its anti-Palestinian record. And, more specifically, its voting against U.N. General Assembly resolutions that almost the entire world supports, isolated Canada with the U.S., Israel, Micronesia and maybe one or two other countries.”

The Canadian setback at the U.N. should be directly attributed to grassroots activists and intellectuals like Engler.

“But how did Canada become pro-Israel?” we asked Engler.

“There is a very well-organized, pro-Israel lobby in Canada that is able to exert its influence over the media,” Engler said. “For instance, the pro-Israel group ‘Honest Reporting Canada’ concentrates on criticizing every media source that expresses even a hint of solidarity with the Palestinian cause.”

However, compared with the dynamics of Israeli influence over Washington, Canada is quite different. Unlike the U.S., Engler continues, “Canada has much clearer restrictions on the funding of politicians, so there is nobody like Sheldon Adelson, who gives a couple of hundred million dollars to Donald Trump, which, then, sway Trump to adopt even more extreme anti-Palestinian positions. This dynamic does not exist in Canada, but the dominant media has always been sympathetic to the Zionist movement.”

Encouragingly, pro-Palestinian sentiment in Canada has grown over the last 20 years or so, to become a large network, an organized movement in its own right, which has, according to Engler, to “some extent, countered the dominance of the Zionist narrative.”

Canadian media, however, is still unwilling to challenge Israel’s power in the country, leaving the stage open to “pro-Israel groups… to attack pro-Palestinian activists.”

“There is an incredible amount of trepidation, even in the pro-Palestinian movement, of being labeled as anti-Jewish,” Engler said.

Similar to the trend in other Western countries, pro-Palestine groups in Canada are small, diverse and organized at grassroots levels. These groups, “tend not to be particularly well-founded or institutionally strong, while the pro-Israel side is far better organized.”

Yet, despite the pro-Israeli influence in government and media, “polls show, repeatedly, that the public is increasingly sympathetic to the Palestinian cause than what appears in the dominant media or in the official protocol. A recent poll has revealed that Canadians are very sympathetic towards boycotting Israel for violating international law.”

A March 2017 poll indicated that 78 percent of all Canadians believe that “BDS is reasonable.” Engler sees much hope in these numbers, referring to them and to the vote at the U.N. as “small victories.”

The change is far more rewarding within labor unions in the country than in politics. “Forty years, ago… unions were aggressive in their support of Zionism; today, this is no longer the case, as many unions have passed resolutions supporting BDS campaigns.”

While Canada’s support for Israel is, to a certain extent, consistent with Canada’s own colonial past and present interventionist foreign policy, the Canadian people and the international community remain major obstacles, challenging the toxic affinity between Ottawa and Tel Aviv.

The hope is that the growing pro-Palestinian tide, predicated on respect for international law and human rights, will eventually prevail in order to sever the Canada-Israel rapport permanently, and allow Canada to earn its place as a global leader.

— Romana Rubeo is an Italian writer and the managing editor of The Palestine Chronicle.