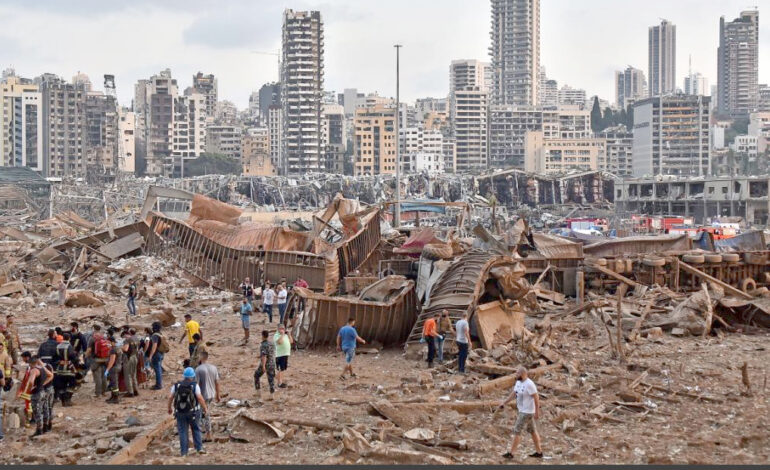 BEIRUT — Over centuries, Beirut built its reputation as a cultural crossroads, a thriving port and a playground known as “the Paris of the Middle East.” In just moments, much of it lay in ruins.

Now stunned residents come and stare at the heaps of rubble and twisted steel, contemplating all they have lost.

An elevated highway running alongside the port area — where a seismic explosion in a warehouse on Aug. 4 blasted across a wide swathe of the Lebanese capital — has become a vantage point for Beirutis.

“You look around and everything is destroyed, there is nothing left,” said Maria Rizk, a doctor, gazing over the flattened area as the sun set in the evening.

“These are the places we used to hang out,” she said. “This is a bar we used to go to; this is my friend’s house; this is the port; these are the streets we know and love.

“This is what makes Beirut and now it’s all gone. It’s beyond repair.”

Traffic slows to a crawl as drivers stare at the wasteland. One man cried in his car as he listened to a ballad by Lebanese singer Majida El Roumi, “Beirut, Set El Donya” — “Beirut, Lady of the World.”

The lyrics include, “Rise from under the rubble … rise from your sorrows.”

Beirut has suffered war and invasion over the years that have laid waste to neighborhoods, so its people are no strangers to destruction. But the city’s vivaciousness and cosmopolitan style have always emerged intact.

The port blast was of a scale never seen before, however.

“It’s heartbreaking to see,” said a student named Christelle, looking over the explosion site. “Beirut was an amazing city and this is the center of it. All tourists and all people from around the world come here to see the beauty of Lebanon and now it’s all gone.”

After night falls, a family looks over the ruins from their apartment, whose walls have been blown out. What lights are on in the city twinkle amid the darkness. They can make out the shell of a wrecked grain silo in the port.

“We are two families living here, me, my brother, his wife and my two children in this humble house,” said Ahmad Othman, a cleaner. “You can see what happened here after the explosion. Nothing is the same any more.”

On the skeletons of wrecked buildings, people have hung national flags, with Lebanon’s distinctive cedar tree emblem in their center; a sign of love of country amid the ruins.