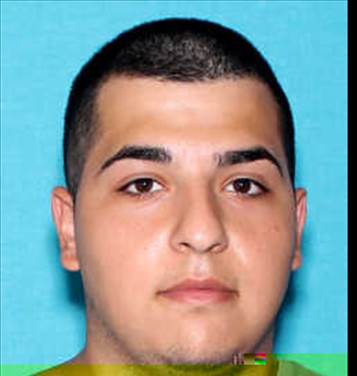 Jawad Aref Bazzi, 25, is a person of interest in a shooting that occurred on Sunday. All photos: Dearborn Police Department

Dearborn — Dearborn Police are searching for a young Arab man who may have been involved in a shooting on Sunday.

According to a release, a shooting occurred on Aug. 30 during a road rage incident near the area of Oakman Blvd. and Warren Rd. between acquaintances.  The victim was transported to Beaumont Hospital for multiple gunshot wounds.

The Dearborn Police Department is searching for a subject of interest, Jawad Aref Bazzi, a heavyset 25-year-old Arab man, 5’8’’, with black short hair and brown eyes.  He was last seen driving a silver 2020 Ford F-150 with black stripes on the driver and passenger doors, Michigan license plate DVD8076, with a black truck bed. The investigation is still ongoing. Dearborn Police Chief Ron Haddad stated, “This subject is considered armed and dangerous. Anyone with information on his whereabouts is asked to call Dearborn Police.”

Dearborn Police Captain Issa Shahin confirmed on Monday evening that Bazzi is now safely in custody. No other details have been provided at this time.