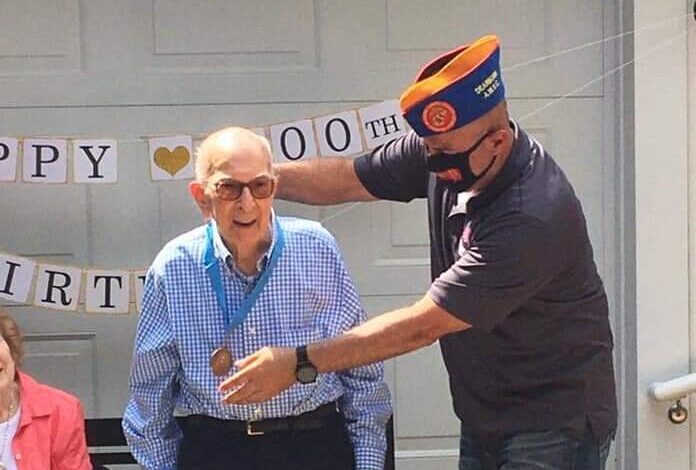 DEARBORN — A convoy of about 30 cars, 50 motorcycles, a firetruck and three police cars in Dearborn participated in ensuring one man’s birthday was one to remember.

John Dolega, a WWII veteran from Dearborn who served in the Navy from 1943-1946, celebrated his 100th birthday on Tuesday. Dolega then went to law school in 1947.

The special surprise was set up by the Exchange Club of Dearborn.

“The Exchange Club reached out to us at the Dearborn Allied War Veterans Council to see if we would want to be involved,” DAWVC Commander Bill Bazzi said. “I dropped everything to make sure we were there to celebrate John.”

While Dolega celebrated his 100th birthday, this year also marks the 75th anniversary of the end of WWII. “We awarded him with a medal of honor to commemorate the 75th anniversary of the war,” Bazzi said. “He was very excited about it and he just kept saying thank you to us.”

The medal, which was one of several made in preparation for a Veteran’s Day event coming up in November, said “Freedom is not free” on the back.

“For us military guys, medals are really important to us,” Bazzi said. “It means a lot when we are honored with a medal and that’s why we decided to award it John for his birthday.”

“I don’t think anyone realized it would be this massive,” he said. “We also had the American Legion Riders come and they alone had at least 50 motorcycles drive by. John and his wife both said this truly meant a lot to them.” Bazzi said that honoring veterans in any way is the least we can do.

“I love this stuff,” he said. “They’re truly our heroes. I love being there anytime we can honor veterans. It’s the least we can do for them and it really makes you feel like you’re one of them, and they’re one of you.”