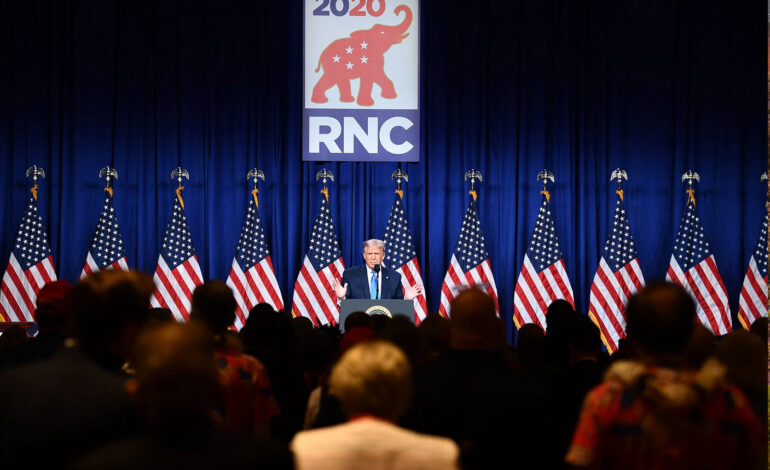 President Trump speaks during the first day of the Republican National Convention in Charlotte, North Carolina.

It is difficult — and futile — to argue which American president has historically been more pro-Israel. While former President Obama, for example, has pledged more money to Israel than any other U.S. administration in history, Donald Trump has provided Israel with a blank check of seemingly endless political concessions.

Certainly, the unconditional backing and love declared for Israel is common among all U.S. administrations. What they may differ on, however, is their overall motive, primarily their target audience during election time.

Both Republicans and Democrats head to the November elections with strong pro-Israel sentiments and outright support, completely ignoring the plight of occupied and oppressed Palestinians.

To win the support of the pro-Israeli constituencies, but especially the favor of the Israel lobby in Washington DC, Democratic presidential nominee Joe Biden and his running mate, Kamala Harris, have deviated even further from the low standards set by the Democratic Obama administration. Despite his generous financial support for Israel and full political backing, especially during Israel’s wars on the Gaza Strip, Obama dared, at times, to censure Israel over the expansion of its illegal Jewish settlements.

The Biden-Harris ticket, however, is offering Israel unconditional support.

“Joe Biden has made it clear,” Harris was quoted as saying in a telephone call on August 26, “he will not tie U.S. security assistance to Israel to political decisions Israel makes, and I couldn’t agree more.” The call was made to what the Israeli newspaper Haaretz termed as “Jewish supporters.” The Jerusalem Post and theTimes of Israel referred to this crucial constituency as “Jewish donors.”

Though the Israel lobby plays an important role in harnessing and channeling this support, Republicans are not entirely motivated by pleasing the pro-Israel lobbyists in Washington DC.

The references above are sufficient to delineate the nature of the Democratic Party establishment’s current support for Israel. Although the view of the party’s rank and file has significantly shifted against Israel in recent years, the Democratic upper echelon still caters to the Israel lobby and their rich backers, even if this means molding U.S. foreign policy in the entire Middle East region to serve Israeli interests.

For Republicans, however, it is a different story. The party’s establishment and the rank and file are united in their love and support for Israel. Though the Israel lobby plays an important role in harnessing and channeling this support, Republicans are not entirely motivated by pleasing the pro-Israel lobbyists in Washington DC.

The speeches made by Republican leaders at the Republican National Convention (RNC), held in  Charlotte, North Carolina, between August 24-27 were all aimed at reassuring Christian Evangelicals — often referred to as “Christian Zionists”— who represent the most powerful pro-Israel constituency in the United States.

The once relatively marginal impact of Christian Zionists in directly shaping U.S. foreign policy, has morphed over the years — particularly during the Trump presidency — to define the core values of the Republican Party.

“This is apocalyptic foreign policy in a nutshell,” tweeted Israeli commentator Gershom Gorenberg on August 24. In Republican thinking, “Israel is not as a real country but a fantasyland, backdrop for Christian myth.”

Gorenberg’s comments were tweeted hours before the controversial speech made by U.S. Secretary of State Mike Pompeo, America’s top diplomat, who delivered his brief notes from “beautiful Jerusalem, looking out over the old city.” The location, and the reference to it, were clear messages regarding the religious centrality of Israel to U.S. foreign policy, and the unmistakable target audience.

Trump was even more obvious during an August 17 speech in Oshkosh, Wisconsin. “We moved the capital of Israel to Jerusalem,” Trump announced to a cheering crowd, “and so the Evangelicals — you know, it’s amazing with that — the Evangelicals are more excited about that than Jewish people … It’s really, it’s incredible.”

This was not the first time that Trump has derided U.S. Jews for not being as supportive of him as they are of his Democratic rivals. A year ago, Trump called Jewish Democrats “disloyal” to Israel. “I think any Jewish people that vote for a Democrat, I think it shows either a total lack of knowledge or great disloyalty,” he said in August 2019.

This was not a simple case of Trump’s typical political insensitivity but, rather, the cognizance that the real Republican prize in the coming elections is not the Jewish vote but the Christian Zionists.

The Republican discourse seems to be detached from the traditional U.S. foreign policy view that U.S. support for Israel serves the geopolitical and geostrategic interests of Washington

In his speech before the RNC on August 27, Trump recounted to this same audience his pro-Israeli accomplishments, including the relocation of the U.S. embassy from Tel Aviv to Jerusalem in May 2018. “Unlike many presidents before me, I kept my promise, recognized Israel’s true capital and moved our embassy to Jerusalem,” Trump proclaimed.

The moving of the embassy, always a great opportunity to repeat the word “Jerusalem” before a jubilant crowd, was the buzzword at the RNC, repeated by all top Republicans, including former U.S. Ambassador to the U.N. Nikki Haley. “President Trump moved our embassy to Jerusalem — and when the U.N. tried to condemn us, I was proud to cast the American veto,” Haley announced proudly, which generated an approving cheer.

In all of their references to Israel at the RNC, Republican leaders adhered to specific talking points: Iran, the U.S. embassy move, the recognition of the occupied Golan Heights as Israeli territories, the fight against anti-Semitism (silencing any criticism of Israel) and so on.

However, the Republican discourse seems to be detached from the traditional U.S. foreign policy view that U.S. support for Israel serves the geopolitical and geostrategic interests of Washington. This view, predominant among Democrats, seems to be almost entirely forsaken by Republicans, whose love for Israel is now dedicated to a purely religious mission.

In June 2015, when he was still a congressman from Kansas, Secretary Pompeo once declared before a packed megachurch in Wichita, that the “battles” against evil is a “never-ending struggle”, one that will continue “until the Rapture”, a reference to what some Christians believe to be a sign of the end of times.

Addressing the RNC from Jerusalem on August 25, Pompeo must have felt that part of his spiritual mission has already been fulfilled.