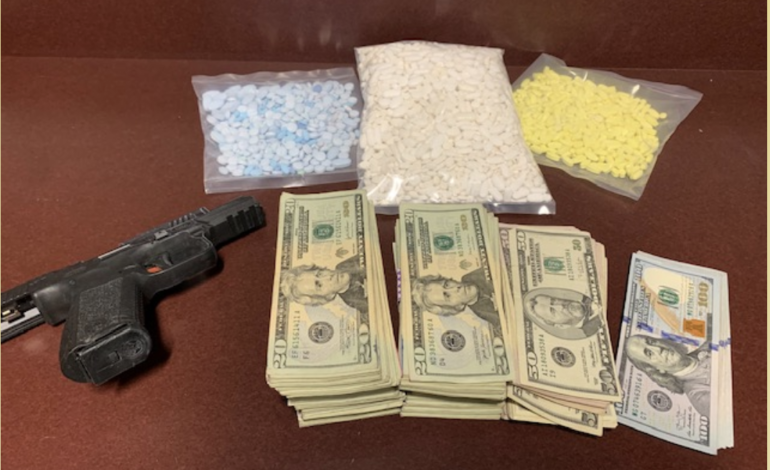 Cash, drugs and a handgun confiscated in a drug bust conducted by Dearborn Police in August. Several Arab Americans have been arrested over the last month for various offenses, including drug distribution. All photos: Dearborn Police Department

DEARBORN — Dearborn Police Chief Ron Haddad held a press conference on Thursday to update the city on recent crimes. The department also released information on several incidents and related arrests in the past few weeks.

Though the department reports a decline in crime by 18 percent, several Arab Americans involved in various related and unrelated incidents have been arrested in the city over the last month: 20-year-old Dearborn resident Hussein Ali Al-Maleki and 19-year-old Dearborn Heights resident Karim Qusai Altimimi were arrested for a drive-by shooting incident at Dearborn Ice Skating Center on Aug. 25. The Wayne County Prosecutor’s Office approved a multiple felony charges against the two. They were both arraigned on Aug. 30 in 19th District Court. A probable cause hearing will be held on Sept. 11 at 9 a.m. Jawad Aref Bazzi, 25, turned himself in on Aug. 31 for a shooting on Oakman Blvd. the day before. Bazzi had shot a 37-year-old Dearborn resident, who survived. Bazzi knew the victim from a previous incident in Dearborn, police said. Bazzi was arraigned on Sept. 2, with Judge Mark Somers issuing a $200,000 bond. Probable cause hearing is set for Sept. 11 at 9 a.m.

During the month of August, Dearborn Police arrested several people associated with a large-scale operation involving the illegal distribution of controlled prescription drugs in the city of Dearborn and surrounding suburbs.

As part of this investigation, Dearborn police officers seized a handgun and approximately $40,000 in cash and assets believed to be associated with the illegal operation. Additionally, officers seized a variety of illegal drugs, including cocaine, marijuana and more than 5,000 scheduled II and III controlled narcotics. On Thursday, Aug. 13, prosecutors from the Wayne County Major Drug Unit approved a four-count felony complaint on Hussain Al-Dukhi and Mohannad Al-Jamilawy, both Detroit residents. They were both arraigned and issued GPS tethers. Al-Dukhi was issued with a $200,000 bond and Al-Jamilawy was issued a $50,000 bond. The next court hearing will be a preliminary exam scheduled for Sept. 11 at 9 a.m. Dearborn Police also arrested Mohamed Tallib, a Dearborn resident, on Aug 24. Prosecutors from the Wayne County Major Drug Unit approved a two-count felony complaint on Tallib. He was arraigned before Judge Sam Salamey of the 19th District Court and issued a $5,000 bond. Probable cause conference is scheduled for Sept. 4 at 9 a.m. On August 28 prosecutors from the Wayne County Major Drug Unit approved a four-count felony complaint on Inkster resident Hassan Aljibory and Dearborn resident Artkeith Garrett. Both were arraigned before Judge Sam Salamey of the 19th District Court. Aljibory was issued a $30,000 cash bond and Garret was issued a $50,000 bond, both with GPS tether. Police say Aljibory is a habitual offender and currently on a GPS tether for Immigration and Customs Enforcement (I.C.E.). The next court hearing will be a probable cause conference scheduled for Sept. 11 at 9 a.m.