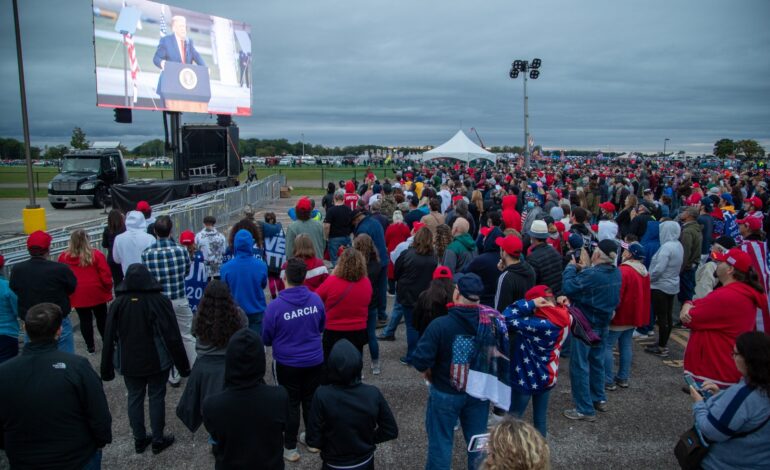 FREELAND – At a rally at an airport outside Saginaw on Thursday, Trump told thousands of supporters that he was confident he would secure Michigan once again, come November. Trump won Michigan by the narrowest margin in Michigan presidential election history in 2016.

Michigan is a key battleground state for the November presidential election and Trump’s campaign has planned large amounts of time for the state. Trump boasted of bringing back jobs to the industrial state, which are mostly false claims, while taking jabs at Democratic Governor Whitmer.

“Michigan has already gained and regained more than half of the jobs that it lost,” Trump said. “And if your state was ever allowed to safely reopen by your governor, who doesn’t have a clue, just like Joe (Biden), you would have gained far more than that.”

He added that the state would be better off if it had a governor that knew “what the hell she was doing.”

Whitmer had earlier criticized Trump for his handling of the COVID-19 pandemic, referring to a widely publicized recording in which Trump told the Washington Post’s Bob Woodward that he wanted to play down the virus while he spoke about it publicly.

“I think the biggest threat to the American people is the American president right now,” Whitmer said in a news briefing on Thursday.

The president alluded to a possible COVID-19 vaccine by the end of the year and said that the country had turned the corner on the pandemic, though he said “the fake news” failed to report this.

“Before the end of the year, we will have a safe effective vaccine and defeat the China virus,” he said, using a term for COVID-19 considered stigmatizing. “With or without it, we are coming around the turn.”

The Arab American News correspondent Abbas Al Haj-Ahmed was at the rally on Thursday. Many of thousands of Trump supporters appeared mask-less and did not appear to observe well-established social distancing recommendations.

“This is not the crowd of a person who comes in second place,” Trump told supporters.

Biden only narrowly leads Trump in Michigan, according to Real Clear Politics. The two share the stance of restoring the U.S. as a global trade and manufacturing power and unveiling a plan to impose tax penalties on products made overseas but sold in the U.S.