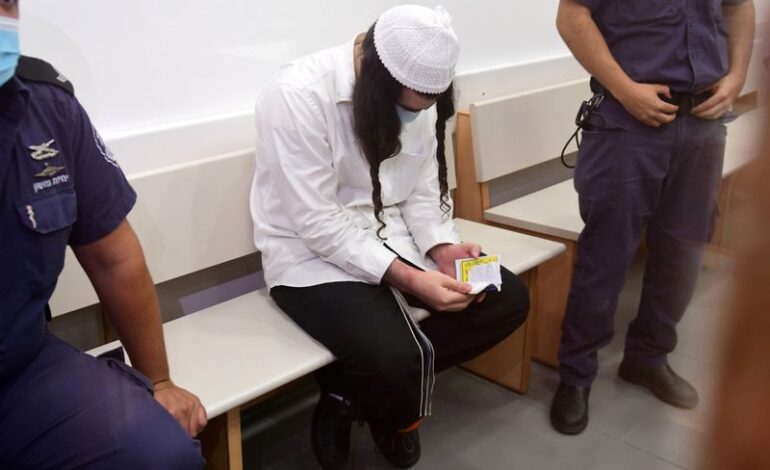 Amiram Ben-Uliel sits before hearing a verdict in the case of the 2015 arson attack, which killed a Palestinian toddler and his parents in the Israeli-occupied West Bank village of Duma, at the Central Lod District Court in Lod, Israel May 18. Photo: Avshalom Sassoni/Reuters

LOD (REUTERS) — An Israeli court sentenced a Jewish settler to life imprisonment on Monday for killing a Palestinian couple and their baby in a 2015 arson attack in the occupied West Bank.

The deaths of 18-month-old Ali Dawabsheh and his parents, Saad and Riham, in the village of Duma contributed to a surge of Israeli-Palestinian violence after peace talks stalled in 2014.

Amiram Ben-Uliel, 21 at the time of the killings, was convicted in May of three counts of murder and two charges of attempted murder in what a court determined were racially-motivated crimes.

Israel’s Shin Bet internal security service, which had interrogated Ben-Uliel, hailed that verdict as “an important milestone in the struggle against Jewish terrorism.”

But Palestinians see Israel as sluggish in cracking down on Jewish militants, compared with the speedy and sometimes lethal response by security forces to violence by Arabs.

On Monday, a district court in Lod in central Israel sentenced Ben-Uliel to three consecutive life terms for the murders and another 20 years for the attempted murders.

Ben-Uliel firebombed the Dawabsheh family home and another dwelling in Duma after spray-painting “Revenge” and “Long Live King Messiah” on their walls, the Lod court found.

Ben-Uliel has said he intends to appeal the conviction.

“He asserts his innocence and contends the confession was extracted through torture,” Ben-Uliel’s attorney, Itzak Bam, told Reuters.

But the court’s ruling said his confession included details from the arson scene that only a perpetrator could know. He was acquitted of a charge of belonging to a terrorist organisation.

A second, underage defendant in the case was convicted as an accessory as part of a plea bargain. His sentence is pending.

Israeli officials say investigations into Duma and other attacks by Jewish militants against Palestinians have been hampered by the suspects’ operating in tight-knit cells and eluding electronic surveillance.