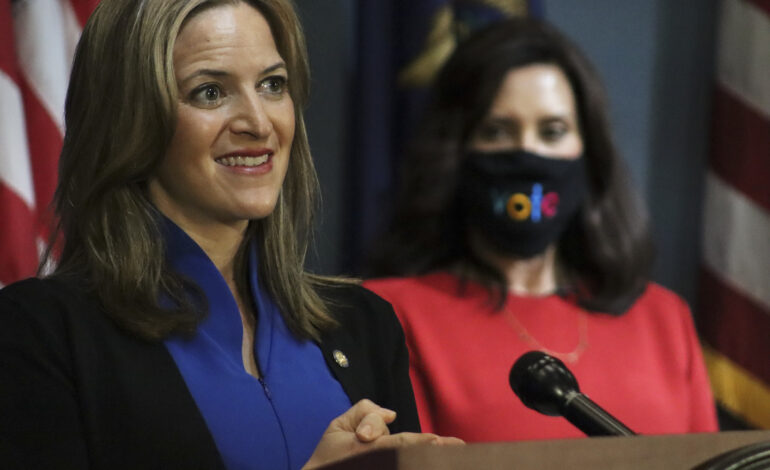 Michigan Secretary of State Jocelyn Benson appears next to Governor Whitmer at a live address from Lansing, Wednesday, Sept. 16. Photo: Office of the Governor

Benson appeared confident in the state’s ability to get through a major election under the present health crisis, though she and Whitmer urged voters to request and cast their absentee ballots as soon as possible.

“Already we’ve had three successful elections this year, which saw record turnout, record numbers of citizens voting by mail and little to no crowding on Election Day,” Benson said. “We are on track to replicate this success in November.”

Elections offices will begin sending out absentee ballots starting Sept. 24. To avoid backing up postal offices, the state is urging voters to mail ballots back as soon as possible, or drop them off at their local drop-boxes or clerk’s offices. Michigan citizens who are not registered and do not have a state ID or driver’s license can register at their local election clerk’s office.

A Michigan Senate bill passed on Tuesday allows for only a few extra hours and limited pre-processing for absentee ballots. This is in contrast to other states, which provide days for pre-processing of those ballots. Absentee ballots added to the work load on elections workers across the state during the August primary election. Some 1.6 million absentee votes were cast.

Benson said that during the primary thousands of votes were not counted because ballots arrived late or without a signature matching the one on voters’ registrations. More than 10,000 votes were rejected due to various reasons. She called on the state’s legislature to do more to avoid such disenfranchisement in November. Governor Whitmer speaks to the state from Lansing, Wednesday, Sept. 16.

In 2-1 split decision, the Michigan Court of Appeals supported a lower court’s decision that Benson was lawfully permitted to send out unsolicited absentee voter ballot applications to registered voters.

The court ruled that state law and the Michigan Constitution allow Benson to distribute unsolicited applications for absentee ballots, as the Michigan Court of Claims determined in its Aug. 25 opinion in the case, Davis v. Secretary of State.

The judges wrote that Benson acted within the directives outlined for her office in the constitution and that sending out the application fulfilled the purposes of informing qualified registered voters of their right to vote by absentee ballot, if they choose to do so.

“I am pleased that the court affirmed what we have known all along, that as the state’s chief election officer I have the authority and responsibility to ensure citizens know how to execute their right to vote,” Benson said in a statement.

A handy online tool with information on voting, absentee or not, and what’s on each voter’s ballot is available at https://mvic.sos.state.mi.us/Home/Index