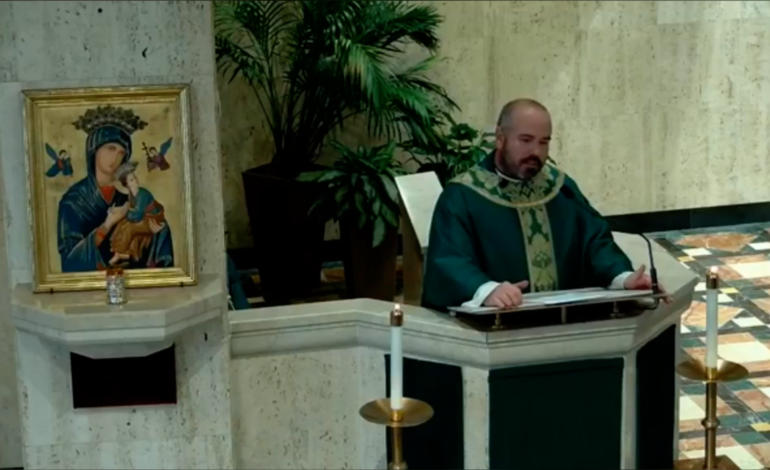 DEARBORN — The Church of the Divine Child issued out an immediate apology after an associate pastor compared Black Lives Matter protests to the 9/11 terrorist attacks.

Fr. Paul Graney delivered mass on Sept. 13, where he said that the goal of 9/11 was to destroy the United States.

“Just a couple days ago marked 19 years since the 9/11 terror attacks,” he said. “When Islamic terrorists hijacked passenger planes and flew them into the World Trade Center in New York City.

“Between the World Trade Center, Pentagon and Flight 93, 2,977 people were murdered. Over 25,000 people were injured and since that time many people have faced health issues that have come about from being at Ground Zero. This was the deadliest terror attack, not just in U.S history, but the history of the entire world. The people that flew those planes and killed those people had one thing in mind: The destruction of the United States of America.”

Graney then said that Americans prevailed despite this attack.

“They wanted to bring us to our knees and destroy us,” he said. “But we instead on Sept. 12 were remarkably resolute and courageous and as a nation we hunted down these thugs and we brought justice to them. We took a punch on the nose and we collected ourselves and came back swinging.”

Today's mass at Divine Child here in Dearborn featured a priest going on a 12 minute evangelical-style rant against BLM and how liberals want to destroy the country.Edit: The speaker in this video is an associate pastor at Divine Child. The pastor at Divine Child sent out a letter that indicated his disappointment in this and his support, if not specifically for BLM, at least for the need to confront injustice and "protect the lives of persons of color." By all accounts, and I've received many in the last 48 hours since posting this, the pastor at Divine Child does not share the beliefs expressed in this video. The Archdiocese should absolute discipline this associate pastor but I doubt they will. The saddest part that remains is how many self-proclaimed Catholics have jumped in on this post to agree with the horrific views expressed in this video. If you disagree with your pope and your pastor, maybe you need to take a look at yourself.

Above: The Sept. 13 mass delivered by Fr. Paul Graney at Church of the Divine Child in Dearborn

Nineteen years ago, it was a religious group trying to destroy us. In 2020, it is groups with the endgame of a society where there is no law, no structure, no government, even no family structure – Fr. Paul Graney

While people were proud to be American and proud of the police and fire departments at that time, Graney then said that since then, the police have become villains.

“I don’t think that a majority of America is taking this bait,” he said. “There will always be bad people until Jesus comes back.

“In 2020, many of our own people are now out there in the streets wanting to remake America into something else by destroying what it is today. It’s not by a great army, it’s riot by riot. Nineteen years ago, it was a religious group trying to destroy us. In 2020, it is groups with the endgame of a society where there is no law, no structure, no government, even no family structure. It is the perfect communist state as proposed by Karl Marx.” Graney also said that ANTIFA and Black Lives Matter are trying to create this communist state.

“If you visit ‘blacklivesmatter.com’ and go to the page where they outline what they stand for and their beliefs, there are pretty disturbing things,” he said. “First, there are good things like ‘we work vigorously for freedom and justice for Black people and by extension, all people.’

“That’s very good, that’s great. However, the organization also says this, ‘We foster a queer‐affirming network. When we gather, we do so with the intention of freeing ourselves from the tight grip of heteronormative thinking.’ As Catholics, we do not view the practice of homosexuality as healthy for human beings. In fact, it is sinful, because God did not design us to behave homosexually.”

The church has since apologized.

“I am so sorry that a homily given by Fr. Paul Graney at the 4:30 p.m. Mass on Saturday has brought forth division, anger, confusion and chaos,” said the Rev. Bob McCabe, pastor at the Church of the Divine Child, in a statement on Facebook. “I first spoke with a couple individuals shortly after his homily. I could sense their anger and their hurt.”

The Church of the Divine Child redirected The Arab American News to the Archdiocese of Detroit, which said it supports Father McCabe’s apology.

“The Archdiocese of Detroit supports Father Bob McCabe’s response and consulted with him on his apology,” Associate Director of Communications Holly Fournier told The Arab American News. “We have nothing more to share at this time, except to ask for prayers for the parish community as they navigate through this situation together.”