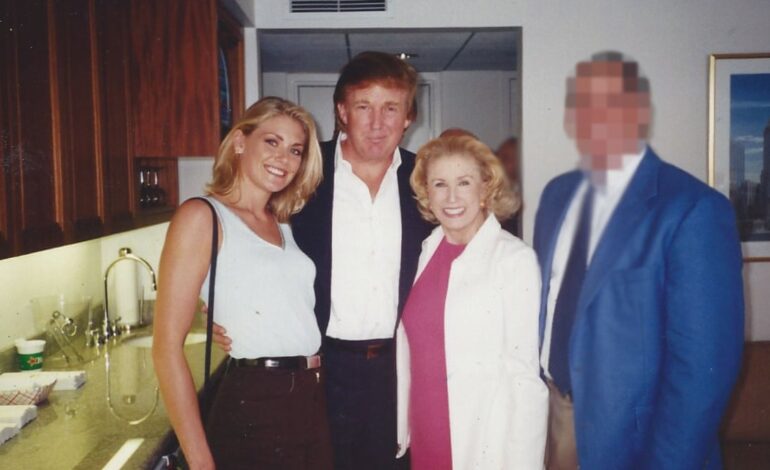 In this photo obtained by The Guardian newspaper, Amy Dorris stands Donald Trump at the US Open in 1997. She alleges the assault took place behind the partition wall in the background

Dorris alleged that Trump accosted her outside the bathroom in his VIP box at the event.

Dorris, who was 24 years old at the time, said that Trump forced his tongue down her throat, assaulted her all over her body, and kept her in a grip she couldn’t escape from.

“He just shoved his tongue down my throat and I was pushing him off,” she said in an interview with The Guardian. “And then that’s when his grip became tighter and his hands were very gropey and all over my butt, my breasts, my back, everything. “I was in his grip and I couldn’t get out of it. I don’t know what you call that when you’re sticking your tongue just down someone’s throat. But I pushed it out with my teeth. I was pushing it. And I think I might have hurt his tongue.”

Through lawyers, Trump denies having ever harassed, abused or behaved improperly towards Dorris.

Dorris told The Guardian that she didn’t come forward sooner out of fear for her family being harmed.

“Now I feel like my girls are about to turn 13-years-old and I want them to know that you don’t let anybody do anything to you that you don’t want,” she said. “And I’d rather be a role model. I want them to see that I didn’t stay quiet, that I stood up to somebody who did something that was unacceptable.”

It seemed typical of a certain guy, people who just feel like they’re entitled to do what they want… even though I was there with my boyfriend – Former model Amy Dorris

When she met Trump, she was traveling to New York with her then-boyfriend, Jason Binn, who was friends with Trump.

“He came on very strong right away,” Dorris said. “It seemed typical of a certain guy, people who just feel like they’re entitled to do what they want… even though I was there with my boyfriend.”

“Initially I thought that he was waiting to go to the bathroom, but that wasn’t the case, unfortunately,” she said. “It doesn’t matter who you are. Any time anyone says no, no means no. And that just didn’t work out for me. It wasn’t enough. I just kind of was in shock, I felt violated, obviously. But I still wasn’t processing it and just was trying to go back to talking to everyone and having a good time because, I don’t know, I felt pressured to be that way.”

Lawyers for Trump said had there been any inappropriate behavior by Trump outside of the bathroom within the VIP box, there would have been numerous witnesses.

Dorris also said that in days following Trump continued to pursue her.

“When you invade someone’s space, it doesn’t matter if you were raped, it’s sexual assault, and it’s not OK,” she said. “You don’t touch someone unless they want to be touched. And I did nothing to encourage him to touch me. I’m sick of him getting away with this. I’m tired of being quiet. It’s kind of cathartic. I just want to get this out. And I want people to know that this is the man, this is our president. This is the kind of thing he does and it’s unacceptable.”

Lawyers for Trump said had there been any inappropriate behavior by Trump outside of the bathroom within the VIP box, there would have been numerous witnesses. They also said that it seemed incredible that she would voluntarily be in the vicinity of Trump in the days following the alleged assault.

Trump’s lawyers also said that Dorris never raised the allegations with a law enforcement agency or with Trump directly and that the timing of the claims so close to the November presidential election suggested they might by politically motivated.