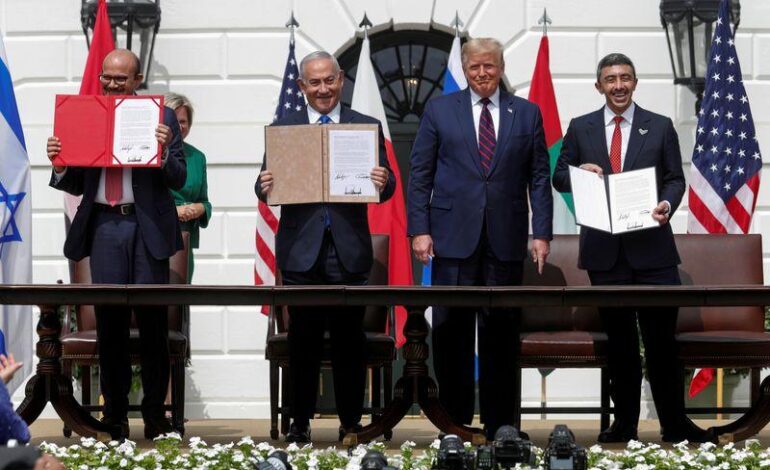 DEARBORN — So-called “peace agreements” between two Arab countries, the UAE and Bahrain, with Israel were signed on Tuesday, in a ceremony at the White House hosted by President Trump.

The normalization efforts between governments of the two Arab countries and Israel carried little consent from the people of those nations and proceeded without promise of an end to Israel’s apartheid rule in Palestine.

With the agreement, the two countries follow treaties struck long ago between Israel and both Egypt (1979) and Jordan (1994). Unlike those two nations, the UAE and Bahrain have never been involved in military skirmishes with Israel.

Netanyahu said the proceeding gave hope to “all the people of Abraham.”

The treaties opens up the potential for military and cyber security trade among the Middle Eastern countries and the U.S., like the advanced stealth F-35 fighter jets long-sought by the UAE. It also brings the two Arab nations in line with U.S. and Israeli opposition to Iran.

The agreements have been denounced by Palestinians as a betrayal of their cause, though officials in the UAE and Bahrain have attempted to reassure them of the opposite. The Arab American News spoke to several prominent Palestinian American activists and experts this week to gauge the implications of Tuesday’s agreements for Palestinians and the region in general.

Activist and community leader George Khoury said he was baffled by agreement between the Arab nations and Israel.

“This is a betrayal,” he said. “I don’t know why they would agree to these (treaties) in Bahrain or the UAE. It just doesn’t make sense; they don’t need the money, or anything else from the U.S., except to spend money to buy U.S. products.”

Khoury speculated that the treaty may ensure protection by the U.S. in case Arab people in nations now aligning themselves with Israel rose up against their ruling elite. Further, it upholds the interests of certain powerful families that will benefit from such protection and trade.

“There is every indication that Israel does not abide by any laws, has no real borders and rules (via aparthied). How can you make peace with it and be satisfied as an Arab Muslim?”

This is by no means a peace deal; this is deal that condones and militarily, politically and financially invests in occupation and apartheid — Zeina Ashrawi

Khoury said once Saudi Arabia joins the other Gulf nations in their accords with Israel, another solution to the Palestine-Israel conflict will probably be proposed, one that displaces even more Palestinians, with no hopes of anything resembling a Palestinian nation west of the Jordan River.

“As a Palestinian, this is a stab in the back,” said Zeina Ashrawi. “Not only because of the content of the deals, but because Palestinians were never involved. This is by no means a peace deal; this is deal that condones and militarily, politically and financially invests in occupation and apartheid.”

The activists and the daughter of Palestinian leader Hanan Ashrawi said that Palestinians have always known of ties between Israel and some Arab leaders, particularly in the Gulf states, but the context and timing of the deals is extremely concerning.

“The people of these countries do not agree with the deal,” Ashrawi said. “This has happened against the wishes of the Bahraini and Emirati people.”

Ashrawi said these regimes oppress their own people and are complicit in the genocide in Yemen, which shows they share mentalities with Israel. Indeed, shortly before signing, the Bahraini government prepared for opposition to the agreement by amending a law to further control parliament and banning criticism. Look at the UAE-Israel deal. It was announced about a month ago and many celebrated. The next day, Israel embarked on a 10-day bombing campaign in Gaza — Amer Zahr

Huwaida Arraf, longtime activist and co-founder of the International Solidarity Movement, called the signing of agreements on Tuesday a particularly sad display of theatrics.

“You have autocrats, racists, White supremacists and war criminals meeting to sign an agreement and trying to pass it off as progress towards peace, with Palestinians completely left out and their opposition to these deals completely ignored,” she said.

Arraf said these agreements are meant to bolster economic and military ties that will further oppress people in the region. She said the role of those who oppose these actions globally and in solidarity with Palestinians, is to continue to educate and mobilize.

Amer Zahr, a law professor and president of New Generation for Palestine, said, “We stand against normalization because such actions are in contravention to the BDS calls by Palestinian society.

“But more importantly, normalization literally costs Palestinian lives,” Zahr added. “It gives Israel cover to continue oppression and dispossession. Look at the UAE-Israel deal. It was announced about a month ago and many celebrated. The next day, Israel embarked on a 10-day bombing campaign in Gaza.”