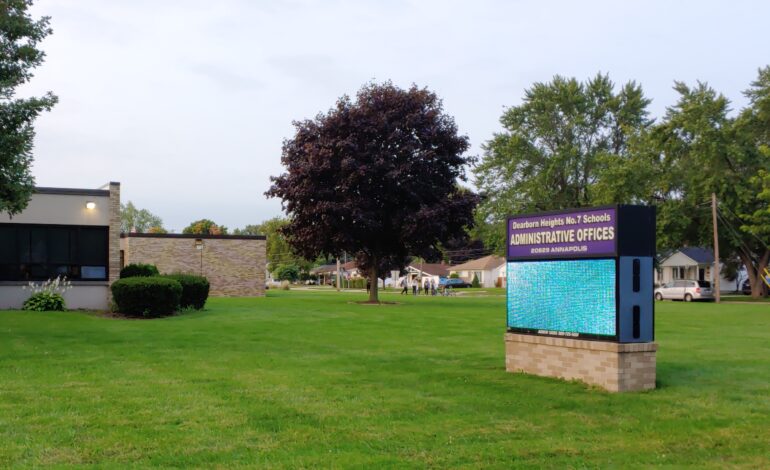 DEARBORN HEIGHTS — Tensions were high during Wednesday night’s District 7 School Board meeting when numerous parents were muted when trying to voice concerns over racism in the schools.

The cases of racism made news when Barbara Young and two of her children who are students in the district attended a Dearborn Heights City Council meeting back in August and addressed their experiences during the meeting.

Both of Young’s children told the City Council that they had experienced racism in the district when they were approached by other students that asked them for the “n-word pass.”

By asking for the “pass”, the White students were asking the Young’s permission to use the n-word. Such a request is often made in a taunting, disrespectful manner.

During the meeting, parent Leslie Windless shared a lesson about Black History prior to addressing the issues at hand.

“It bothers me that after 60 years adults are still intimidating Black children and families who integrate into majority White schools,” she said. “On Sept. 8, I attended a Dearborn Heights City Council Meeting where Councilman Robert Constan disclosed that Jennifer Mast wrote the City Council an email that stated about the Youngs.”

Windless was then cut off by Board President Mandy Diroff. “It’s not allowable according to board policy 0167.3 because it is not related to the operation of schools,” she said. “And because it is personally directed at Superintendent Mast.”

When Windless said that her statement did have to deal with the operation of schools, Diroff said she “begs to differ” and Windless was muted.

“I would like to understand,” she said. “This email is about my family and I; I am able to address it.”

Diroff cut her off as well, advising that she was not allowed to address the email in question.

Young then asked why Mast had sent an email that violated FERPA (Family Educational Rights and Privacy Act), Diroff cut her off again and Young was then muted.

In the email sent to City Council members, Mast spelled out the term “N-word pass” and said that Young was lying.

“Ms. Young’s statements about me in every other part of her public comments were absolutely false,” the email said. “The complaint about her two children being asked for a “n**** pass” was never brought to my attention during the school year.

“I have only learned about these complaints  this summer.  I was not involved in any of the investigation that took place in the schools (these situations are handled entirely by the building administrators 99 percent of the time) regarding the complaints that her children made.  I certainly did not knowingly turn a blind eye to such behaviors.  In fact, there was one incident of this same complaint that happened at one of the elementary schools last year.  That parent did, in fact, come to my office to report what had happened.  I followed up with the building principal and made sure that an investigation was done and that consequences were given.”

According to Windless, the incident from the school a few years ago was a teacher telling a student to “go back to Africa” and that teacher was only suspended for three days. Mast’s email also revealed to the City Council that the Youngs are “not their constituents.”

“I know that you have a duty to represent the community,” the email said. “I appreciate that many of you were willing to speak to Ms. Young and let her know that what happened to her children is unacceptable.

“I’m guessing that none of you realized at the time that Ms. Young and her family do not live in Dearborn Heights. They live in Detroit and come to District 7 under Schools of Choice. I only mention that because you made it clear that the City Council doesn’t govern the schools. It is also important for you to know that Ms. Young is not your constituent.”

The email also went on to say that while the district is proud of its culture, kids are kids.

“I’m not suggesting that her concerns are not valid,” it said. “We have a zero tolerance policy for any racial intimidation or racial discrimination in our schools.

“We are a Schools of Choice district and we take in nearly 50 percent of our students from outside of our district borders.  Prior to District 7 becoming a Schools of Choice district, we had VERY LITTLE diversity in our school. I am proud of the fact that so many races and cultures are represented in District 7. We welcome ALL of these students as our own.  No one is treated differently.  No one is treated like an outsider. But kids are kids. When things like this happen, we handle them immediately. There is no room for this behavior in our school system.”

When another parent, Beth Bailey, tried to provide a Black History lesson, she was cut off by Board Member Phil Shannon. “Audience participation, under Robert’s Rule of Order, is for audience members to address the board of education,” he said. “This is for items that are under board of education control or district control. This does not fit that criteria.”

Board Member Marcia LeBar interjected and argued that public comment should be allowed regardless.

“I would like to look that up, I want to make sure that’s correct,” she said. “We have to let the public speak. As long as they are not being rude or demeaning, they have a right to voice their opinions.”

Diroff interrupted LeBar and told her that what was being said did not relate to the operation of the schools and Shannon said that’s where his point of order had come from.

“Really, you guys?” LeBar said. “Do the other board members agree with that? Nobody’s going to say anything?”

Two other members spoke up and said that they agreed with Diroff and Shannon. LeBar said she wanted it to be known that she did not agree.

“I would like the record to show, if we get any complaints, that I do not agree with this at all,” she said. “I do not support this.”

Bailey was then allowed to continue to speak, but when she advised that Mast had violated several board policies, she was stopped again by Diroff and Shannon.

Anthony Young, Barbara Young’s husband, said that he doesn’t feel like he has the support of the district.

“I don’t feel like I have that with the way that my family’s name is getting tossed around,” he said. “After stating my experience as an assistant basketball coach, my son’s experience, my daughter’s experience, the first thing we were asked, instead of ‘how that experience affected our family’, was ‘did you file a complaint?’”

At the end of the meeting, Mast said that she had attended a conference last year for superintendents designed for diversity and equity training.

“After that conference I was very moved by what I heard,” she said. “I decided that I wanted racial equity to be included in our staff professional development initiatives for the 2020-2021 school year. We do go into that training with the expectations that teachers will be learning how to deal with situations that may happen in their classrooms.”