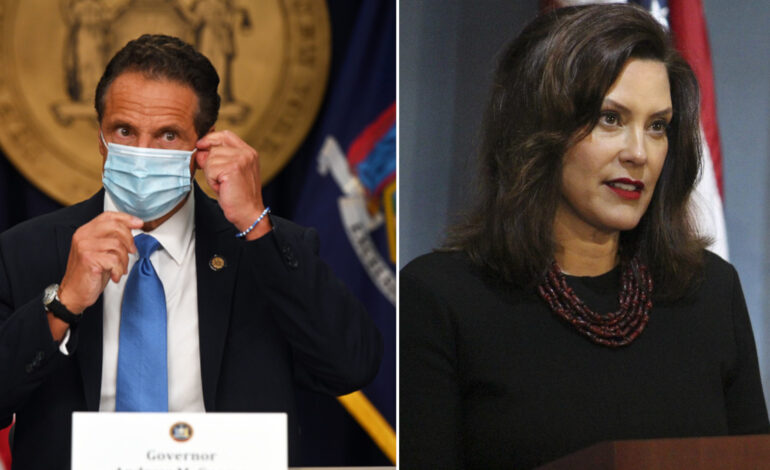 In a joint statement, Cuomo and Whitmer say the national COVID-19 tragedy is a direct result of Trump's deceit, political self-dealing and incompetence

LANSING — Governor Whitmer has joined New York Governor Andrew Cuomo in calling for a Congressional oversight investigation into the Trump administration’s politicization of the U.S. government’s response to the COVID-19 pandemic.

The pair say the administration has impeded the country’s response to the COVID-19 pandemic. The governors preside over states that have been particularly hard-hit by the pandemic and have often seen attacks from the president regarding their states’ economic closures.

“It is an inarguable fact that the United States has had the worst response to the COVID-19 virus of any nation in the world,” Whitmer and Cuomo said in a joint statement. “Nearly 7 million Americans have tested positive for the virus, and more than 200,000 Americans have been killed by it — both more than any other country. The unprecedented and unacceptable scale of this tragedy is the direct result of President Trump and the federal government’s deceit, political self-dealing and incompetence.”

The statement says that rather than turning to the advice and direction of public health experts and career public servants, Trump instead put the health and security of the American people in the hands of political appointees whose first priority was securing the reelection of their benefactor, with predictably tragic results. It also talks of the administration’s refusal to utilize the U.S. Postal Service to ship masks to every U.S. household.

“Last week’s revelation that the White House blocked a Department of Health and Human Services plan to utilize the U.S. Postal Service to ship five life-saving masks to every household in the country, free of charge, in April was heartbreaking,” the governors said. “Imagine the lives that could have been saved if every household were provided masks at such a crucial time.”

(Trump put) the health and security of the American people in the hands of political appointees whose first priority was securing the reelection of their benefactor, with predictably tragic results — Governors Whitmer and Cuomo

The governors say the CDC has objected to Trump’s U.S. Department of Health and Human Services appointees, who have published guidance that says people without symptoms of COVID-19 do not need to get tested. The agency has also abruptly reversed its guidance relating to airborne transmission. Whitmer and Cuomo call such guidance “indefensible.”

“Logic dictates that COVID won’t be the last public health challenge we will face and we can’t afford to again respond by playing politics, instead of listening to the science and facts,” the pair said. “Congress must immediately conduct an oversight investigation into the Trump administration’s response to this pandemic, including the actions at HHS and the USPS the public learned about over the past week.”

The U.S. coronavirus death toll surpassed 200,000 on Tuesday, by the far the highest number of any nation. The average is now around 800 lives lost each day, though this is a decline from the tragic numbers at the peak of the virus in April (2,806 daily deaths).