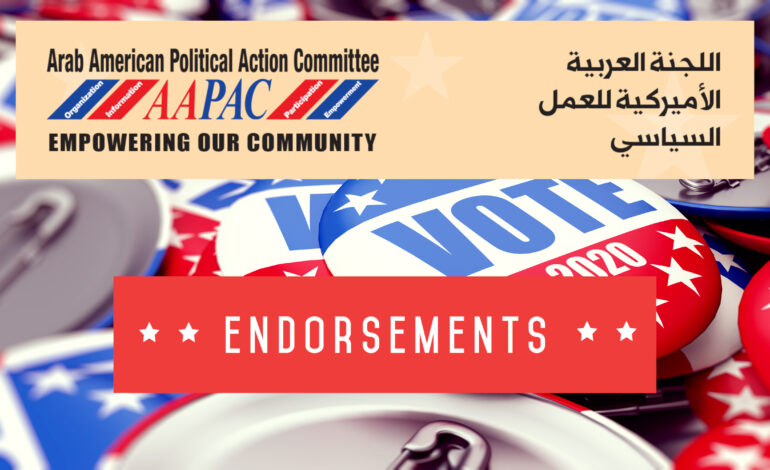 Formed in 1998 by a group of Arab American professionals, AAPAC is a non-partisan political organization that encourages Arab American participation in the political process and encourage Arab Americans to vote and run for public office, interviews candidates to discuss their platforms towards endorsement and lobbies on behalf of the Arab American causes.

AAPAC carried out some of those interviews this week. Not every endorsement is preceded by an interview, especially if the candidate has previously interviewed with the organization, has an open line of communication with the community or has an established record of public service.

An AAPAC vote for the U.S. senate race in the state of Michigan is scheduled for this weekend.

“The (meeting) was reflective of what’s going on in the country in terms of people really looking for change, holding elected leaders accountable for whatever deficiencies they may have and wanting to move things forward in the right direction,” Fadlallah said.

Former Vice President Joe Biden’s campaign reached out to AAPAC through surrogates several times since Biden effectively clenched the Democratic candidacy for president. President Trump’s campaign did not seek an endorsement from the organization.

AAPAC plans to mail out an endorsement slate to inform the community of its chosen candidates in the coming days.

A discussion over Dearborn School Board candidates brought some concerns over the handling of elections in Dearborn City Hall, concerns articulated by AAPAC member Hussein Dabajeh.

An article with details about the school board election ballot issue appears in this issue of The Arab American News.

“When sample ballots came out, a fourth name popped up (in the two-year term race between three candidates),” Dabajeh said. “It’s someone I have the utmost respect for, Maali Luqman, who was actually originally running for the six-year term.

“I don’t believe he was very clear when we called him,” Dabajeh added, referring to Dearborn City Clerk George Darany. “He ended up saying Maali accidentally applied for the two-year term, so the county clerk made the city change the ballot. The clerk should have then notified the candidates running, so that they know that there’s an update to the field.”

Dabajeh said errors during elections is not a new occurrence and is in fact symptomatic of repeated mishandling of the election process at the Dearborn City Clerk’s office.

MSU Board of Trustees — Brian Mosallam

One seat for two-year term