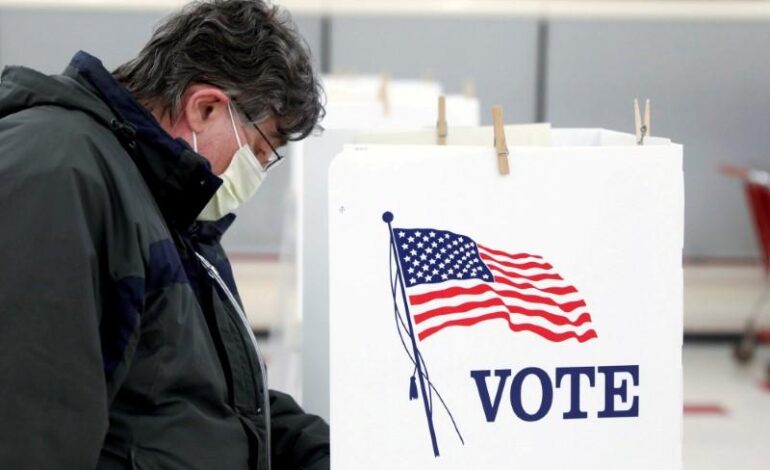 WASHINGTON, D.C. (REUTERS) — U.S. security officials are warning that violent domestic extremists pose a threat to the presidential election next month, amid what one official called a “witch’s brew” of rising political tensions, civil unrest and foreign disinformation campaigns.

FBI and U.S. Department of Homeland Security (DHS) memos say threats by domestic extremists to election-related targets will likely increase in the run-up to the Nov. 3 election.

Those warnings so far have largely remained internal. But New Jersey’s homeland security office took the unusual step of publicly highlighting the threat in a little-noticed report on its website last week.

“You have this witch’s brew that really hasn’t happened in America’s history. And if it has, it’s been decades if not centuries,” said Jared Maples, director of the New Jersey Office of Homeland Security and Preparedness, which published the threat assessment.

Nationwide protests in recent months over racial justice and police brutality have been largely peaceful, but some have led to violent confrontations, including between extremist factions from the left and right.

The United States is grappling with the coronavirus pandemic, high unemployment and a contentious presidential election in a polarized political climate.

Last week President Trump declined to commit to a peaceful transfer of power if he loses the election to Democratic rival Joe Biden. Trump has sought to cast doubt on the legitimacy of the election because of his concerns about mail-in voting, which Democrats have encouraged during the coronavirus pandemic.

Documented cases of mail-ballot fraud are extremely rare and election experts say it would be nearly impossible for foreign actors to disrupt an election by mailing out fake ballots.

A recent internal FBI bulletin warned that domestic extremists with varying ideologies would likely pose an increasing threat to government and election-related targets in the run-up to the election, according to a person familiar with it. The bulletin was first reported by Yahoo News.

An FBI spokeswoman said the agency “routinely shares information with our law enforcement partners in order to assist in protecting the communities they serve”, but declined to comment on the specific document.

A DHS memo dated Aug. 17 said ideologically driven extremists and other actors “could quickly mobilize” to engage in violence related to the election. The document, also first reported by Yahoo News, was confirmed to Reuters by a person familiar with it.

The memo said that lone offender White supremacists and other lone offenders with “personalized ideologies” pose the greatest threat of deadly violence.

A DHS spokesperson directed Reuters to early September remarks by acting Secretary Chad Wolf, in which he said that the department “has taken unprecedented actions to address all forms of violent extremism, to specifically include threats posed by lone offenders and small cells of individuals.”

Trump and his top officials have not so far publicly highlighted any threat by violent extremist groups to the election.

Trump officials have pointed the finger at left-wing anarchists and anti-fascists during protests against police brutality and racism over the summer, but federal court records provide little evidence showing those arrested for violent acts had affiliations to far-left groups.

Last week, the top two DHS officials acknowledged in congressional hearings, however, that White supremacists have posed the most lethal domestic threat to the United States in recent years.

White supremacist, anti-Semitic, anti-government and related ideologies were tied to 77 percent of 454 alleged domestic extremist murders in the past decade, according to data compiled by the Anti-Defamation League, a New York City-based anti-hate advocacy organization, and presented at one of the congressional hearings last week.

National Security Council spokesman John Ullyot told Reuters that Trump’s highest priority is “protecting the U.S. from all threats, both foreign and domestic” when asked if the president had addressed the election threat publicly.

Maples, the New Jersey homeland director, said his agency did not issue a pre-election threat assessment in 2016, but that it was necessary this time around.

“We want our allies and folks across the state to recognize that we need to be thinking about this,” he said.

The New Jersey report outlines three possible scenarios for the November election: A quick election outcome, a protracted process where determining a winner takes months and a legal battle that eventually goes to the Supreme Court.

Each of the scenarios could lead to extremist violence, with the possibility of deadly confrontations between protesters and targeted violence toward police officers, the assessment concludes.

The agency’s report says the extremists will likely be “anarchist, anti-government and racially motivated”, but does not say which groups pose the greater threat.

The domestic extremist threat has always been present, but is getting more attention this year, according to Mike Sena, president of the National Fusion Center Association, which represents state-run “fusion centers” staffed by federal, state and local public safety personnel who monitor threats and facilitate information sharing.

“We have always had threats during the national election cycles from violent extremists, including terrorist organizations,” he said. “With current events, it is more in the spotlight than ever.”

The Washington-based Center for Strategic and International Studies, a bipartisan think tank, said in a June report that the outcome of the election could incite violence by the far-right or far-left.

“If President Trump loses the election, some extremists may use violence because they believe — however incorrectly — that there was fraud or that the election of Democratic candidate Joe Biden will undermine their extremist objectives,” the report reads. “Alternatively, some on the far-left could resort to terrorism if President Trump is re-elected.”