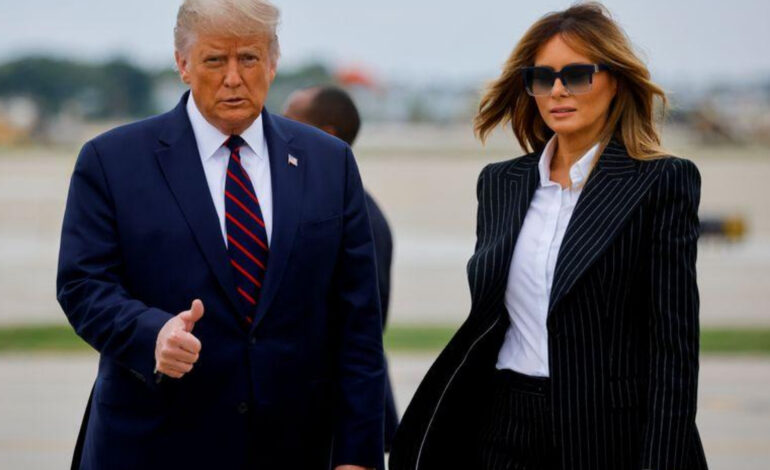 WASHINGTON, D.C. (REUTERS) –  On Friday, President Trump said  that he and his wife, Melania, had tested positive for COVID-19 and were going into quarantine, upending the race for the White House.

“We will begin our quarantine and recovery process immediately. We will get through this TOGETHER!” the president said in a late night tweet.

Trump, 74, is at high risk for the deadly virus both because of his age and because he is considered overweight. He has remained in good health during his time in office, but is not known to exercise regularly or to follow a healthy diet.

Trump played down the virus in its early stages and has repeatedly predicted it would go away.

More than 200,000 people have died from COVID-19 in the United States alone, with the elderly and those with pre-existing conditions especially hard hit.

The president rarely wears a mask and has ridiculed others, including Democratic presidential nominee Joe Biden, for doing so regularly. Health professionals say that face coverings are key to preventing the spread of the virus.

Biden has criticized Trump sharply for his response to the pandemic, while the president has touted his own management of it.

Trump, who is tested regularly for the coronavirus that causes COVID-19, has held rallies with thousands of people in recent weeks in the run-up to the Nov. 3 election, despite warnings from public health professionals against having events with large crowds.

On Thursday night the president predicted that the end of the pandemic was in sight. Shortly thereafter, news broke that Hope Hicks, a top adviser and trusted aide, had tested positive for the virus. Hicks traveled with the president on Air Force One on Tuesday and Wednesday.

The White House issued a new schedule for Trump’s activities on Friday that did not include his planned trip to Florida. Biden is scheduled to campaign in Michigan on Friday. Both states are swing states that could decide the election.

Trump, who has been criticized for questioning the efficacy of wearing a face covering, produced a mask from his pocket in the first presidential debate on Tuesday and said, “I wear masks when needed. When needed, I wear masks.”

He then ridiculed Biden for wearing them regularly.

“I don’t wear masks like him. Every time you see him, he’s got a mask. He could be speaking 200 feet away from them and he shows up with the biggest mask I’ve ever seen.”

Trump has held regular rallies around the country to drum up enthusiasm for his candidacy against the former vice president, who has eschewed campaign events with large numbers of people. Trump has taken pride in his big campaign rallies, with crowds of people who do not wear masks or maintain social distance.