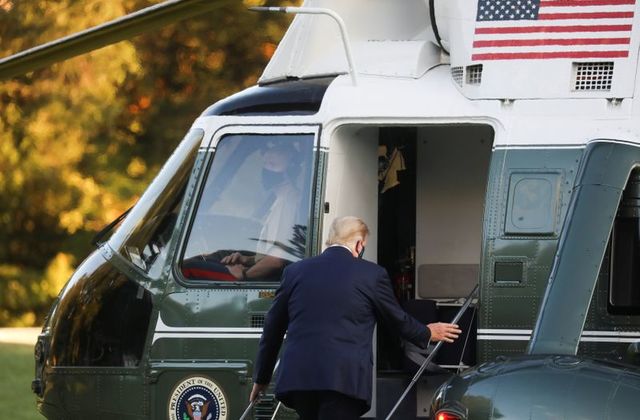 President Trump boards the Marine One helicopter to depart the White House and fly to Walter Reed National Military Medical Center, where it was announced he will stay for at least several days after testing positive for the coronavirus disease (COVID-19), on the South Lawn of the White House October 2. Photo: Leah Millis/Reuters

WASHINGTON, D.C. – White House officials sought to project an air of business as usual on Friday despite President Trump’s COVID-19 diagnosis, but aides privately expressed concern about the presidential election and showed signs of rising worry about the coronavirus.

“The business of government continues,” economic adviser Larry Kudlow told reporters after Trump disclosed on Twitter early in the day that he had tested positive for the coronavirus.

Trump flew by helicopter to Walter Reed Medical Center for treatment in the early evening. But staff members said he would continue working from a special suite there and that he had remained engaged in governing throughout the day. He did not transfer power to Vice President Mike Pence.

“We’re just trying to make sure that he takes it easy but he’s hard at work and will continue to,” White House press secretary Kayleigh McEnany said on Fox.

“His first question to me this morning was, ‘How is the economy doing, how are the stimulus talks going on Capitol Hill?,” Meadows told reporters outside the White House, adding he had spoken several times to Trump already.

Privately, some Trump advisers worried Trump’s illness could cost him the presidential election in just 31 days.

“Clearly it changes the dynamic from us being able to travel and show enormous energy and support from the rallies, which has been part of our calculation just like in 2016,” said one Trump adviser.

The president’s upcoming election events were postponed or moved online. Trump had been scheduled to hold a “Make America Great Again” rally in Florida on Friday night, two in Wisconsin on Saturday and another in Arizona on Monday.

On Friday, the sight of more White House staff than usual donning masks, including press secretary McEnany in the evening, was taken as a sign that coronavirus risks were being taken more seriously. Communications adviser Hope Hicks and first lady Melania Trump also tested positive.

Some in Washington speculated that Trump’s events on Saturday to announce Amy Coney Barrett’s nomination to the Supreme Court may have spread the virus.

Besides Trump and his wife, attendees Ronna McDaniel, the Republican National Committee chair, Mike Lee, a Republican senator, and the University of Notre Dame’s president, Rev. John Jenkins, have all tested positive for the coronavirus.

Deputy national security adviser Matt Pottinger, who oversees the National Security Council, was among the earliest and most consistent mask wearers in the White House. He was previously mocked behind his back by some staffers for wearing a mask at work, one person familiar with the matter said.

NSC staffers have been ordered to wear masks in all White House common areas and to avoid unnecessary visits to the West Wing, according to an internal email on Friday.

The White House is recommending masks and distancing, an official said Friday, but they are not mandatory.

During his gaggle with press on Friday, a maskless Kudlow was asked by a reporter why he wasn’t setting a good example for the public. Kudlow responded by donning a paper surgical mask. “All right, are we good?,” Kudlow said. “I’ve put my mask on.”