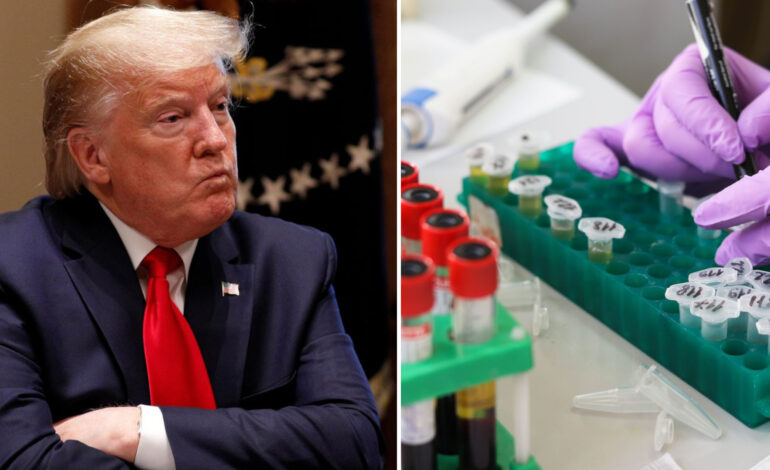 Trump touted the Lilly drug, along with the antibody treatment from Regeneron Pharmaceuticals Inc. that he received for his COVID-19, as tantamount to a cure in a video he posted last week

(REUTERS) — Eli Lilly and Co. said on Tuesday that the government-sponsored clinical trial of its COVID-19 antibody treatment similar to one taken by President Trump has been paused by the U.S. government because of a safety concern.

Trump touted the Lilly drug, along with the antibody treatment from Regeneron Pharmaceuticals Inc. that he received for his COVID-19, as tantamount to a cure in a video he posted last week.

The announcement comes one day after Johnson & Johnson said it was forced to pause a large high-profile trial of its experimental coronavirus vaccine because a volunteer fell ill. J&J said it does not yet know if that person was given the vaccine or a placebo.

AstraZeneca Plc’s U.S. trial for its experimental COVID-19 vaccine has also been on hold for more than a month after a volunteer in its U.K. study fell ill. Trials of that vaccine resumed in other regions after a brief halt.

Lilly said earlier this month it was applying for emergency use authorization (EUA) for the antibody drug, LY-CoV555, for patients with mild to moderate COVID-19 based on data from another clinical trial.

It is not uncommon to pause drug trials to investigate safety concerns, and such actions do not necessarily indicate a serious problem. Because of the urgent need for drugs and vaccines to tackle a pandemic that has claimed more than 1 million lives worldwide — and the speed with which they are being developed — these trials have come under intense scrutiny.

“Out of an abundance of caution, the ACTIV-3 independent data safety monitoring board (DSMB) has recommended a pause in enrollment,” Lilly spokeswoman Molly McCully said in an emailed statement. “Lilly is supportive of the decision by the independent DSMB to cautiously ensure the safety of the patients participating in this study.”

The Indianapolis-based drugmaker did not comment on the implications for the paused trial, called ACTIV-3, which is testing the treatment on COVID-19 patients who require hospitalization, or on its other ongoing trials. It is also testing the drug in nursing homes to see if it can prevent staff and residents from getting infected.

Lilly is conducting the trial in partnership with the National Institute of Allergy and Infectious Diseases (NIAID), a division of National Institutes of Health (NIH). NIAID said it paused the trial at the recommendation of the data and safety monitoring board.

The U.S. Food and Drug Administration did not immediately reply to requests for comment.

The ACTIV-3 trial began in August and is aiming to recruit 10,000 patients primarily in the United States.

Lilly sought the EUA from U.S. regulators after publishing data in September showing LY-CoV555 helped cut hospitalization and emergency room visits for COVID-19 patients. The treatment is being developed with Canadian biotech AbCellera.