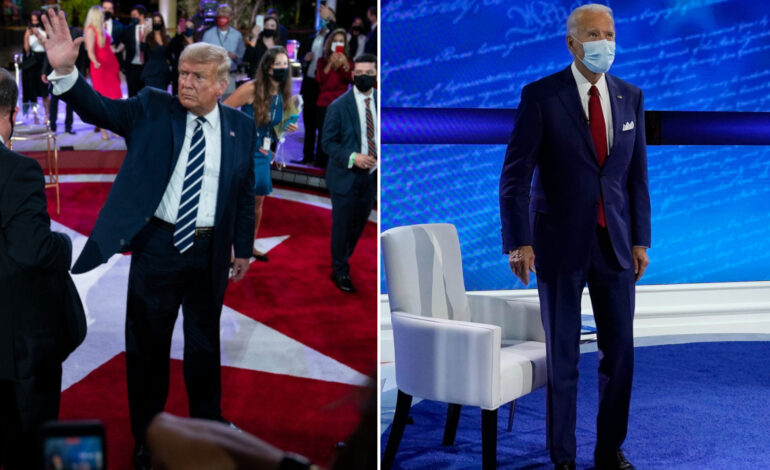 The two held live town halls simultaneously broadcast on different networks, instead of a second debate

MIAMI/PHILADELPHIA — On Thursday, Democratic presidential candidate Joe Biden criticized what he called President Trump’s “panicked” response to the coronavirus pandemic, while Trump defended his handling of a crisis that has killed more than 216,000 Americans.

The rivals spoke in simultaneous town halls broadcast on separate television networks after a debate originally scheduled for Thursday was called off following Trump’s COVID-19 diagnosis.

The split-screen showdown offered a stark reminder of the many ways the campaign season has been changed by a pandemic that has prompted more than 18 million people to cast ballots more than two weeks before Election Day on Nov. 3.

Biden, speaking to voters in Philadelphia on ABC, blamed the Republican president for concealing the deadliness of the virus.

“He said he didn’t tell anybody because he was afraid Americans would panic,” Biden said. “Americans don’t panic. He panicked.”

Trump defended both his response to the pandemic as well as his own personal conduct, including staging a Rose Garden event at the White House where few wore masks or practiced social distancing, which resulted in numerous attendees contracting the disease.

“Hey, I’m president — I have to see people, I can’t be in a basement,” Trump said on NBC in front of an outdoor audience of voters in Miami, implicitly criticizing Biden for spending months off the campaign trail as the pandemic raged.

He did not answer questions about the last time he tested negative before contracting the virus, saying he did not recall precisely.

He said he “heard different stories” about the efficacy of masks, even though his own administration’s public health experts have said wearing them is key to stopping the spread of the virus.

The president declined to denounce QAnon, the false conspiracy theory that Democrats are part of a global pedophile ring, first praising its adherents for opposing pedophilia before saying he knew nothing about the movement.

Trump also dodged questions about a New York Times investigation of two decades of his tax returns, which he has refused to release publicly despite decades of precedent for presidential candidates.

He appeared to confirm the paper’s report that he has some $400 million in personally guaranteed loans, arguing that the amount was a “peanut” compared with his worth. He also did not deny the Times’ report that he paid only $750 in federal income tax during his first year in the White House, although he said at one point the paper’s numbers were “wrong.”