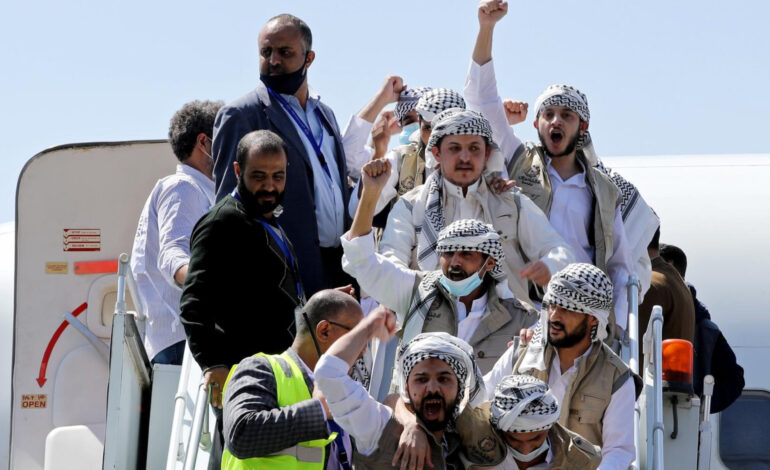 Freed Houthi prisoners arrive at Sanaa airport after their release in a prisoner swap on Oct. 15. Photo: Reuters

SANAA – On Thursday, planes carrying prisoners exchanged by the warring parties in Yemen took off from three airports in an operation to return about 1,000 men home and help build the trust to enable fresh talks to end a devastating war.

The Saudi-led military coalition and Yemen’s Houthi movement agreed last month in Switzerland to exchange 1,081 prisoners, including 15 Saudis, in the largest swap of its kind in the 5-year-old conflict.

In an operation managed by the International Committee of the Red Cross, three planes carrying members of the coalition freed from detention took off from the Houthi-held capital, Sanaa, a Reuters witness said.

“This operation that means so much to so many families is under way,” Fabrizio Carboni, ICRC regional director for the Middle East, told Reuters from Sanaa airport.

One of the planes was carrying Saudi and Sudanese detainees and flew to Saudi Arabia. The other two flew to Sayoun airport in the government-held Hadramout region.

Two planes carrying Houthis released by the coalition departed Sayoun, and a second arrived from Abha airport in Saudi Arabia, another Reuters witness and sources said.

ICRC spokeswoman Ruth Hetherington said more than 700 prisoners had been exchanged on Thursday on a total of seven flights from Sayoun, Sanaa and Abha. More flights are scheduled over the next two days, the aid agency said.

Under the deal, the Iran-aligned Houthi group is to release around 400 people while the coalition would free 681 Houthi fighters.

A coalition statement, which confirmed that the plane carrying 15 Saudis and four Sudanese had landed in Riyadh, stressed the “political and military leaderships’ keenness for the return of all POWs and detainees.”

The warring sides had agreed in 2018 to swap 15,000 detainees split between both sides to pave the way for political negotiations to end the conflict, but progress has been slow.

U.N. Yemen envoy Martin Griffiths told the Security Council the swap was an “airlift of hope”, adding that both parties remain in negotiations for a permanent ceasefire.

Elsewhere in Yemen, clashes erupted in the city of Taiz. One person was killed and 38 were wounded, Médecins Sans Frontières said.

Yemen has been at war since the Houthis ousted the internationally recognized government from power in Sanaa in late 2014, prompting the coalition to intervene in 2015.

As a result of war, cholera and now COVID-19, some 24 million Yemenis, 80 percent of the population, require aid, while 20 million lack sufficient food and access to clean water, Carboni said.

In lieu of a liberation strategy: Palestinian elections are designed to buy time

How do Democrats and Republicans differ on Palestine and Israel?