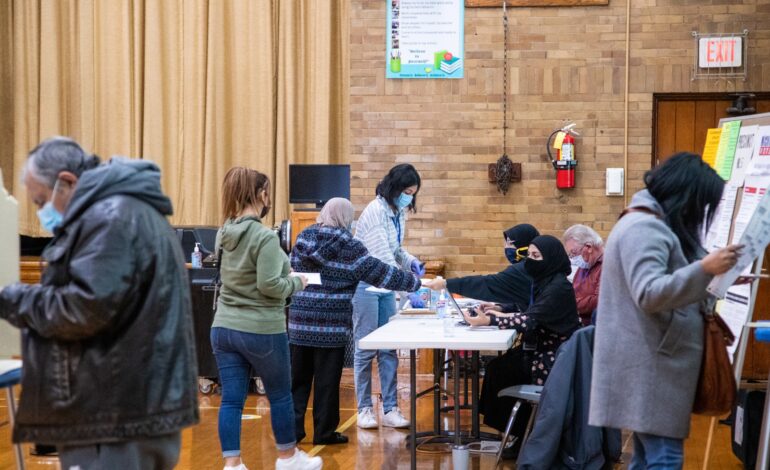 DEARBORN/DEARBORN HEIGHTS — First time and experienced voters are still flocking to the polls to vote in person amid the COVID-19 pandemic.

“I just turned 18, so this is my first election and my first presidential election,” she said. “I know who I’m voting for and I hope that I will be able to vote in every election going forward. Every vote does count.”

A resident of Dearborn for 45 years, Ali Khalil said he has never missed an election.

“It’s every citizen’s duty,” he said. “It’s our right and our duty to this great country to vote.”

Hailey Spurgis, an election official for Precinct 12 in Dearborn Heights, said these are lower numbers than she’s seen before for a general election.

“I’ve been doing this since I was 17 because my mom made me do it and I just like helping people,” she said. “We have had 453 voters come through so far, but for a presidential election that’s really low. We had over 700 when marijuana was on the ballot and that’s the highest I’ve ever seen.”

Brianna Neace of Dearborn Heights has never missed voting in an election and has lived in the district for seven years.

“It’s important to have our voices heard and that our votes are counted,” she said. “We need to take an active part in deciding our government.”

Above: Photos from various precincts in Dearborn, Tuesday, Nov. 3

Mark Tackett, a resident of the D7 District of Dearborn Heights for more than 25 years, said he has voted in every election he’s been able to.

“I like to complain and if I don’t vote, I can’t complain about who wins or loses,” he said. “Voting is a way of having a say in our government and we should get out and have our say as we still live in a country where we can.”

While both communities reported no violence or issues at the polls, Officer Robbie Hammoud with the Wayne County Sheriff’s Department said that he and his team were going back and forth among five different communities to ensure safety among voters.

“We have had no issues in any community we have been monitoring,” he said. “We were instructed by the attorney general to make sure no guns went inside to polling locations and that no one is turned away. If they were in line before 8 p.m. they are voting.”