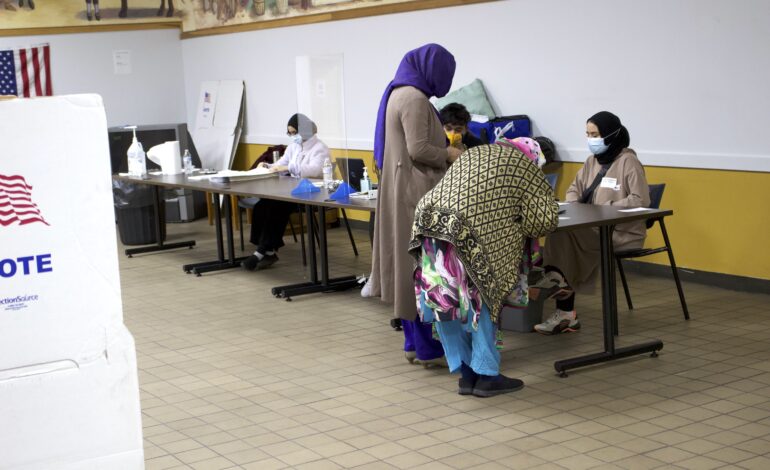 Voters at a precinct in the south end of Hamtramck, Nov. 3. All photos: Hassan Abbas/The Arab American News

HAMTRAMCK — Precincts in Hamtramck showed a steady turn out by late afternoon, though the Election Day turn out seemed to be lower than expected for a major election.

Hamtramck City Clerk August Gitschlag told The Arab American News that only 5,183 absentee ballots had been returned as of 3:30 p.m. Just under 700 AV were still out among residents, but many were spoiled at the polls. Hamtramck has 13,813 registered voters.

One election official at a voting location in a senior center, which houses two precincts, said she had not seen major traffic, a testament to the heavy early voting turnout that has been a hallmark of this election nationwide.

Turn out was expected to increase in the last few hours before polls close at 8 p.m. Precincts reported an average of 200 votes by mid afternoon. A location in the densely populated Woodbridge neighborhood of Detroit by comparison reported double digit numbers by early afternoon.

Hamtramck precincts had police presence and monitors from the U.S. Justice Department, following anxiety over voter intimidation and possible violence at the polls. None of that has been reported in the city, which is home to a large Yemeni and Bengali population.

Two ballot proposals could mean a drastic change in how police and fire services are provided to Hamtramck residents. Proposals 1 and 2 seek to remove language from the Hamtramck City Charter that establishes a fire and police department and their respective chiefs.

If those proposals pass, the City Council will come up with an alternative method to provide those services, possibly by outsourcing them from Detroit, or consolidating the departments and cross training officers and fire fighters to perform both duties. A majority of the City Council approved the ballot measure, though they have not said what this alternative would actually entail.

We do not have to change the language in the charter to make services better. The only reason to do that is to diminish those services, or to allow for that — Hamtramck fire fighter

Those City Council members who support the elimination of fire and police departments language from the charter say it will save the cash-strapped city from its budget woes.

Not surprisingly, members of the Hamtramck Fire Department were out campaigning against the proposals in front of polling locations on Tuesday.

“(These proposals) can affect people’s actual safety,” a fire fighter told The Arab American News. “We do not have to change the language in the charter to make services better. The only reason to do that is to diminish those services, or to allow for that.”

There is much opposition to the proposals but also a lot of support, with much of the debate occurring over Hamtramck’s social media pages. It is hard to determine where a majority of voters will land on Tuesday.

Officials in Hamtramck are anticipating days of counting due to the unprecedented overall turnout. Michigan Secretary of State Jocelyn Benson has said final results may not be available till at least Friday. President Trump has promised to take legal action if counting continues into the week.

Hamtramck Mayor Karen Majewski will speak at a rally on Thursday to highlight the need for a full count.

“This year, Election Day will be more like Election Week,” said a press release for the event. “An unprecedented number of absentee ballots were requested and turned in, and these ballots will take a while to count. While it takes patience, we encourage the public to remain both active and faithful in the counting process.”

Organizers are encouraging community members to gather with and thank local election officials and to show their support until the very end.

The Hamtramck Review first reported on Tuesday that Hamtramck City Councilman Mohammed Hassan has received a cease and desist order from the Michigan Attorney General’s office for alleged attempts to recruit volunteers over social media to help voters with their absentee ballots, and to also provide transportation for voters to turn their ballot into the clerk’s office.

Hassan has denied the allegations.

An earlier version of this story said Hamtramck had over 9000 registered voters. The actual count is 13,813. That number has been added to this latest version.