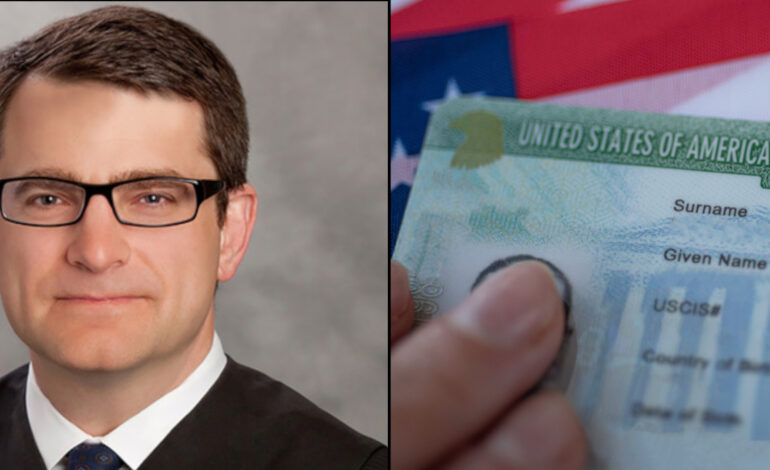 WASHINGTON, D.C. — A U.S. District Judge in Chicago rejected a rule on Monday that was implemented by the Trump administration and aimed at denying Green Cards to immigrants utilizing food stamps and other public benefits.

The rule was rejected by Judge Gary Feinerman.

The Illinois Coalition of Immigrant and Refugee Rights, as well as Cook County, filed suits in Sept. 2019 in hopes of blocking the rule that was placed into effect in January by the U.S. Supreme Court.

Feinerman said that the rule violates the Administrative Procedure Act, which governs the process federal agencies use to develop and issue regulations.

The policy was intended to deny an immigrant’s Green Card application if they were found to be accessing programs such as food stamps, healthcare and housing benefits. Those applicants would have been considered a public charge under the new policy.

The ICIRR and Cook County argued that the term public charge, which implies an individual has been deemed a burden or dependent on the country, is ambiguous and requires a “degree of dependence” beyond temporary assistance.

Trump’s administration claimed that the policy would filter out applicants unable to remain self-sufficient while in the U.S, but immigrant rights advocates believe the rule forced individuals to choose between their health or an opportunity to stay in the country.

“As we all continue to be impacted by COVID-19, it is vital that no one is fearful of accessing health care,” Cook County Board President Toni Preckwinkle said in a statement. “The court’s decision to block enforcement of the Public Charge Rule re-opens doors for immigrants to access vital services like health care.”

Fred Tsao, senior policy counsel for the ICIRR, called the rule an “attack” on legal immigration and criticized the way the Trump administration has instituted policies.

“We may or may not get a new administration,” he said. “If we do, we’d like to see a lot of this damage undone and hopefully some legislative changes that will actually benefit immigrants instead of scaring them away.”