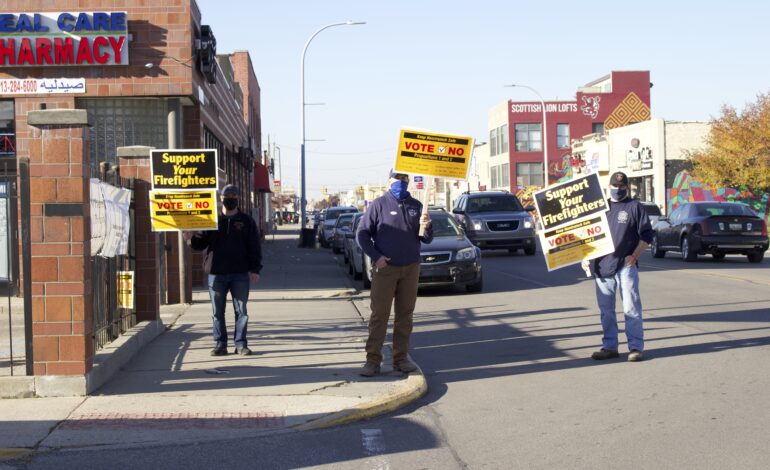 Fire fighters outside of a precinct in Hamtramck ask voters to say no to Proposals 1 and 2. Both were rejected by residents in Tuesday's general election. All photos: Hassan Abbas/The Arab American News

HAMTRAMCK — A majority of Hamtramck voters said no to two proposals that would eliminate City Charter language that establishes and guarantees a fire and police department, and their chiefs.

Proposals 1 and 2 had been hotly contested, dividing much of the city between those who see the departments as having an undue strain on the city’s budget and others who see them as absolutely necessary for the safety of residents. The rivalry played out in a sometimes bitter prolonged dispute over social media that opened old wounds among Hamtramck’s various political factions.

Both proposals were rejected by more than 3,600 voters, while some 2,500 voted yes on Election Day. More than 7,800 out of more than 13,700 registered voters participated in Tuesday’s election in Hamtramck, with more than 5,300 of them voting absentee.

A majority of Hamtramck’s City Council, which has four Muslim-identifying Council members, had voted earlier in the year to put the proposals on the November ballot. Against this effort were Council members Ian Perrotta and Andrea Karpinski, who joined fire fighters in Hamtramck to call the effort dangerous and irresponsible.

Though many of the opponents of the proposals were White, the results in the heavily Bengali and Yemeni-populated city shows they weren’t alone.

“We are so happy for the results,” the Hamtramck Firefighters Association said in a Facebook post following election results. “We have a long road ahead of us and wish to work with the community to continue providing the highest level of services possible.” Both proposals were rejected by more than 3,600 voters, while some 2,500 voted yes on Election Day. More than 7,800 out of more than 13,700 registered voters participated in Tuesday’s election in Hamtramck, with more than 5,300 of them voting absentee

If those proposals had passed, the City Council would have come up with an alternative method to provide fire and police services, though they have never explained what this alternative would actually entail. Two possibilities were outsourcing those services from neighboring Detroit or consolidating the departments and cross training officers and fire fighters to perform both duties.

“(These proposals) can affect people’s actual safety,” a fire fighter out campaigning on Election Day told The Arab American News. “We do not have to change the language in the charter to make services better. The only reason to do that is to diminish those services, or to allow for that.”

Hamtramck City Councilman Mohammed Hassan, who had led the charge for the proposal, received a cease and desist order from the Michigan Attorney General’s Office for alleged attempts to recruit volunteers over social media to help voters with their absentee ballots, and to also provide transportation for voters to turn their ballot into the clerk’s office. Hassan denied the allegations.

Despite the heavy absentee turnout and talks of a prolonged vote count, Hamtramck election officials got through the count before midnight, with many residents waking up to results the next morning. The Hamtramck Review reported on Thursday that more than 6,000 votes went to Joe Biden.

Hamtramck voters also overwhelmingly rejected an increase of 10 mills on their property taxes to pay for police and fire fighter retirements. That effort to defeat that proposal began earlier in the year and was coupled with an August proposal for a 7 mill bond to pay for a new elementary school building in the city, which voters also rejected.

The failure of Props 1 and 2 in Hamtramck may ring a positive note for fire fighters and for residents’ safety, but the city still needs to save money and is currently in deficit spending. Without a remedy, Hamtramck could be looking down the barrel of another receivership.