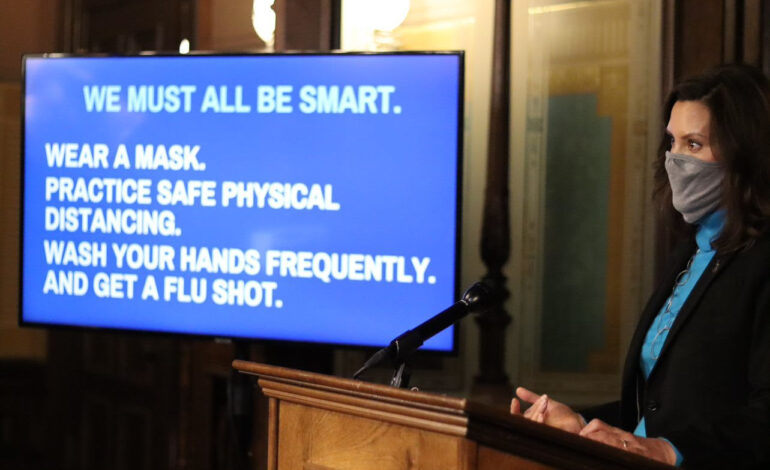 “We are in the worst part of this pandemic to date,” she said. “This is the moment medical experts have been warning about and dreading since the beginning of the pandemic.”

The press conference came just hours after hospital leaders across the state announced that their hospitalizations are doubling every two weeks due to the number of cases.

Ed Ness, president and CEO of Munson Healthcare in Northern Michigan, said it’s a different situation for smaller hospitals, as their hospitalizations have nearly quadrupled in the last month.

“It doesn’t matter where you live,” he said. “Even in our rural communities, you have to be diligent. … In smaller hospitals, they are the only hospital in a community. There isn’t a safety valve.”

With the state having reported 6,940 new cases Thursday with 45 additional deaths, the seven-day average positivity rate is at 10.2 percent.

While hospital leaders said it is not necessary for the state’s government to impose a stay-at-home order again, they did advise that some targeted restrictions may be needed as they want to avoid prohibiting elective or non-emergency procedures.

Unlike the spring, hospital leaders have contingency plans in place and confirmed that they do have adequate personal protective equipment. They also said their concern is not about bed capacity, but the health of their staffs.

So far, Beaumont and Henry Ford Health have both altered visitation policies for some of their hospitals.

Attending small gatherings, not quarantining after exposure, getting tested too soon after exposure, assuming that because something is allowed that it’s safe, assuming taking one precaution will keep you safe and assuming friends and family are as careful as you are were among the mistakes Whitmer pointed out.

“We love our friends and family and want to stay connected, but you can’t assume everyone is following the same approach that you are,” Whitmer said. “We’ve got to take all of these precautions. Physical distancing without hand washing — that’s a recipe for disaster. We have to do all of these things, not one of them. If you are not quarantining for two weeks when you’ve been exposed, you could be presenting a danger to others.”