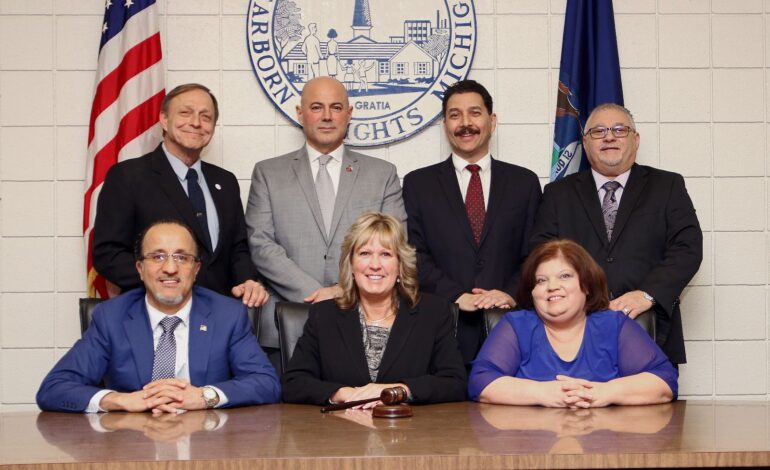 The City Council voted to pass a resolution to allow the city treasurer to establish separate bank accounts for restricted and corporate funds.

DEARBORN HEIGHTS — The City Council voted to pass a resolution to allow the city treasurer to establish separate bank accounts for restricted and corporate funds.

The resolution was put forward by Councilwoman Lisa Hicks-Clayton, who was just elected city treasurer during the Nov. 3 election and comes after Mayor Daniel Paletko requested an audit into the treasurer’s office for the last four months, due to bank accounts being created and money being moved around.

The resolution was to allow the treasurer to create a separate bank account for the CSO bond funds and city restricted funds.

“Be it further resolved that the City Council direct the city treasurer to establish separate bank accounts for the various city restricted funds as reported in the annual third party audit report under ‘Government Funds Balance Sheet,’” the resolution said. “The city restricted revenues are collected for special purposes and must be kept separate from the unrestricted general city operational funds for transparency and avoiding using them for other than their purpose.”

Former Treasurer John Riley requested that the Council really think the resolution through.

“Please do not take the adoption of this resolution lightly,” he said. “The most concerning part of the resolution is the part regarding the deposit of the $2 million into the 115 trust. As you know, the general fund is required to make approximately a deposit of $500,000 a year into the 115 trust. If I were a Council person, I’d want to know is this a deposit of the next four years or are we depositing the $2 million now, plus $500,000.”

Riley also said the moving of the funds means that the City Council now will have no control over that money.

“Once this money gets into the 115 trust, it becomes irrevocable,” he said. “The City Council will no longer have control over those funds. And it limits the city’s cash flow. I think the City Council should have more discussion.”

Current Treasurer Zouher Abdel-Hak said that he thinks the Council should pass the resolution.

“There are lots of funds; according to the charter they should be in specific accounts, and for a long time those funds are in the general fund pools or the checking account,” he said. “I think we should give the new treasurer the flexibility to decide if she wants to keep those funds in the general fund or keep them to the side as per the charter. I think the Council should approve this and give Lisa Hicks-Clayton the opportunity to decide what’s best for the city according to the charter.”

This resolution was in addition to what Paletko put forward requesting a forensic audit into the treasurer’s office over the last four months.

“As treasurer-elect, I totally support an audit,” Hicks-Clayton said. “I think this letter dated with a four month period is what concerns me and I’d like to refer this back to administration.”

Councilman Dave Abdallah said that he had a problem with the resolution.

“If the administration has a concern with the current way that the treasurer is handling things, I think we need to go to Plante Moran,” he said. “I don’t think we should make a mountain out of ant hill. I am against the forensic audit off the bat.”

Paletko said that he had submitted the concerns because they had already been brought forward on the audit.

“I am very impressed with the employees of the treasurer’s office,” he said. “But back in August a new account was created and on Oct. 30, over $900,000 was moved to that account just days before the election.”

Councilman Ray Muscat said that he wants a longer time frame on an audit.

“I think it’s prudent we send it back because I don’t like the amount of time that’s been put on there,” he said. “There’s a lot of audits that’s going to be going on. Ten years is what I want to see, not just four months, because I know there have been things purchased before without Council approval and then come back to tell us to approve it later. We’ve done that in the past and this to me is like a witch hunt also.”

Abdel-Hak said that what was put forward by Paletko were just “false allegations.”

Abdel-Hak also claimed that there are no delays from his office and posted photos of the treasurer’s office on social media to show why the office equipment was purchased without approval.

“I spent about $5,000 on equipment,” he said. “This is a normal procedure. There have been so many times where the mayor himself and his directors have gone and purchased things before bringing them to the Council. I asked for an audit for 10 years to show you how corrupt this mayor is.”

Paletko told The Arab American News said that while the agenda item was referred back to him in a 6-1 vote, he is optimistic.

“It’s important for the residents to see that this is happening,” he said. “Treasurer Abdel-Hak never defined why he moved the money right before the election or why he didn’t follow the procedures. This will hurt the city, but I am optimistic and have already reached out to Hicks-Clayton for a meeting.”

With the Council voting to adopt the resolution put forward by Hicks-Clayton, she said in a social media post that the resolution is an important step to take for following the charter.

“Restricted funds, including ACT 345 and PEG, are restricted and may only be used for the purpose designated by law,” her post said. “Per city charter, the treasurer shall keep separate accounts for such funds. Currently, restricted funds are within the general fund savings account. These monies have been used, or so acknowledged, to cover cash shortages, without the City Council’s knowledge or approval.”

The resolution passed with a 5-2 vote, with Abdallah and Councilman Bob Constan voting no.