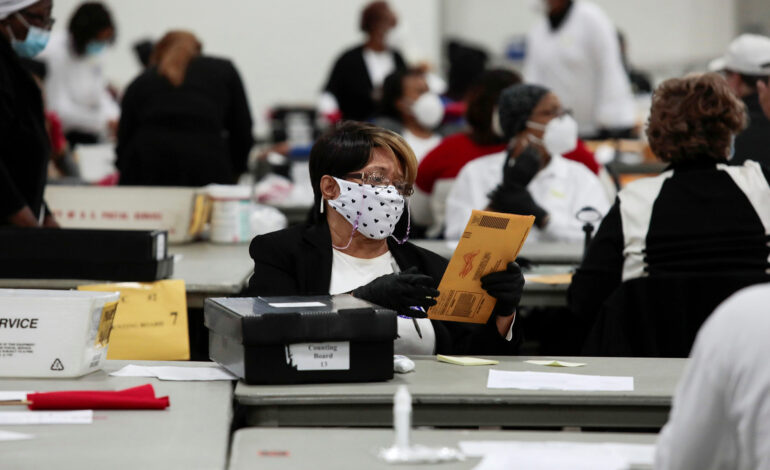 LANSING — Another legal challenge to Michigan elections this week meant Secretary of State Jocelyn Benson was forced to hand over 1,100 pages of election-related documents due to a wide-ranging legislative subpoena.

The subpoena was issued by the Senate and House Oversight committees, as part of an ongoing challenge by the Trump administration and loyalists who have sought to delay or overturn voting results in key Democratic counties, without any discovery or evidence of wide-spread voter fraud.

The subpoena was issued on Nov. 7 and asked the state’s Bureau of Elections to produce documents focused on events leading up to the Nov. 3 general election. The subpoena asks for “all documents and communications” relating to the Bureau’s efforts to inform residents of their right to vote by mail and how they could register to vote. The committees demanded that the documents be provided in only nine calendar days, which is six business days form the receipt of the subpoena.

Attorney General Dana Nessel responded to the subpoena and its demands in a letter this week. She called the short deadline for submission, “unduly burdensome, especially considering the important duties the Bureau is currently performing to ensure that Michigan’s election results are timely and properly certified under state law.”

The Bureau is expected to keep providing documents per the subpoena after the 1,100 pages already submitted, in an effort towards transparency, even though it has several legal objections to the subpoena.

Nessel’s office said a legislative subpoena is only valid if it serves a legislative purpose. The committees failed to clearly describe that purpose in the subpoena, though legislators have stated in a separate letter to Director of Elections Jonathan Brater that their inquiry is in response to “numerous allegations regarding the integrity of the November 3 election.”

However, attempting to challenge or invalidate the results of an election cannot be considered a proper legislative purpose of any committee of the House or Senate, the AG’s office notes, as the Legislature plays no role in the actual administration of an election or the recount and challenge procedures that may apply.

“Michigan’s elections have been fair and transparent,” Nessel said. “It is time to set the politics aside and focus on moving our state and country forward together. We hope the Bureau’s response to the Legislature’s subpoena today will help do that.”

Benson said she hopes legislators will stop their “meritless attempt to falsely denigrate our elections simply because they are disappointed by the results, and instead join my office and many local clerks in assuring the public that in this election, every valid vote was counted and every voice was heard.”

5.5 million voters participated in the Nov. 3 general election in the state, more than ever before in Michigan history, with Joe Biden defeating incumbent President Trump by about 150,000 votes. Those results have been challenged by the Trump campaign since shortly after the election.

Boards of canvassers all over the state have or will certify results of the elections in their counties this week. Forty-nine counties in the state have already certified their results and Wayne County is on track to certify at 3 p.m. Tuesday.

The Trump campaign and its backers have filed numerous lawsuits in the state and federal courts, specifically targeting Democrat-leaning counties like Wayne and Washtenaw. Three have have been rejected by judges, another one brought by independent entities was taken back by the filers. Like Michigan, the campaign’s largely unsuccessful legal efforts in other states have produced no hard evidence and has lacked coordination and clear purpose, often stabbing in the dark at various aspects of the heavily monitored election.