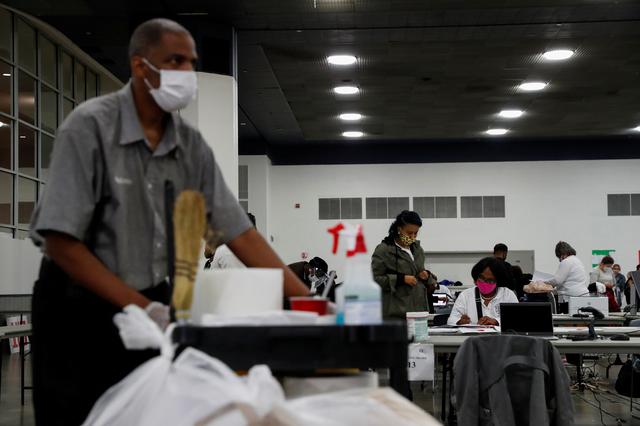 Election workers at the TCF Center in Detroit. Photo: Reuters

WAYNE COUNTY — A source at the Michigan Secretary of State has informed The Arab American News that Wayne County has now certified its elections results, after two Republicans on the county’s Board of Canvassers changed their earlier decision not to do so.

Earlier Tuesday evening, the Wayne County Board of Canvassers was not able to certify results of the Nov. 3 election. The board was deadlocked on a 2-2 decision between two Democrats and two Republican canvassers, with Republicans voting not to certify the ballots.

Reports say several Detroit precincts are slightly out of balance, meaning votes are not in line with the number of voters. This is a small discrepancy and not evidence of fraud.

The deadlock meant a possible delay in certification of statewide election results. According to Michigan law, when a county board fails to certify election results, the Board of State Canvassers takes over, which then has 10 days to canvass and certify the results.

Monica Palmer, the Republican chair of the Wayne County Board of Canvassers, said earlier she would be open to certifying much of Wayne County, but not Detroit. However, Palmer said she would certify results in Livonia, which is primarily White, and was mentioned by staff as having the second highest number of out-of-balance precincts.

The board of canvassers oversees election process and then certifies the results by signing off on the canvassing process and announcing the final vote totals in the county. For decades, boards have certified election results that included unbalanced precincts. Unbalanced precincts do not mean an inaccurate count, and instead typically means human error in the paperwork, according to Progress Michigan.

While the board was in deadlock, Governor Whitmer said she was confident that  the state board would step in and move results forward to be certified statewide.

Secretary of State Jocelyn Benson said the state’s Bureau of Elections, “stands ready to fulfill its duty to complete the canvas for Wayne County, address any clerical errors and improve the quality of the canvass overall. Importantly, this is not an indication that any votes were improperly cast or tabulated.”

My statement on the actions taken during today’s meeting of the Board of Wayne County Canvassers. pic.twitter.com/Vb2TRpiLdJ

The county board met on Tuesday after the Michigan Court of Appeals rejected a lawsuit, filed by a group of Republican election challengers, to delay the certification. The lawsuit had alleged fraud in the count at the TCF Center in downtown Detroit. The lawsuit was originally denied by a Wayne County judge who called it “incorrect and not credible.”

The meeting lasted five hours and saw outrage and accusations of racism against Black voters in Detroit from the public.

“The Republican members of the Wayne County Board of Canvassers refusal to certify the November general election results is nothing but a racist and partisan attempt to disenfranchise voters,” Tlaib said. “It’s plain and simple — the Republican members abdicated their role and put politics above their duty to our residents. Suggesting that all of Wayne County can be certified, EXCEPT for Detroit, is horrifyingly racist and a subversion of our democracy.

“Members Monica Palmer and William Hartmann will live in infamy for their flagrant racism and disregard for democracy. Their decision will delay the voices of Wayne County residents from being heard and cost Wayne County taxpayers more money, and will only fuel the baseless attempts to sow doubt about the results of the election. This is a shameful day for our county and state.”