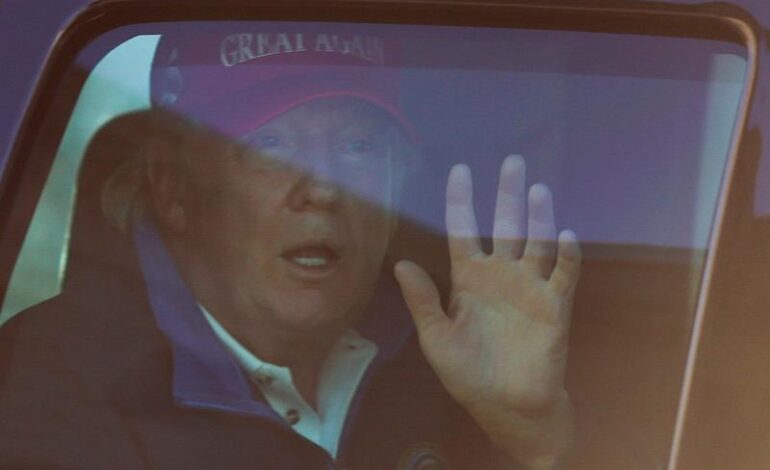 The president invited GOP leaders from Michigan to speak to him at the White House on Friday, as the state prepares to certify its results. Photo: Reuters

Though the contents of what will be discussed at the meeting were not announced, it is clear that certification of statewide votes in a state where Joe Biden holds a 154,000 vote victory is likely the issue at hand.

On Tuesday, the Wayne County Board of Canvassers met to certify the county’s election results. After initially voting “no”, the two Republican members of the board, Monica Palmer and William Hartmann, then agreed to certify the results after an hours-long meeting, which saw outcries of disenfranchisement from the public.

Biden overwhelmingly won Wayne County. The Trump campaign took back its lawsuit in the state on Thursday and has yet to provide evidence of voter fraud in any state.

But Trump called both Palmer and Hartmann after the certification. Then on Wednesday, they signed affidavits saying they wanted to “rescind” their votes. Palmer told The Washington Post that she was not pressured by Trump during their phone call, and instead accused Democrats of not making good on an audit of Detroit precincts that she had demanded.

The Michigan Secretary of State’s Office has said that once certified, the members simply cannot rescind their votes. The results now go to another four-member state canvassing board, which is expected to meet Monday and also is split with two Democrats and two Republicans.

If those electors fail to certify state-wide results, they will be order to do so by a state court. Governor Whitmer also has authority over the board. There is fear that GOP-controlled Michigan legislature could attempt to change the slate of electors in favor of Trump and against the popular vote, which is where Shirkey and Chatfield come in. But both leaders have said they will not overturn Biden’s victory in Michigan.

Further, a spokesperson for Shirkey said last week that “Michigan law does not include a provision for the legislature to directly select electors or to award electors to anyone other than the person who received the most votes.” Experts also say the legislature has no authority to unilaterally change the Michigan elector selection process.

“Instead of focusing on defeating this virus, Speaker Chatfield and Leader Shirkey have been summoned to the White House in a last-minute attempt to overturn the results of the election. The votes have been counted, Michiganders have spoken and they chose Joe Biden to be our next president. The continued attempts to disenfranchise voters, particularly people of color, are shocking and unacceptable. History will judge Speaker Chatfield and Leader Shirkey on whether they choose to acknowledge the results of the election and defend our democracy, or simply be loyal to one man.”

All eyes on Wayne County

Detroit was found to have unbalanced results at some of its precincts, which can happen from simple human error. Before agreeing to certify Detroit, Palmer had said she would certify results in Livonia, which is primarily White, and was mentioned by election staff as having the second highest number of out-of-balance precincts.

For decades, boards have certified election results that included unbalanced precincts. Unbalanced precincts do not mean an inaccurate count and instead typically means human error in the paperwork, according to Progress Michigan.

This caused many, including state officials, to speak out against the Republican members’ illogical and problematic earlier refusal to certify.

“Members Monica Palmer and William Hartmann will live in infamy for their flagrant racism and disregard for democracy,” Tlaib said. “Their decision will delay the voices of Wayne County residents from being heard and cost Wayne County taxpayers more money, and will only fuel the baseless attempts to sow doubt about the results of the election. This is a shameful day for our county and state.”

The fallout from Tuesday’s meeting put Wayne County in the nation’s headlines for days. Included in the frenzy was a prominent member of the Arab American community in Michigan.

Abraham Aiyash, who ran unopposed for sate representative of District Four, which includes Detroit and Hamtramck, spoke out on Tuesday’s meeting about Palmer’s apparent racism.

He accused Palmer of perpetuating the history of racism in Grosse Pointe Woods, a city Palmer is very publicly associated with, and asked “what that means for your kids, who probably go to Grosse Pointe North, and when they see all their Black classmates and they know that their mother, or their grandmother, their aunt, decided to say, in this democracy in this American project, that is not perfect but we have to work toward perfecting it, I’m going to be comfortable sleeping at night knowing that I silenced the votes of so many people.”

After Aiyash’s comments were taken out of context in a short clip circulated on social media, some accused him of putting Palmer’s family’s safety at risk during a highly tense and vicious Tuesday evening meeting.

Palmer and Hartmann’s personal details were circulated by some Twitter users in an apparent effort to hold the two responsible for initially failing to certify the results in Wayne County. Such practice is referred to as “doxxing.” Aiyash was not involved in this effort.

Aiyash did not intend harm towards Palmer in his comments on Tuesday, as he later told The Detroit Free Press that he didn’t even know Palmer had children and was trying to appeal to her moral compass. Aiyash has received racist messages and serious threats against his life since Tuesday.

While we’re outraged over “safety of children” – remember the following kids:

-those at the border locked in cages

-those from working poor families w/ no stable housing

Meanwhile on the national front, in a press conference put on by Trump’s legal team, a sweaty, unhinged Rudy Giuliani spoke of binders of evidence and insane conspiracy theories involving Venezuela, and yelled at the press at-large for failing to legitimize Trump’s flimsy legal case against election results in precincts won by Biden. Sidney Powell, an attorney for the Trump campaign, spoke of an elaborate scheme under which an “algorithm” manipulated by Democrats switched votes from Trump to Biden, which broke down only because support was so strong for Trump that Democrats were forced to use a “back door” method to manipulate the vote with mail-in ballots slipped in during the dark of night.

The lawyers spoke of affidavits presenting eye-witness testimony of voter fraud submitted in court in cases, a majority of which of have already been thrown out by judges precisely because those testimonies have not been credible.

Fact checkers had a field day with the Giuliani and co.’s claims. For example,  judges in Pennsylvania and Michigan have rejected claims of Republican inspectors being pushed out of the counting process. Trump’s own attorneys have attested in court that his campaign was granted access and observed the process, both in Philadelphia and in other cities, and has found no evidence of fraud.

Giuliani even said the Trump campaign withdrew its lawsuit from Michigan because the Wayne County board “decertified” results there, which is obviously a false statement.

Other allegations included vote counting in Germany and Spain and vote machines owned by Venezuelan communists, all conspiracy claims that have largely been debunked by U.S. officials.

Chris Krebs, who headed the Cybersecurity and Infrastructure Security Agency before being fired this week by Trump, tweeted that the “news conference was the most dangerous 1hr 45 minutes of television in American history. And possibly the craziest. If you don’t know what I’m talking about, you’re lucky.”