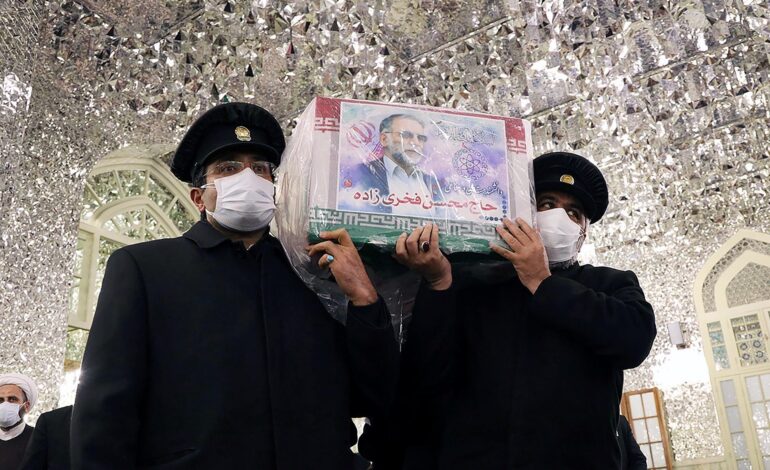 TEHRAN — Iran is unlikely to retaliate over the assassination of a prominent nuclear scientist before the inauguration of Joe Biden in case it jeopardizes any future sanctions relief, the top U.S. envoy on Iran told Reuters on Thursday.

Mohsen Fakhrizadeh, who had little public profile in Iran, but had been named by Israel as a prime player in what it says is Iran’s nuclear weapons quest, was killed last Friday when he was ambushed on a highway near Tehran and his car sprayed with bullets.

Elliott Abrams, Washington’s special representative on Iran and Venezuela, said in an interview that Tehran was “desperately” in need of sanctions relief from the U.S. and that would be a key calculation in their decision-making as President-elect Biden takes over from President Trump on Jan. 20.

“If they want sanctions relief, they know that they’re going to need to enter some kind of negotiation after January 20, and it’s got to be in their minds that they don’t want to… undertake any activities between now and Jan 20 that make sanctions relief harder to get,” he said. Members of Iranian forces pray around the coffin of slain nuclear scientist Mohsen Fakhrizadeh during the burial ceremony at Imamzadeh Saleh shrine in northern Tehran, on November 30. Photo: AFP

Iran’s clerical and military rulers have blamed Israel for Fakhrizadeh’s killing, which has raised the prospect of a new standoff between Tehran and its longtime enemy. Prime Minister Benjamin Netanyahu’s office has declined to comment on the killing.

Tensions between Washington and Tehran have risen since 2018, when Trump abandoned President Obama’s 2015 nuclear deal, and restored harsh economic sanctions to pressure Tehran to negotiate stricter curbs on its nuclear program, ballistic missile development and support for regional proxy forces.

In retaliation, Tehran gradually breached the deal’s restrictions on its nuclear program. Biden has said he will return the U.S. to the deal if Iran resumes compliance.

Last week, Abrams said the Trump administration was planning to tighten sanctions on Tehran during its final weeks in power but also urged Biden to press for a deal that reduces the regional and nuclear threats posed by the Islamic Republic.

He added that he expected a negotiation to take place with Iran next year and that he believes a deal will be struck under the Biden administration.

Iran’s clerical rulers have ruled out negotiations over its missile program or changing its regional policy. Instead it wants a change in U.S. policy, including the lifting of sanctions.