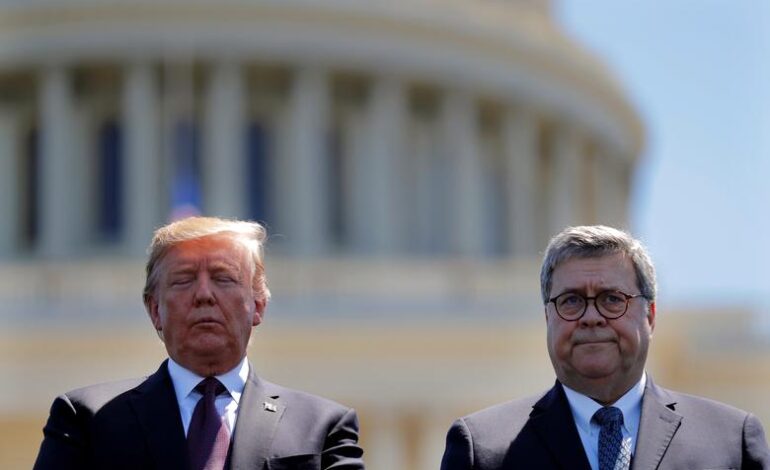 Outgoing President Trump said he is disappointed Attorney General William Barr and the DOJ didn't "look very hard" into what he claims is widespread voter fraud that cost him the election. Photo: Carlos Barria

WASHINGTON, D.C. — A key, longtime ally of outgoing President Trump dropped a bombshell this week, in yet another setback for Trump to convince courts and a majority of the American public that the Nov. 3 elections were rigged against him.

U.S. Attorney General William Barr told the Associated Press on Tuesday that the Department of Justice (DOJ) had not uncovered, to date, any evidence of widespread voter fraud that would change the results of the election.

Barr also touched on a commonly touted allegation against rigged voting machines owned by Dominion. A Dominion contractor did sign an affidavit claiming fraud in Michigan, though her allegations were of wrongful counting at Detroit’s TCF center by election workers. That affidavit was tossed out by a Wayne County court for not being credible.

“There’s been one assertion that would be systemic fraud and that would be the claim that machines were programmed essentially to skew the election results,” Barr said. “And the DHS and DOJ have looked into that, and so far, we haven’t seen anything to substantiate that.”

Trump’s campaign, his top lawyer, Rudy Giuliani, and senior adviser Jenna Ellis immediately dismissed Barr’s comments, saying his “opinion appears to be without any knowledge or investigation of the substantial irregularities and evidence of systemic fraud.”

“With all due respect to the attorney general, there hasn’t been any semblance of a Department of Justice investigation,” Trump’s team added.

Barr told the AP that DOJ investigations have looked at isolated claims of fraud that do not tie together to unveil a broader systematic breakdown in election integrity.

“Most claims of fraud are very particularized to a particular set of circumstances or actors or conduct,” Barr said. “They are not systemic allegations. And those have been run down; they are being run down… some have been broad and potentially cover a few thousand votes. They have been followed up on.”

He hasn’t done anything, he hasn’t looked… They haven’t looked very hard, which is a disappointment, to be honest with you.” — President Trump on AG Barr

Sources told the Washington Post that Trump privately expressed anger towards Barr following his comments and even floated the possibility of firing him, according to the Post. Barr arrived at the White House for a pre-planned with Chief of Staff Mark Meadows shortly after the interview. Sources told ABC News that Trump asked to see Barr while he was at the White House and that the two had an intense interaction.

After Tuesday’s interview, a spokesperson for the DOJ said that the office had not concluded its investigation into voter fraud and that Barr’s remarks were not an “affirmative finding of no fraud in the election.”

“The Department will continue to receive and vigorously pursue all specific and credible allegations of fraud as expeditiously as possible,” the spokesperson said.

Ironically, in the days after President-elect Biden became the likely winner of the November election, Barr had pleased Trump when he issued a memo authorizing DOJ investigators should pursue allegations of vote irregularities.

On Thursday, at an event where Trump presented former Notre Dame football head coach Lou Holtz the Medal of Freedom, he told reporters that Barr had not been diligent in investigating the widespread voter fraud he claims lost him the election.

“He hasn’t done anything, he hasn’t looked,” Trump said. “…They haven’t looked very hard, which is a disappointment, to be honest with you.”

When asked whether he still had confidence in Barr, Trump said he should be asked “in a number of weeks from now, they should be looking at all of this fraud.”

States continue to certify their results this week, including Wisconsin, Minnesota and Arizona, solidifying Biden’s election victory over Trump. Trump has refused to concede to Biden, but did say he will leave the White House if the Electoral College votes him out.

After electors from each state cast their official ballots on Dec. 14, the electoral votes will officially be counted by the U.S. Congress on Jan. 6.