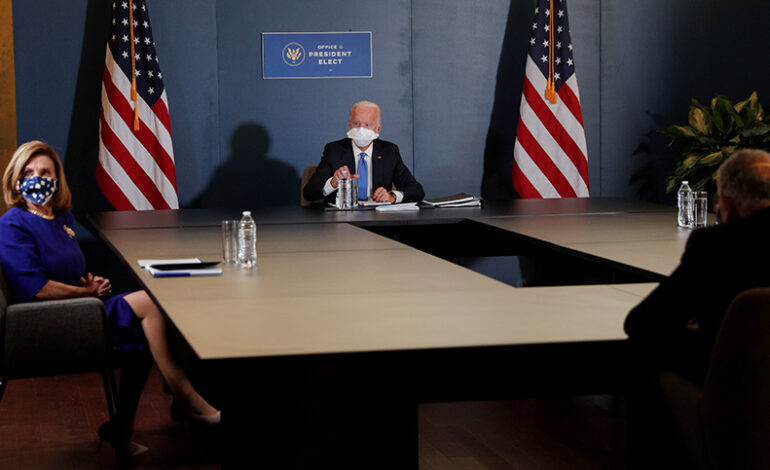 Congressional aides said there was still no agreement on how to meet Democratic demands for assistance to state and local governments and Republican calls for businesses to receive liability protection. Photo: Reuters

WASHINGTON, D.C. — A bipartisan effort in Congress to deliver a long-awaited infusion of COVID-19 relief to U.S. families and businesses remained hung up on Monday due to differences over aid to state and local governments and business liability protections.

A group of lawmakers from the Democratic-led House of Representatives and Republican-run Senate had been expected as early as Monday to roll out the formal text of a $908 billion bill to blunt the health and economic impact of the coronavirus pandemic into the early days of President-elect Biden’s administration. Biden is due to take office on Jan. 20.

The U.S. Chamber of Commerce said in a new memo to Congress that failure to enact relief would risk a “double-dip recession” — which occurs when a recession is followed by a brief recovery and then another recession — that would permanently shutter small businesses and leave millions of Americans with no means of support.

But after lawmakers and their staff worked through the weekend to finalize the package, congressional aides said there was still no agreement on how to meet Democratic demands for assistance to state and local governments and Republican calls for businesses to receive liability protection.

Considering the weakening of the economy coupled with a surge in COVID-19 cases at a time when previously approved relief mechanisms are due to expire, it would be “stupidity on steroids if Congress doesn’t act,” Democratic Senator Mark Warner, a member of the bipartisan group that wrote the proposal, told CNN’s “State of the Union” on Sunday.

Congress faces a tight deadline to enact legislation with the year-end holidays approaching. House Speaker Nancy Pelosi and Senate Majority Leader Mitch McConnell hope to attach a new coronavirus aid package to an emerging $1.4 trillion omnibus spending bill that Congress must pass by Friday, when funding for U.S. government agencies is due to expire.

Lawmakers enacted $3 trillion in aid earlier this year, but have not been able to agree on fresh relief since April.

A group of emergency aid programs implemented in response to the pandemic, including additional unemployment benefits and a moratorium on renter evictions, is set to expire at the end of December.

With U.S. coronavirus deaths topping 282,000 and pressure mounting for aid to a fragile economy, lawmakers and their staff worked through the weekend to put the finishing touches on the COVID-19 package intended to help those facing the greatest need, according to Senate Republican aides.

It would set new emergency assistance for small businesses, unemployed people, airlines and other industries during the pandemic. But lawmakers have opted not to include stimulus checks to individuals out of concern that a higher price tag could delay passage.

A framework for the bipartisan bill, unveiled earlier by the group of House and Senate lawmakers, has support from moderates and conservatives.

McConnell, who has pushed to limit spending to $500 billion, circulated a list of “targeted” relief provisions to Senate Republicans last week that he said President Trump would sign. White House officials have also said that Trump favors a targeted measure.

“If he sticks to his bill, which is an emaciated bill with no unemployment and no state and local relief, it’s not going to get anywhere because it doesn’t have broad support,” Schumer told a news conference on Sunday.