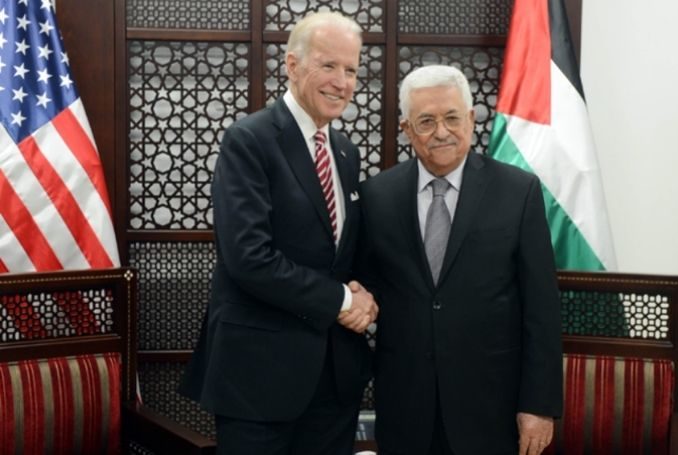 No one seemed as excited about the election of Joe Biden being the next president of the United States as Palestinian Authority President Mahmoud Abbas. When all hope seemed lost, where Abbas found himself desperate for political validation and funds, Biden arrived like a conquering knight on a white horse and swept the Palestinian leader away to safety.

Abbas was one of the first world leaders to congratulate the Democratic president-elect on his victory. While Israeli Prime Minister Benjamin Netanyahu delayed his congratulatory statement in the hope that Donald Trump would eventually be able to reverse the results, Abbas suffered no such illusions. Considering the humiliation that the Palestinian Authority experienced at the hands of the Trump administration, Abbas had nothing to lose. For him, Biden, despite his long love affair with Israel, still represented a ray of hope.

But can the wheel of history be turned back? Despite the fact that the Biden administration has made it clear that it will not be reversing any of the pro-Israel steps taken by the departing Trump administration, Abbas remains confident that, at least, the “peace process” can be restored.

This may seem to be an impossible dichotomy, for how can a “peace process” deliver peace if all the components of a just peace have already been eradicated?

The “peace process” is unlikely to deliver any kind of a just, sustainable peace in the future, when it has already failed to do so in the past 30 years

It is obvious that there can be no real peace if the U.S. government insists on recognizing all of Jerusalem as Israel’s “eternal” capital. There can be no peace if the U.S. continues to fund illegal Jewish settlements, bankroll Israeli apartheid, deny the rights of Palestinian refugees, turn a blind eye to de facto annexation under way in occupied Palestine and recognize the illegally-occupied Syrian Golan Heights as part of Israel, all of which is likely to remain the same, even under the Biden administration.

The “peace process” is unlikely to deliver any kind of a just, sustainable peace in the future, when it has already failed to do so in the past 30 years.

Yet, despite the ample lessons of the past, Abbas has decided, again, to gamble with the fate of his people and jeopardize their struggle for freedom and a just peace. Not only is Abbas building a campaign involving Arab countries, namely Jordan and Egypt, to revive the “peace process”, he is also walking back on all his promises and decisions to cancel the Oslo Accords and end “security coordination” with Israel. By doing so, Abbas has betrayed national unity talks between his party, Fatah and Hamas.

Unity talks between rival Palestinian groups seemed to take a serious turn last July, when Palestine’s main political parties issued a joint statement declaring their intent to defeat Trump’s “Deal of the Century.” The language used in that statement was reminiscent of the revolutionary discourse used by these groups during the First and Second Intifadas (uprisings), itself a message that Fatah was finally re-orienting itself around national priorities and away from the “moderate” political discourse wrought by the U.S.-sponsored “peace process.”

Even those who grew tired and cynical about the shenanigans of Abbas and Palestinian groups wondered if this time would be different; that Palestinians would finally agree on a set of principles through which they could express and channel their struggle for freedom.

Oddly, Trump’s four-year term in the White House was the best thing that happened to the Palestinian national struggle. His administration was a jarring and indisputable reminder that the U.S. is not — and has never been —“an honest peace broker” and that Palestinians cannot steer their political agenda to satisfy U.S.-Israeli demands in order for them to obtain political validation and financial support.

Now that Abbas is reassured that the Biden administration will bequeath him, once again, with the title of “peace partner”, a U.S. ally and a moderate, the Palestinian leader no longer finds it necessary to seek approval from the Palestinians

Alas, those efforts were short-lived. After multiple meetings and video conferences between Fatah, Hamas and other delegations representing Palestinian groups, Abbas declared, on November 17, the resumption of “security coordination” between his Authority and Israel. This was followed by the Israeli announcement on December 2 to release over a billion dollars of Palestinian funds that were unlawfully held by Israel as a form of political pressure.

This takes Palestinian unity back to square one. At this point, Abbas finds unity talks with his Palestinian rivals quite useless. Since Fatah dominates the Palestinian Authority, the Palestine Liberation Organization (PLO) and the Palestine National Council (PNC), conceding any ground or sharing leadership with other Palestinian factions seems self-defeating. Now that Abbas is reassured that the Biden administration will bequeath him, once again, with the title of “peace partner”, a U.S. ally and a moderate, the Palestinian leader no longer finds it necessary to seek approval from the Palestinians. Since there can be no middle ground between catering to a U.S.-Israeli agenda and elevating a Palestinian national agenda, the Palestinian leader opted for the former and, without hesitation, ditched the latter.

While it is true that Biden will neither satisfy any of the Palestinian people’s demands or reverse any of his predecessor’s missteps, Abbas can still benefit from what he sees as a seismic shift in U.S. foreign policy — not in favor of the Palestinian cause, but of Abbas personally, an unelected leader whose biggest accomplishment has been sustaining the U.S.-imposed status quo and keeping the Palestinian people pacified for as long as possible.

Although the “peace process” has been declared “dead” on multiple occasions, Abbas is now desperately trying to revive it, not because he — or any rational Palestinian — believes that peace is at hand, but because of the existential relationship between the PA and this U.S.-sponsored political scheme. While most Palestinians gained nothing from all of this, a few Palestinians accumulated massive wealth, power and prestige. For this clique, that alone is a cause worth fighting for.