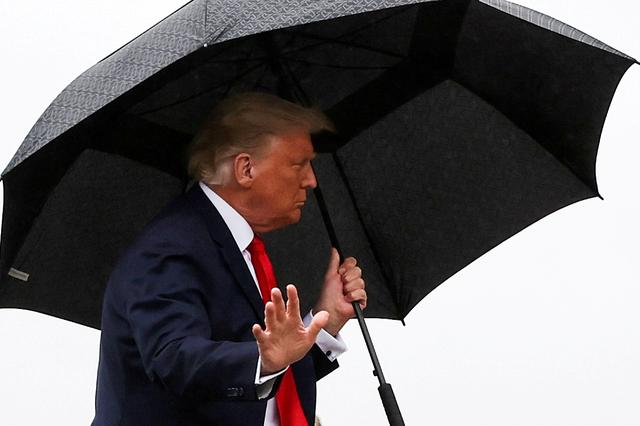 LANSING — Attorneys general from four states, including Michigan, responded on Thursday to a case brought to the U.S. Supreme Court by Texas Attorney General Ken Paxton and his colleagues from 17 other states to overturn the results of the Nov. 3 election.

President Trump, who lost the election to Joe Biden, has asked to intervene in the case as well, as he makes his last ditch effort to remain in the White House for another term. The lawsuit claims that the states amended election laws, using the COVID-19 pandemic as an excuse, and therefore undermined election integrity particularly in the area of mail-in ballots.

Biden won the election decisively, with 306 electoral votes, and the Electoral College is set to vote for him on Monday. This means the clock is running out on Trump’s legal attempts to completely throw out results in key battleground states, like Michigan.

Trump is also seeking to have Republican legislatures in those states send in slates of electors pledged to vote for him, an unprecedented move.

The Supreme Court could decide as soon as Friday whether to accept the case. Legal experts predicted that the court will swiftly dismiss the Texas filing.

Not only is the complaint here meritless, but its jurisdictional flaws abound and provide solid ground to dispose of this action – Dana Nessel

Michigan Attorney General Dana Nessel joined attorneys general from Pennsylvania, Wisconsin and Georgia to ask the Supreme Court to reject the lawsuit, which seeks to invalidate results from those states, which Biden won.

Nessel called Texas’ election challenge “an unprecedented one, without factual foundation and without a valid legal basis.”

“The base of Texas’ claims rests on an assertion that Michigan has violated its own election laws,” she said on Thursday. “Not true. That claim has been repeatedly rejected in the federal and state courts in Michigan, and just yesterday the Michigan Supreme Court rejected a last-ditch effort to request an audit. Not only is the complaint here meritless, but its jurisdictional flaws abound and provide solid ground to dispose of this action.”

Nessel and the AGs from the other other states argue that part of jurisdictional flaw with this lawsuit is Texas’ attempt to circumvent the country’s traditional judicial process by filing its complaint directly with the Supreme Court.

All four states say the claims filed by Texas have been soundly and summarily rejected in lower courts. A total of 20 states have filed a motion calling on the Supreme Court to reject the Texas filing.

The states say the high court shouldn’t get involved in a presidential election, that they not shown any Constitutional violations and that the claims have come too late and that the allegation have already been dismissed in lower courts.

Trump’s claims nationwide have been debunked by election officials and judges, both Republicans and Democrats. The campaign has lost more than 30 court cases alleging election fraud

“Trump and his ambassadors – like the Texas attorney general – have used our court system to wage a disinformation campaign baselessly attacking the integrity of our election system,” Nessel said. “In addition to just spreading falsehoods on social media platforms, through media channels and from seats positioned before our state legislatures, they’ve now done so at our country’s highest court.”

Trump and his campaign have made false claims about election officials in Michigan, saying that Republican poll challengers were prohibited from monitoring the counting of votes, that mail-in ballots cast were illegally cast or counted and other convoluted election fraud theories.

Trump’s claims nationwide have been debunked by election officials and judges, both Republicans and Democrats. The campaign has lost more than 30 court cases alleging election fraud.

There is some backing from the GOP for Trump, with 106 GOP House members signing a brief in support of the Texas motion.

Trump has asked Republican Texas Senator Ted Cruz to argue the case before the Supreme Court should the Court agree to hear it.

Paxton faces allegations in Texas of bribery and abuse of his office to benefit a political donor. Jonathan Adler, a professor at Case Western Reserve University School of Law, told Reuters it is possible that Paxton brought the case in hopes of getting a presidential pardon from Trump.

“It is fairly clear that one way you get a pardon is you rally to the president’s defense,” Adler said.

A spokeswoman for Paxton, who has denied wrongdoing, did not immediately respond to a request for comment.

Adler told Reuters that some of the conservative justices may vote to consider the lawsuit’s arguments on the grounds that they need to hear “original jurisdiction” cases. But even those justices are still very unlikely to go along with Paxton’s effort to upend the election, Adler added.

“My view is that the justices would be very wary of opening that can of worms,” Adler said.

Even if Paxton had made well-founded arguments, the remedy he requested from the justices is unrealistic, Josh Blackman, a professor at the South Texas College of Law told Reuters.

“It would be unthinkable for the court to just throw out that many votes,” Blackman said. “That’s just not how election law works.”