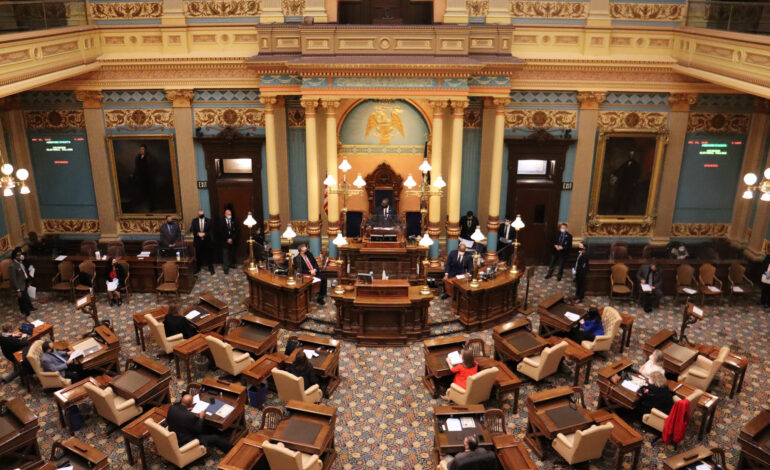 Meeting of the state's electors at the Michigan Capitol Building in Lansing, Monday, Dec. 14. Photo: Office of the Governor

LANSING — On Monday, Michigan joined the rest of the nation in casting its electoral votes, making official the November 3 election victory of President-elect Joe Biden and Vice President-elect Kamala Harris.

Michigan’s electors met in the Senate chamber of the Michigan Capitol Building, to cast all 16 electoral votes for Biden and Harris. Police escorted the electors to the building as credible threats against this key election component mounted in the state. Only a handful of protesters gathered during the cold afternoon in Lansing. President Trump and his loyalists have continued with false accusations of widespread election fraud in states he lost, with judges and election officials, both Democratic and Republican, swiftly dismissing all such conspiracy claims.

Under Michigan law, the electors are required to cast their ballots for the candidate who won the most votes during the general election. But Trump and his allies urged the GOP leadership in Michigan and others states to instead pick their electors, a request those leaders by and large denied.

I fought hard for President Trump. Nobody wanted him to win more than me. But I love our republic, too — Republican Michigan House Speaker Lee Chatfield

Governor Whitmer was at the meeting in the state’s Senate chamber on Monday and talked of a need to move on and look towards other priorities.

“In the end, Michigan has chosen a clear winner for the office of president of the United States, and for every elected office down the ballot,” Whitmer said. “No matter your party or who you cast your ballot for in November, now is the time to put this election behind us and focus on eliminating COVID-19 together.”

Even prominent Michigan Republicans continued to bolster the election integrity in the state, knowing it was questioned by the president himself.

“I fought hard for President Trump,” Lee Chatfield, Republican speaker of the Michigan House of Representatives, said in a statement. “Nobody wanted him to win more than me. But I love our republic, too. I can’t fathom risking our norms, traditions and institutions to pass a resolution retroactively changing the electors for Trump.”

The outgoing president’s hopes of clinging to power will rest with a special meeting of the U.S. Congress on Jan. 6, where those electoral votes — 306 for Biden — from across the country are then confirmed. California’s whopping 55 electoral votes meant Biden cleared past the 270 electoral votes needed to win the presidential election in the U.S.

Trump’s loyalists in Congress are plotting a last challenge to the election results, though most constitutional scholars say they will lose that effort. Such an effort would have to earn majority approval from both chambers of Congress on Jan 6. Democrats control the House of Representatives, while enough Republicans in the Senate have acknowledged Biden’s victory to ensure any challenge would probably fail.

Electors are usually party loyalists who represent the winning candidate in their state. Maine and Nebraska are exceptions in that they allocate some of their Electoral College votes based on which candidate won each of the states’ congressional districts.