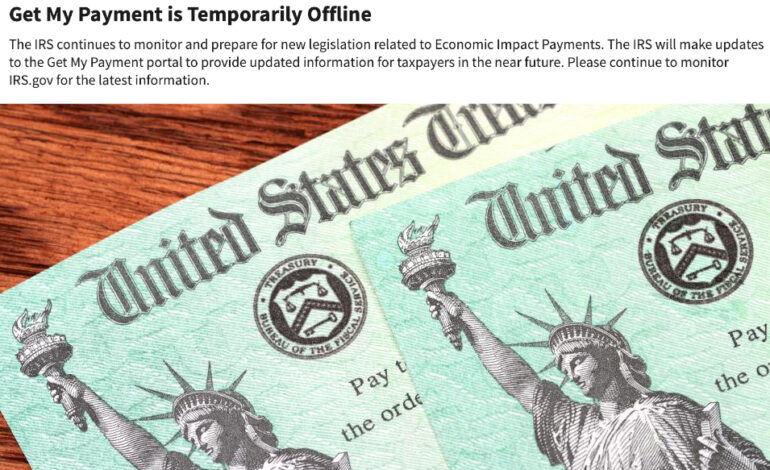 WASHINGTON D.C. – The online tool to track COVID-19 stimulus payments is temporarily down, as the IRS and U.S. Treasury Department began delivering a second round of payments Tuesday night. The IRS says the initial direct deposit payments begun arriving Tuesday night for some and will continue into next week. Paper checks will begin to be mailed on Wednesday, Dec. 30.

Many Americans have begun receiving their $600 COVID-19 economic impact payments, or stimulus checks, as negotiations over larger $2000 checks appear all but dead in the U.S. Senate on Wednesday.

The $600 payments were signed into law by President Trump on Sunday, after he initially refused to sign off on the bi-partisan Congressional bill because of the low amount of payments. Trump and Democrats have urged Republicans to increase those payments to $2000 for cash-strapped Americans who are dealing with a historic financial crisis due to the COVID-19 pandemic.

Those negotiations are now in the Senate, after the House passed a stand-alone legislation to increase payments to $2000. Senate leader Mitch McConnell (R-KY) filed new legislation late Tuesday linking the president’s demand for bigger checks with two other Trump priorities – repealing protections for tech companies like Facebook that the president complained are unfair to conservatives, and establishment of a bipartisan commission to review the 2020 presidential election he lost to President-elect Joe Biden.

Democrats are not expected to sign-off on the other two priorities, meaning the likely death of the stimulus check increase on the Senate floor.

Many Republicans oppose the $2000 checks, and hope they can save face and not be accused of inaction by lumping the bigger checks with these other priorities that Democrats oppose, which will likely mean the death of the bigger payments on the Senate floor

Trump and other backers have admonished the GOP leadership’s refusal to increase the amount of checks.

“The Senate Republicans risk throwing away two seats and control of the Senate,” said Newt Gingrich, the former congressional leader, on Fox News. He asked Republicans to “get a grip and not try to play cute parliamentary games with the president’s $2,000 payment.”

President Trump also re-upped his calls on McConnell and other Senate Republicans to take action on the bigger payment through a tweet on Wednesday.

Many Republicans oppose the $2000 checks, and hope they can save face and not be accused of inaction by lumping the bigger checks with these other priorities that Democrats oppose, which will likely mean the death of the bigger payments on the Senate floor. Some Republicans in the Senate do back Trump on the $2000 checks, like Georgia’s David Perdue and Kelly Loeffler, who are currently in a run-off election.

McConnell’s refused to act on the stand-alone stimulus increase on Wednesday, meaning the additional relief Trump wanted is virtually dead.

“We just approved almost a trillion dollars in aid a few days ago… if specific, struggling households still need more help,” the Senate will consider “smart targeted aid. Not another firehose of borrowed money” McConnell said.

Meanwhile, Democrat Senators led by Bernie Sanders (I-VT) that support the relief aid are blocking action on overturning of a Trump veto of the latest defense bill, until a vote can be taken on the $2,000 checks.

“The working class of this country today faces more economic desperation than at any time since the Great Depression of the 1930s,” Sanders said. “Working families need help now.” He also tried to force a vote on the relief checks, but McConnell objected a second time.