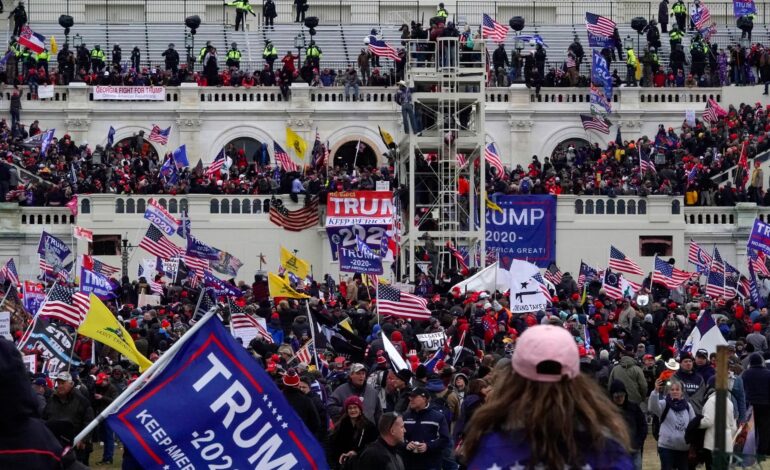 Leaders from around the world have been commenting on the pro-Trump riots that took over Capitol Hill on Wednesday. Photo: Bonnie Jo Mount/ The Washington Post

Leaders from around the world have been commenting on the pro-Trump riots that took place at Capitol Hill during the election certification.

Canadian Prime Minister Justin Trudeau said that he was watching the events minute by minute.

“Canadians are deeply disturbed and saddened by the attack on democracy in the United States, our closest ally and neighbor,” he posted on Twitter. “Violence will never succeed in overruling the will of the people. Democracy in the U.S. must be upheld — and it will be.” The chairman of the Russian Upper House Foreign Affairs Committee, Konstantin Kosachev, said that the events prove a crumbling democracy.

“The celebration of democracy is over,” he said in a Facebook post. “Alas, this is rock bottom, I say this without a hint of gloating. America no longer defines the course, and therefore has lost all right to set it. And even more so to impose it on others,”

“What happened in America showed what a failure Western democracy is,” he said. “A populist man damaged the reputation of his country,”

“A rogue president who sought vengeance against his OWN people has been doing much worse to our people — and others — in the past four years,” he said. “What’s disturbing is that the same man has the unchecked authority to start a nuclear war; a security concern for the entire international community.” “Last year, President Trump extended painful economic sanctions placed on Zimbabwe, citing concerns about Zimbabwe’s democracy,” he said. “Yesterday’s events showed that the U.S. has no moral right to punish another nation under the guise of upholding democracy. I’d like to again congratulate President-Elect Joe Biden on his confirmation as the 46th president of the United States. Zimbabwe is, as it always has been, ready to work together as friends and partners with the U.S. for the benefit of both our peoples.” The spokesman for U.N. Secretary-General Antonio Guterres said that Guterres was “saddened” by the events.

“In such circumstances, it is important that political leaders impress on their followers the need to refrain from violence,” Stephane Dujarric said. “As well as to respect democratic processes and the rule of law,”

French President Emmanuel Macron said that this is not American.

“I am sure that the American people and their elected representatives will know how to fend off this attack,” Ashkenazi said. “And will continue to defend the values on which the United States was founded.”

“I supported the ideas and positions of the Republicans, of the conservatives, of Trump,” he said. “But a legitimate vote is one thing, going to parliament and clashing with the police is quite a different matter. That’s not political vision, that’s madness.”