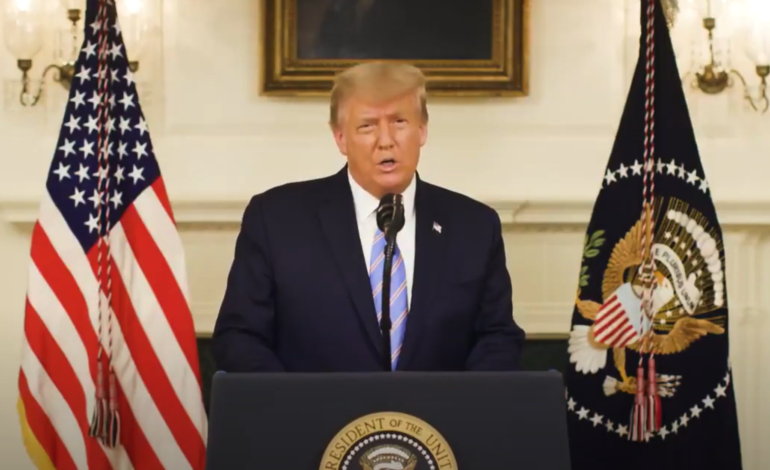 Outgoing President Trump delivers a video message on Thursday, Jan. 7, acknowledging his loss to Joe Biden and condemning the siege of the U.S. Capitol on Wednesday, Jan. 6.

WASHINGTON, D.C. — After widespread condemnation of outgoing President Trump’s encouragement of a deadly insurrection of the U.S. government, Trump changed his tune and acknowledged his loss to Joe Biden on Thursday.

Just a day before, after a storm of rioters broke into the heavily restricted U.S. Capitol building to interrupt the counting of electoral votes to affirm Biden’s victory, Trump told his supporters, “We love you. You’re very special.”

But on Thursday Trump not only condemned the actions of the rioters, which led to four deaths, theft and damage of government property and mass chaos among government workers trying to rush to safety, he also acknowledged the dangers of COVID-19 to Americans and talked of a peaceful transition of power.

“Now Congress has certified the results, and the new administration will be inaugurated on Jan. 20,” Trump said in a video message of Twitter. “My focus now turns to ensuring a smooth, orderly and seamless transition of power. This moment calls for healing and reconciliation.”

Trump had been blocked from posting by Twitter and Facebook at least temporarily until the Jan. 20 inauguration of Biden, but that ban on Twitter seemed to have been lifted for Thursday’s message.

Trump’s Wednesday message to rioters reiterated his false claims of election fraud, but told rioters to go home in peace. The House chamber reconvenes and condemns the violent riot led by pro-Trump supporters inside the Capitol Building. Photo: Reuters

Now Congress has certified the results, and the new administration will be inaugurated on Jan. 20. My focus now turns to ensuring a smooth, orderly and seamless transition of power. This moment calls for healing and reconciliation. – President Trump

The change in tone came after a full day of lawmakers and government officials on both side of the aisle condemning Trump’s role in inciting the violence in D.C., with many calling for his immediate removal with just 13 days to go in his presidency.

Members of Trump’s cabinet reportedly discussed invoking the 25th Amendment, as House Speaker Nancy Pelosi (D-CA) warned that if Vice President Mike Pence did not use the amendment and declare Trump unfit for office, the House would be ready to begin impeachment proceedings. Republican Congressman Adam Kinzinger (IL) and Chuck Schumer (D-NY), who will be the new senate majority leader, voiced their support.

On Thursday U.S. Rep. Rashida Tlaib (D-Detroit) led a letter by some members of the House of Representatives to call on Congressional leadership to reconvene both chambers and immediately begin impeachment proceedings against Trump.

“Donald Trump must be removed from office immediately,” Tlaib said. “I am co-leading the introduction of Articles of Impeachment and am joining efforts to hold the congressional members who supported efforts that led to yesterday’s attack accountable. There is no place in the People’s Congress for so-called representatives who would subvert our democracy and the will of the voters. Congress must reconvene now and take action.

“The president violated his oath of office and incited a violent attack on our Capitol and democracy,” said U.S. Senator Gary Peters (D-Michigan). “He poses a clear and present danger to the American people and our national security. He should immediately be removed from office. I stand with many others – including the National Association of Manufacturers – in supporting the Vice President and Cabinet invoking the 25th Amendment.”

At a rally early Wednesday, before the violence ensued, Trump spoke to the crowd, encouraging them to march to the building and saying, “You’ll never take back our country with weakness, you have to show strength and you have to be strong.” His lawyer Rudy Giuliani called for a “trial by combat.”

Impeachment would largely be symbolic because of the short time Trump has left in office. Additionally, Thursday’s message from Trump could put some of the anger against him to rest. The 25th Amendment would be the fastest way to remove Trump, though Pence did not indicate by Thursday night if he would make that happen.

In the aftermath of a tumultuous Wednesday, White House staff and prominent members of Trump’s administration began distancing themselves from him.

Former Chief of Staff Mick Mulvaney handed in his resignation as U.S. special envoy to Northern Ireland, saying, “I can’t do it. I can’t stay.”

Resignation also came from someone not part of Trump’s administration, but central to the events of Wednesday. U.S. Capitol Police Chief Steven Sund resigned Thursday amid criticism of the department’s response to rioters who stormed the Capitol. The response by police brought up questions of law enforcement handling of earlier protests by people enraged by the illegal killing of George Floyd. In Detroit and other cities, those protests resulted in mass arrests, beatings and teargassing of unarmed protesters.

Such discrepancy in response pushed conservative media personality Joe Scarborough to question whether police’s lack of preparation and response would have been different if the protesters weren’t largely White. Supporters of President Trump demonstrate on the second floor of the U.S. Capitol building. Photo: Reuters

Former CIA Acting Director Michael Morell went on CBS News to say, “(This) is a simple reflection of the systemic racism that exists in our society and that we need to get rid of.”

Nevertheless, four people did die in the event, three from medical emergencies related to the rioting and one from being shot inside the Capitol as she tried to climb through a broken door. Numerous arrests were made, some on the scene and later for breaking an imposed curfew. Federal prosecutors brought 55 cases against members of the mob.