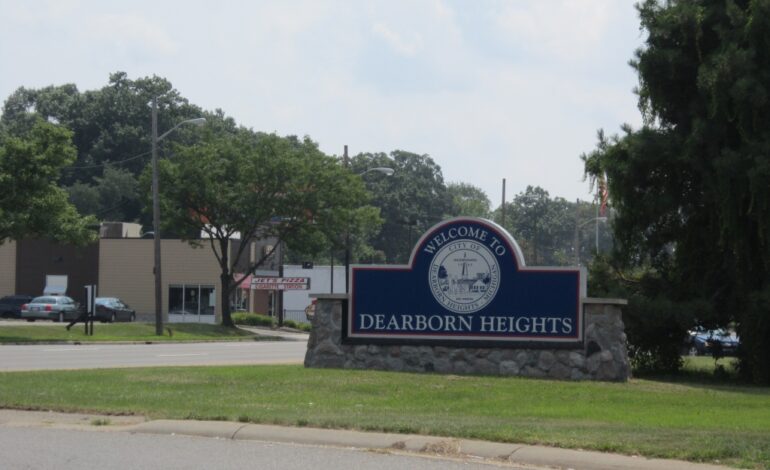 With the recent passing of Mayor Daniel Paletko, the Dearborn Heights City Council was left with big shoes to fill, a task they have so far failed to accomplish.

DEARBORN HEIGHTS — With the recent passing of Mayor Daniel Paletko, the Dearborn Heights City Council was left with big shoes to fill, a task they have so far failed to accomplish.

Originally, only the appointment of the seventh Council member had been on the agenda.

For the third meeting in a row, the Council failed to fill the vacant seat left when former Councilwoman Lisa Hicks-Clayton was elected city treasurer in November.

Of the four candidates, Nancy Bryer removed herself from the list, leaving William “Toby” Zurenko, Zouher Abdel-Hak and Mo Baydoun in the running.

During a study session prior to the meeting, the Council discussed how they will proceed in appointing a mayor.

“After going through many hours of research on this, I truly believe we should have had a special meeting the week after the mayor’s passing,” Muscat said. “It’s imperative that we shall appoint a mayor, that’s exactly what our charter says and I don’t want to wait the 30 days. That’ll take away our options and we should also add that, as far as I’m concerned, on the agenda today.” With three different attorneys providing differing legal opinions, Malinowski-Maxwell said she reached out to the attorney general’s office for their thoughts.

“I did reach out to the attorney general for a non-biased opinion today,” she said. “We had four opinions from three different attorneys; one attorney actually did change their opinion after they wrote it for us. There seems to be a question of who’s able to vote and who’s not able to vote.”

In addition to reaching out to the attorney general’s office, Malinowski-Maxwell said she also reached out to former Mayor Ruth Canfield for guidance.

“I did speak with Ruth Canfield today,” she said. “Because I figured if anyone could know what’s going on, it would be her, since the Canfields have been in the city for forever since the beginning of time. And she did say you find out who was interested and that you could vote on it.” While most of the Council agreed that the appointment should happen sooner rather than later, when they got to the regular City Council meeting, they tied in their votes for whether or not to proceed with appointing a mayor.

Constan, Wencel and Malinowski-Maxwell voted no on the topic and Bazzi, Muscat and Abdallah voted yes.

One resident suggested the appointment of former Treasurer John Riley.

“To try to put this tactfully, has anyone considered questioning John Riley to take over the mayor’s position on a temporary basis?” the resident said. “Mr. Riley has been with the city for many years, knows the ins and outs, and I think he would be a fine candidate if so asked.”

Until the Council appoints a mayor, Malinowski-Maxwell will be acting as Council chair and mayor pro-tem.

The Council agreed to have a special meeting on Tuesday, Jan. 19 to discuss the matter further.

During the Council meeting, text messages that had transpired after the first vote on a Council member appointment were read aloud.

The text messages were originally referenced during the Dec. 8 Council meeting when Malinowski-Maxwell said that she was threatened and bullied over the vote.

“I wasn’t going to say anything, but in regards to replacing the person on Council, I have personally received a lot of calls, voicemails, text messages, emails, and one text could have possibly been a violation of the Open Meetings Act if I didn’t write in there, ‘do not respond,’” she said. “I want to say I don’t react well to threats or being bullied. I was threatened and bullied into who I should vote for or who I should not vote for.”

While Malinowski-Maxwell refused to say who had sent the threatening text messages, a FOIA request caused the release of the text messages in question, which had been sent from Muscat’s wife, Lisa Muscat.

During the Jan. 12 meeting, Councilman Muscat asked Malinowski-Maxwell to read the messages aloud.

“This past week I received an email about a FOIA request for someone that bullied and threatened you,” he said. “The only text messages that you sent back were the ones from Lisa Muscat. If you have them, I’d like for you to read them so that everyone can see that there was no bullying and no threatening.”

Malinowski-Maxwell clarified that the FOIA request was for any messages pertaining to the vote to appoint a Council member.

“Hi Denise, with everything that is going on with the mayor and City Council, I would hope that you are voting for Zouher to fill Lisa’s spot,” the text from Lisa Muscat received on Dec. 7 read. “Mo has done nothing for us and the city and will not stand behind you like we will for the mayor position. Remember who is on our side and has spoken up for us as a city. Please don’t upset the balance on the Council.”

Screenshot of text message from Lisa Muscat sent to Malinowski-Maxwell on Dec. 7

Prior to the Dec. 8 meeting, Malinowski-Maxwell received another text message from Lisa Muscat.

“I hope you will consider what we have been fighting for and that we need to continue our momentum,” the text read. “Please go with Zouher so we can finish our very important work. Thank you.”

Screenshot of a text message sent from Lisa Muscat to Malinowski-Maxwell prior to the City Council meeting on Dec. 8

Moments after Malinowski-Maxwell voted for Baydoun, she received another text message.

“I’m in complete utterly shock at the way you voted,” the message from Lisa Muscat read. “I am sure you have an agenda, but I hope and pray that it never comes to fruition. You liked all the information you got from Zouher, but you just slapped him in the face. You have lost my vote and help if you decide to run for mayor. You think Mo is going to help you, he’s on there for the mayor’s agenda and his own agenda. I know now you can’t be trusted!”

Screenshot of a text message sent from Lisa Muscat to Malinowski-Maxwell after she voted for Mo Baydoun on Dec. 8

Malinowski-Maxwell told The Arab American News that everyone can interpret the text messages differently and that the public can decide whether they were threatening or bullying in nature for themselves.

Muscat told The Arab American News that his wife is entitled to her own opinions.

“This should be my wife who speaks with you,” he said. “She’s is the one who sent the text messages, not me. She is also entitled to express her voice and opinions on any subject.”