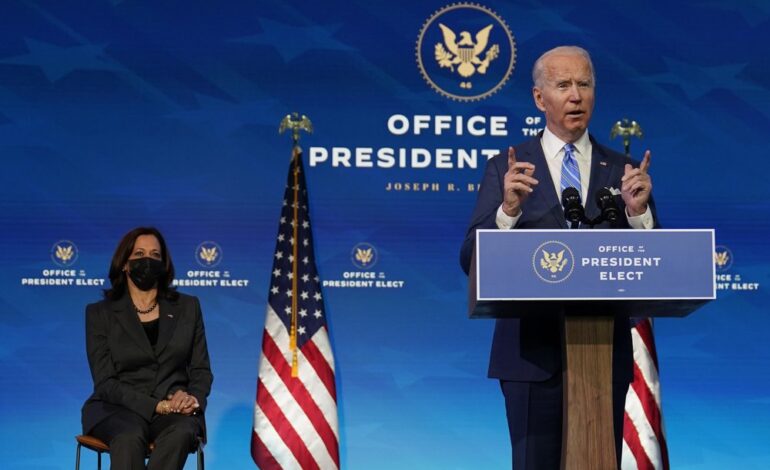 The "Biden-Harris American Rescue Plan" includes an increase of unemployment benefits to $400 a week, extended to September; moratoriums on foreclosures and evictions until September; and funding for rental and utility assistance. Photo: Matt Slocum/AP

Boost for the economy

The COVID-19 virus has killed 385,000 people in the U.S. as of Thursday, has left scores unemployed and pushed small businesses like restaurants into economic disarray.

Many Republicans in Congress will reject the proposal due to the price tag for more payments. But beyond this pushback, Biden’s proposal will be helped by the fact that his fellow Democrats will control both the House and the Senate.

The new proposal is an effort to set the tone of his presidency from the outset, directing energies towards economic recovery while outgoing President Trump spends his final days in office denying his involvement in a siege of the U.S. Capitol on Jan. 6 by a mob of his supporters, egged on by Trump and allies, who say without proof that Biden outright stole the 2020 presidential election.

The U.S. House voted to impeach Trump on Wednesday, making him the first president in U.S. history to be impeached twice. Ten of his fellow Republicans joined Democrats to charge him with inciting an insurrection at the Capitol, which left five dead, including one police officer.

Biden’s plan will also attempt to shoehorn other Democratic policy aims such as an increase of the minimum wage to $15 an hour, expanding paid leave for workers and increasing tax credits for families with children. Congressional Republicans are expected to push back against the overall proposal because of these other provisions and will likely introduce their own, like business liability protection, as they did with the last round of COVID relief negotiations.

“With the bold leadership of a new White House, we can finally enact a national COVID-19 strategy that will support businesses, safely open schools and vaccinate the public while keeping our most vulnerable patients healthy and safe,” she said. “In the days ahead, I will work closely with the incoming Biden-Harris administration to make this plan a reality.”

The Associated Press reports that Biden’s new bill would be paid for with borrowed money, adding to trillions in debt the government has already incurred to confront the pandemic. Aides said Biden will make the case that the additional spending and borrowing is necessary to prevent the economy from sliding into an even deeper hole and that interest rates are low, making debt more manageable.

If passed, the rescue package will bring the total amount of stimulus injected into the U.S. economy to $5.2 trillion, enough of a boost for the economy to recoup all its decline from the COVID-19 recession by the third quarter of 2021, Moody’s economist Ryan Sweet told Reuters.