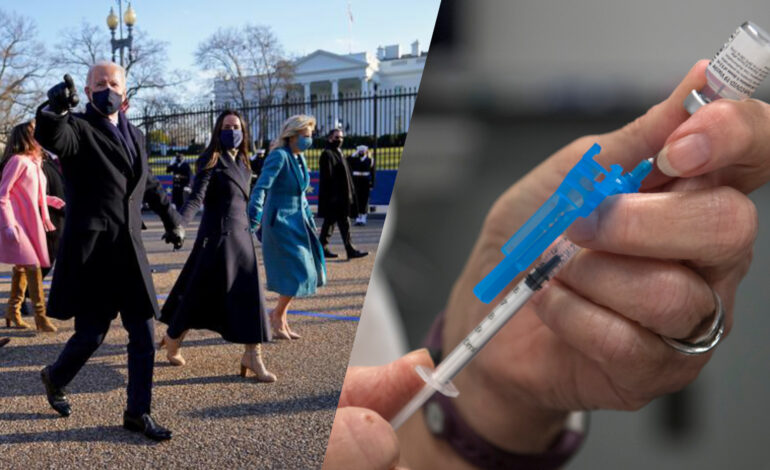 WASHINGTON, D.C. — After kicking off his first day as president with a slate of executive actions, President Biden turned his attention to boosting supplies of the COVID-19 vaccine with an ambitious plan.

Biden signed 10 executive orders as expected on Thursday. These ramp up the purchase and distribution of the vaccine, with additional measures to expand testing and aid states in their response to the pandemic. Biden also issued a detailed plan to tackle the pandemic in the months ahead. That plan appears in full on the White House website.

The pandemic hit a grim milestone in the U.S. earlier this week, surpassing 400,000 Americans’ deaths due to the virus. States have run into problems distributing enough vaccines to vulnerable populations to build confidence that the pandemic can be brought under control in the coming months.

Biden has pledged to provide 100 million doses of the coronavirus vaccine during his first 100 days in office. Though the administration has the supplies and resources to meet this goal, it still needs the U.S. Congress to expand vaccines to the broader population.

“The death toll will likely top 500,000 next month and cases will continue to mount,” Biden said in his remarks on his COVID-19 response plan on Thursday. “But let me be clear, we will get through this. We will defeat this pandemic… help is on the way.”

So far, states like Michigan have included people 65-years-old and older and some essential workers like teachers into their eligibility fold. This is on top of the healthcare workers who were in the first phase of vaccine deliveries.

But hard hit counties like Wayne have struggled to provide these vaccines to residents. Wayne County announced this week it had to reschedule about 1,400 people who were awaiting their first dose of the vaccines, due to a depleted supply.

The Biden administration seeks to increase the number of vaccination sites by creating federal community vaccination centers in stadiums, gymnasiums and conference centers run by first responders, military and other workers. Biden’s plan includes using the Defense Production Act to pump up production and release more federal reserves of the vaccine.

Biden will soon be sending to Congress his American Rescue Plan, which holds $400 million of the pandemic response as part of a total $1.9 trillion stimulus package. Democrats have gained power in the senate with a 50/50 ratio, but the stimulus bill will likely see resistance from Congressional Republicans once introduced.

Biden’s transition team has said it is starting from scratch with a vaccine program due to a lack of information sharing from the previous administration.

Though former President Trump was able to launch a vaccine program in unprecedented time, states were left in the dark as to why stocks of vaccines remained held back, with Pfizer waiting for the administration in its last days to give it addresses to send doses of its vaccine.

Part of this push for vaccines is Biden’s plan to reopen K-12 schools within 100 days, something teachers unions have said may be too soon for students and families to be out of the danger zone of community spread.

Under Biden, the U.S. will also rejoin the World Health Organization (WHO) and join the COVAX facility, which aims to deliver vaccines to poor countries.

“It going to be really very important. When you’re dealing with a global pandemic you have to have an international connectivity,” Biden’s chief medical adviser, Dr. Anthony Fauci, said on Thursday.

In the U.S., Biden will also issue mask mandates, which will require mask wearing in airports and on certain public transportation, including many trains, airplanes and intercity buses.

The U.S. Department of Health and Human Services has said Moderna and Pfizer-BioNTech are scheduled to ship about 8.6 million doses next week, split evenly between those set aside for first shots and second shots.