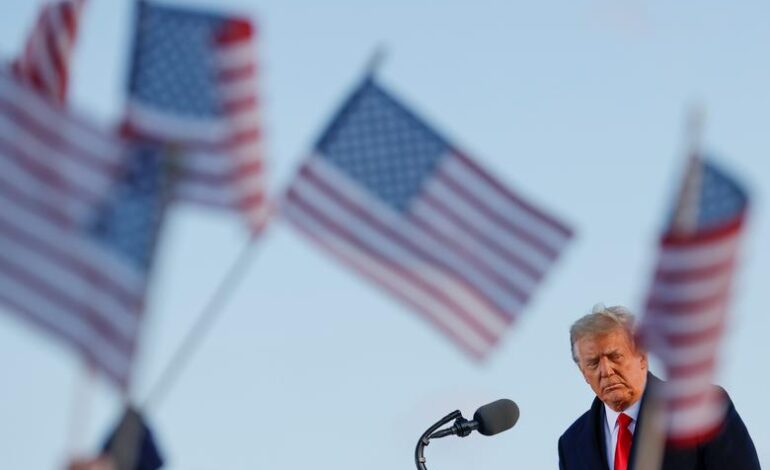 Donald Trump speaks at Joint Base Andrews, Maryland, Jan. 20, before leaving for Florida on his final day as president of the United States. Photo: Carlos Barria

WASHINGTON, D.C. — Senate Majority Leader Chuck Schumer announced that the House’s article of impeachment will be delivered to the Senate on Monday, as Senate Republicans hope to delay the impeachment trail of former President Trump. The single article accuses Trump of inciting an insurrection on the U.S. Capitol on Jan. 6, as

Technically, with the delivery of the article, the Senate trail should start at 1 p.m. on Tuesday. But Senate is still in negotiations around when the trial will actually begin, and Schumer’s announcement puts a new deadline on that negotiation.

McConnell has said he wants to organize the trial so that the ceremonial functions, like the formal reading of the impeachment article, would occur next week on Thursday, Jan 28. McConnell wants Trump to have another week to answer the article by February 4, and the following week Trump’s team would submit a pre-trial brief, before the trial would begin.

The pro-Trump riot inside the highly restricted Capitol building led to five deaths, including a police officer. Many, on both sides of the aisle, including McConnell, hold Trump responsible for his part at an earlier rally in encouraging his supporters to act, while promoting false claims of voter fraud in the election won by President Biden. McConnell has not expressed whether he is willing to convict the former president.

“The Senate will conduct a trial of the impeachment of Donald Trump,” Schumer said. “It will be a full trial. It will be a fair trial. But make no mistake, there will be a trial, and when that trial ends, senators will have to decide if they believe Donald John Trump incited the insurrection against the United States.”

Senate Minority Leader Mitch McConnell has proposed that the Senate give Trump’s legal team two weeks to prepare for the trial and delay its start until mid-February. It was unclear as of Thursday whether Democrats would go along with the plan or send the impeachment article over to the Senate on Friday and start the trial.

There is broad support among GOP Senators to argue that putting an ex-president on trial is unconstitutional, though legal scholars say that argument does not have strong legal footing.

Trump has acquired at least one lawyer for his defense, South Carolina lawyer Butch Bowers, so Democrats could send the impeachment article to the Senate on Friday.

McConnell and Senate Majority Leader Chuck Schumer are in talks of a power-sharing deal for the evenly split Senate, and the impeachment trial procedures are a part of this negotiation. McConnell does not want Schumer do away with the requirement for a super majority of 60 votes to pass legislation. Without this requirement, important legislation like Biden’s $1.9 trillion COVID stimulus bill, could be passed my a simple majority, with Vice President Harris breaking the tie in favor of Democrats incase of a 50-50 gridlock.